Milwaukee’s Lincoln Center Of The Arts Equipped With Martin Audio

DP Design recently installed a full complement of Martin Audio Wavefront Precision Mini (WPM) that doubles as a sound system for a Milwaukee public middle school, Lincoln Center of the Arts, during the week and the Cornerstone Church on Sundays.

According to DP Design’s David Price, “we originally installed WPM for Cornerstone Church in the building that houses Lincoln Center of the Arts which was in turn gifted to the school for their use during the week. Since we’ve integrated the system into the school, they’re very excited and happy about it.

“The school’s previous PA was a 30-year old hanging center cluster for a mammoth space that seats about 1500 people and most of the drivers were blown so the system was virtually unintelligible––you couldn’t understand what anyone was saying. That, plus the room is all hard surfaces with a plaster ceiling that has elaborate concave structures, a concrete floor and hard wood seats so there’s no absorption anywhere in the space.” 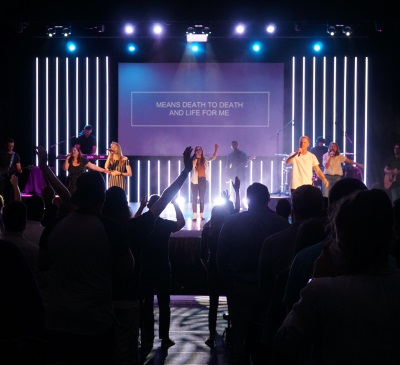 Price and his team designed and installed a system that includes eight WPM a side with two ground-stacked SXH218 subs in front of the stage on the left and right side.

It’s powered by two Martin Audio iKON iK81 and one iK42 amps with the system set up for one-box resolution––maximum optimization––that easily provides front to back and side to side coverage along with the necessary control to handle all of the reflective surfaces in the room.

“Flying the WPM system made an immediate and dramatic difference,” Price points out. “Sometimes they’ll have school assemblies or performances where they only have the first section of 500 seats filled up. So, we created presets for them based on WPM’s control with a floor level, a raised seating level and a mezzanine level so they can cover any size room they need it to be.

“In addition to worship services for Cornerstone on Sunday where the system reproduces speech and contemporary worship music with high volume electric bands and vocalists, the school uses WPM for school meetings, live talent shows, dance and theatrical productions.

“These productions feature different musical performances that include an orchestra of up to 75 instruments with woodwinds, brass and strings. They haven’t used mics in the past but now want to start miking the soloists for some of the shows which should focus the sound even more.”

“Bottom line, the system sounds really good for all kinds of music––from larger acoustic ensembles to hip hop, rap and R&B groups at the school and rock bands at the church––the WPM speakers and SXH218 subs are amazing. There’s nothing left to be desired with every kind of music and speech reproduction, it’s all great. In fact, one of the parishioners thought it sounded as good as Summerfest, a famous music festival here in Milwaukee.”