Key things to understand before tackling the techniques of miv placement

Microphone techniques (the selection and placement of microphones) have a major influence on the audio quality of a sound reinforcement system.

In order to provide some background for these techniques it is useful first to understand some of the important characteristics of the microphones themselves.

The most important characteristics of microphones for live sound applications are their operating principle, frequency response and directionality.

Secondary characteristics are their electrical output and actual physical design.

Operating Principle
The type of transducer inside the microphone, that is, how the microphone picks up sound and converts it into an electrical signal.

A transducer is a device that changes energy from one form into another, in this case, acoustic energy into electrical energy. The operating principle determines some of the basic capabilities of the microphone. The two most common types are Dynamic and Condenser. 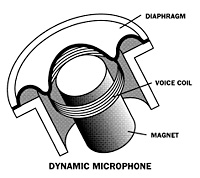 A small coil of wire (voice coil) is attached to the rear of the diaphragm and vibrates with it. The voice coil itself is surrounded by a magnetic field created by a small permanent magnet. It is the motion of the voice coil in this magnetic field which generates the electrical signal corresponding to the sound picked up by a dynamic microphone.

Dynamic microphones have relatively simple construction and are therefore economical and rugged. They can provide excellent sound quality and good specifications in all areas of microphone performance. In particular, they can handle extremely high sound levels: it is almost impossible to overload a dynamic microphone. In addition, dynamic microphones are relatively unaffected by extremes of temperature or humidity. Dynamics are the type most widely used in general sound reinforcement. 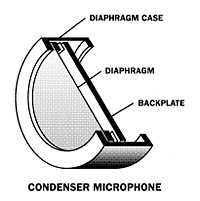 Condenser microphones are based on an electrically-charged diaphragm/backplate assembly which forms a sound-sensitive capacitor. Here, sound waves vibrate a very thin metal or metalcoated- plastic diaphragm.

The diaphragm is mounted just in front of a rigid metal or metal-coated ceramic backplate. In electrical terms this assembly or element is known as a capacitor (historically called a “condenser”), which has the ability to store a charge or voltage.

All condensers contain additional active circuitry to allow the electrical output of the element to be used with typical microphone inputs. This requires that all condenser microphones be powered: either by batteries or by phantom power (a method of supplying power to a microphone through the microphone cable itself). There are two potential limitations of condenser microphones due to the additional circuitry: first, the electronics produce a small amount of noise; second, there is a limit to the maximum signal level that the electronics can handle. For this reason, condenser microphone specifications always include a noise figure and a maximum sound level. Good designs, however, have very low noise levels and are also capable of very wide dynamic range.

Tim is a senior application engineer with Shure. He is noted for his teaching ability, presenting seminars about sound to a wide range of audiences and is the author of the Audio Systems Guide For Houses Of Worship.
All Posts
PrevPreviousRedeemer Church Completes Construction With CSI And Ashly Audio
NextShow Central: News & New Products From InfoComm 2015Next
Study Hall Top Stories
Explore All Study Hall