One of the jems in my microphone collection is a Turner 44D. I looked everywhere for a clean model and finally lucked upon a mint condition unit complete with the box, cable and paperwork.

I’ve always thought Turner made some of the best looking Art Deco-style microphones. While this model is a bit more modern than many of Turner’s more famous vintage mics, it’s still a beauty. 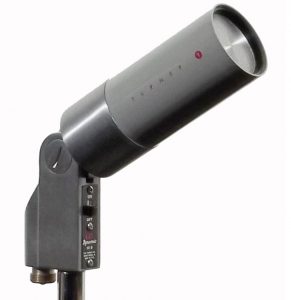 Most folks know the Turner name for its line of mics designed for live sound, broadcast and 2-way radio applications but — true story — the company actually started in the funeral business. In 1925, David Turner realized that it was hard for people to hear the minister when attending services in the family’s funeral home in Cedar Rapids, IA, so he hired a local radio engineer named Everett Foster to put together a PA system for the chapel.

The PA worked well enough that in 1930, Turner was asked to bring it to a national meeting of morticians. Other funeral directors in attendance were so impressed with the system that they wanted their own, and in 1931, the Turner Company was born. The fledgling enterprise originally built sound systems as well as mics, but soon concentrated on mics as its core business.

During World War II, the entire production of the Turner company was dedicated to making electronic components and mics for the military. After the war, the company sold its own products and also made mics and elements for other companies including Heath, Telectro, Webster Electric, Stromberg-Carlson and Motorola. In the late 1960s, the Turner Company was sold to the Conrac Corporation, which sold it to Telex in 1979.

All are omnidirectional, included an on-off switch and shipped from the factory with a 12-foot long shielded cable that is un-terminated at the console end. The cable connects using an Amphenol screw-on style connector located at the rear of the mic base right behind the stand mount. A wiring diagram helps the end user install the proper connector for their application.

The dynamic models are equipped with a unique feature that the crystal and ceramic versions lack, which lets the end user tailor the low-end response. It is comprised of two threaded vent ports on the rear of the mic. Install the supplied screw in the right side vent and the mic is adjusted for full frequency response; install it in the left side vent for a low-end cutoff at 200 Hz.

The 44 has a satin chrome finish over a die cast zinc alloy combined with cycolac (an early form of ABS plastic). The spec sheet states “this combination of materials guarantees many years of fine service.” The sides of the plastic front end are engraved with the Turner name and logo, and filled in with red. Early production models sported an additional red Turner logo just under the switch.

To me, the combination of metal and plastic materials combined with sleek modern style gives this mic a classic look all its own.

Craig has worked in a wide range of roles in professional audio for more than 30 years in a dynamic career that encompasses touring, theater, live televised broadcast events and even concerts at the White House. Currently he owns and operates Tech Works, a regional production company that focuses on corporate events based in Reno.
All Posts
PrevPreviousMeyer Sound Resumes The “Long Strange Trip” With Dead & Company 2021 Tour
NextJBL Monitors On Tour With Bruno Mars For Live Mixing & Backstage RecordingNext
Study Hall Top Stories
Explore All Study Hall