Former chief engineer for the audiophile Telarc label utilizes the “old school” method of mixing live on the fly with spectacular results.

There are few more versatile engineers today than Michael Bishop, easily switching between the classical, jazz, and pop worlds with ease. Shunning the current recording method requiring massive overdubbing, Michael instead mostly utilizes the “old school” method of mixing live on the fly with spectacular results.

A former chief engineer for the audiophile Telarc label and now with his own Five Four Productions, Michael’s highly regarded recordings have become reference points for the well done and have resulted in 10 Grammy awards. In this excerpt from the 4th edition of my Recording Engineer’s Handbook, Michael discusses his approach to orchestral recording.

I know you do a lot of sessions where the mix is done on the fly either direct to 2 track or multitrack with no overdubs. How do you handle leakage?

I let leakage be my friend. Leakage is inevitable for the kind of recording that I’m doing because I like to keep the musicians together as a group in the studio rather than spreading them all out with isolation for everybody. That means that there’s plenty of leakage and I just deal with it.

I don’t have to have the isolation because typically I’m not doing overdubs and replacement of tracks. We fix things by doing new takes to cover the spots that we need to cover. They’ll take a running start at it to cover the measures that they need and we’ll edit it later, which is very much a classical orchestra style of recording.

By keeping people close together the leakage generally becomes less of a problem. The further apart that you get the musicians and the more things that you put in between causes delays and coloration, particularly on the off-axis side of a microphone, which is already colored. This only exaggerates the effect of the leakage. That’s something I learned from John Eargle’s very first microphone handbook. Using omni’s, I learned how to work with the leakage in the room and make it a pleasant experience instead of something to be avoided.

Are you using primarily omni’s?

I like to start with an omni before anything. Now there are particular instances where I’ll immediately go to something like a figure 8, but I’ll use figure 8’s and omni’s more than anything.

Does the type of music you’re recording determine your microphone selection?

Of course, because there are certain things that the musicians or the producer or even the end listener expects to hear on a particular style. Like if it’s a straight-ahead blues recording, then there’s a sort of sound that’s typical of a drum kit on that kind of recording, so you use something fairly raunchy like a 414 in places, where on a jazz date I might use a 4006 or a Sennheiser condenser. Then there’s the plain old thing of putting a 57 on a guitar amp where it just works, so why reinvent the wheel?

Is your approach similar to the norm when recording an orchestra, with a Decca Tree and house mics?

My approach on an orchestra has never been with a Decca Tree. It started out very much following along in the steps of Jack Renner, who originally hired me at Telarc, and who developed the well-established Telarc sound on an orchestra that the label is known for, so I needed to be able to continue that tradition of the so-called “Telarc Sound.” 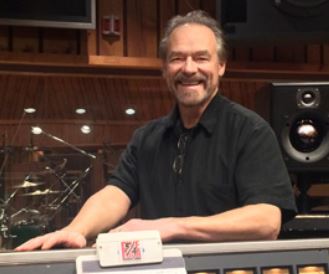 At that time when I first started, Jack was typically recording with 3 omni’s across the front of an orchestra and perhaps two omni’s out in the hall and that was it. I followed along in that tradition until I came up with something of my own to contribute.

I changed it from the 3 omni across the front to 4 omni’s across the front with the two center mics being 24 inches apart, so it was a little like a half of a Decca Tree in the middle, but the positioning was very different.

A Decca Tree typically has that center front M50 (or whatever microphone) well up above the conductor and into the orchestra somewhat. That, to me, presents a sort of a smear when the mics are combined because of the time-delay differences between the front microphone that’s ahead of the other two mics.

These delays destroy some of the imaging and produce a bit of comb filtering to my ears, which is why I never liked the Decca Tree. If you were taking those microphones and just feeding three separate channels it would be OK, but that’s not how it’s used.

So having the microphones in a straight line across the front gave a clearer sound and I could get perfectly good focusing with careful placement of those two center microphones to get good imaging through the middle of the orchestra. That’s one thing that I always look for; the imaging across the orchestra that lets me feel where each musician is on stage. Use of spot mics pretty much destroys that, so I tend to shy away from using them.

Anyway, I quickly moved from that to using a Neumann KU-100 dummy head in the middle as part of the quest for better imaging across the middle. It got in there by accident. I was really just trying it as sort of a surround pickup and experimenting with binaural and one time I got brave and threw it up there in front over the conductor and that became the main stereo pickup on the orchestra with omni outriggers out on the flanks.

What do you do for the hall?

For stereo, I continue to use a couple of omni’s out in the middle point of the hall, but when I started actively doing surround some years ago, that wasn’t satisfactory anymore for the rear channels. They were too far removed in that they got the reverb but the sound was always somewhat disconnected from the front channels.

So early on I brought my surround mics fairly close up to the stage and started to experiment with a number of different setups which I’m still fine-tuning, and I probably forever will because it’s such a difficult thing to capture properly. Often those surround mics are anywhere from 15 to 20 feet out from the edge of the stage depending on the house. They’re not out very far at all.

The most common surround pickup that I’ve been using is two M/S pairs out there, looking forward and back on each side. They would be assigned to Left Front/Left Rear and Right Front/Right Rear as far as the decoding output of the double M/S pair, so I’ll be using a figure 8 and a supercardioid, usually the Sennheiser MKH 30 and MKH 50, which are the easiest ones to use in this case. Often I’ll be using the Sennheiser omni’s as the flanks to the KU-100, although sometimes they’ll be Schoeps depending upon the music and the hall.

Do you start with the same setup every time?

Every session is unique, but there are places that I visit regularly [in an orchestral setting] so I know where to start on those. There are still a lot of things that need to be different given the piece of music that we’re recording.

You can read more from The Recording Engineer’s Handbook and my other books on the excerpt section of bobbyowsinski.com.

Bobby Owsinski is an author, producer, music industry veteran and technical consultant who has written numerous books covering all aspects of audio recording. To read more from Bobby, and to acquire copies of his outstanding books such as The Recording Engineer’s Handbook, be sure to check out his website at www.bobbyowsinski.com.
All Posts
PrevPreviousUniversal Audio Releases Neve Preamp Plugin
NextClair Brothers Provides Signature Sound For China’s First ClubNext
Top Stories
Explore All Study Hall