Autograph provides LINA and LEOPARD arrays with 900-LFC subs for extended run of shows at the 1100-seat Olivier Theatre.

A revival of Stephen Sondheim’s Follies at London’s National Theatre recently wrapped up after an extended run. To ensure dialogue and music were carried to the audience with clarity and impact, the production relied on Meyer Sound‘s LINA and LEOPARD line array loudspeakers – supplied by Autograph of London.

Tasked with balancing subtle transitions between the dramatic and musical elements in Follies was distinguished sound designer Paul Groothuis, who has credits on more than 120 productions at the National Theatre alone. Assisting in system design and specification was his associate, Alex Caplen, who also serves as sound & video supervisor for the 1100-seat Olivier Theatre, the specific stage (the National Theatre has three) hosting the production.

Follies marked the first pairing for LEOPARD and LINA in UK theatre, and Groothuis quickly found it an ideal combination. “I was flattered to be among the first to use the LINAs,” he says, “and they turned out to be remarkable loudspeakers – really extraordinary, right out of the box. I trust Meyer completely in that regard, in that I can put up a system and go into tech without having to change it round first. With some other brands, you have to work quite a bit to make them sound right before you can go into rehearsals.”

Groothuis also was pleased to find that these smallest members of the LEO Family share common characteristics of the similarly sized M’elodie and MINA systems he’d used over the past decade. “What brought me over to Meyer systems was the clarity and the headroom. In earlier days, with less amplification, that wasn’t as critical. But the culture has changed, and with people accepting higher levels it’s important to know the system will retain a natural vocal clarity as the volume goes up. I trust the Meyer boxes to do that.” 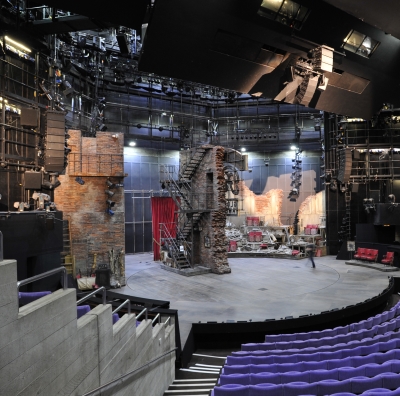 His associate, Alex Caplen, was similarly pleased with the clarity and linearity exhibited by the main arrays, configured here as three LEOPARD over six LINA in the center mono cluster with LEOPARD side arrays of eight each.

“This was my first outing with LINA and LEOPARD and a bit of a leap of faith,” he confesses. “But at first hearing, I was amazed at the power it could deliver in such a small form factor, and the linear response of the system as a whole was staggering. There was something rather satisfying when looking at the flat EQ display from the Galileo [loudspeaker management system]. More than once I did a double take, thinking we’d lost the EQ … but we just didn’t need it.”

“The MSL-2s have a unique character, and for me nothing can replace them,” says Groothuis. “They work incredibly well at maintaining the tonality of the orchestra, but I also blend the orchestra into the main left and right arrays for better clarity and distribution.”

Groothuis also acknowledged the important role of Autograph as a collaborator in the system installation and tuning. “Autograph is always my preferred supplier in the UK, my first port of call. They were brilliant here, as they always are.”

Taking the helm for Autograph on the project was Chris Austin, who shared the enthusiasm for the small LEO Family loudspeakers. “LEOPARD and LINA work well together as they seem to have come out of the same mold. What really stood out for me was how little we had to do to get them ready. I know that’s what Native Mode is supposed to do, but it wasn’t just ‘usable’ or ‘alright.’ It was fantastic right out of the box. I know quiet time is precious in tech week and getting a head start like that almost felt like cheating.”

Also contributing to the sound success of Follies were the full audio staff of the National Theatre under the direction of head of Sound & Video, Dominic Bilkey, and in particular the sound number 1 for the show, Jonas Roebuck.

The Follies production was directed by Dominic Cooke and was broadcast live to cinemas worldwide as part of the NT Live program. For the middle part of the run, Follies shared the Olivier Theatre stage in repertory with the play St. George and the Dragon, sound design by Chris Shutt. The same proscenium and vocal systems were used for both productions, except the MSL-2 loudspeakers which were removed for the play.