Seven-time Grammy Award winner TobyMac was back on the road this year for the fourth edition of his Hits Deep tour, a perennial winter-into-spring music celebration that circulates through arenas across the United States.

As has been the case from the outset of the Hits Deep series, this year’s edition relied on a Meyer Sound LEO Family system supplied by Blackhawk Audio of White House, Tennessee.

The 2019 outing was the first with Pat Haapanen as TobyMac’s front of house mixer. Haapanen, who had served as Blackhawk’s chief systems tech on prior tour legs, was tapped for the post when prior front of house engineer Ryan Lampa decided to take time off from the road. His past experience gave him full confidence that his mix at front of house would translate throughout the arenas. 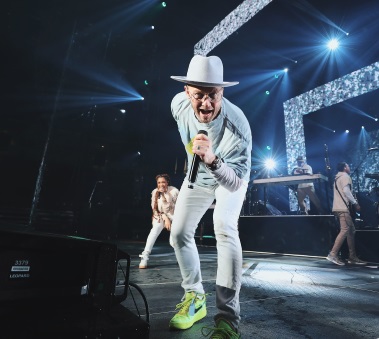 “I love the way everything in the Meyer Sound LEO Family has the same sonic signature,” he says. “You have the different size boxes all blending together so it sounds seamless as you walk around. It’s the same when we are scaling down from big arenas to smaller venues. I know that everybody in the audience will have the same experience everywhere on the tour.”

Haapanen also gives high marks for the system’s ability to handle the range of sounds created by TobyMac and the multiple supporting artists. “The show goes up and down in dynamics, but overall it’s pretty high energy. It’s everything from reggae-style to rock ‘n’ roll, adult contemporary pop, and hip-hop. The linearity and headroom of the line arrays give us overall clarity, and the 1100-LFC subs have all the horsepower we need to drive the hip-hop numbers.”

Anchoring the main system are twin hangs of 12-each LEO-M line array loudspeakers over four LYON-W line array loudspeakers for downfill. Side coverage is from 12-each hangs of LEOPARD line array loudspeakers, with four more LEOPARDs dedicated to front fill. Six 1100-LFC low frequency control elements are flown per side for robust bass, augmented on the ground by eight 900-LFC elements. The artist foldback systems comprise four JM-1P loudspeakers, six 700-HP subwoofers, and two MJF-212A stage monitors. The entire system is under the control of a Galileo master processor and four Galileo Callisto array processors. 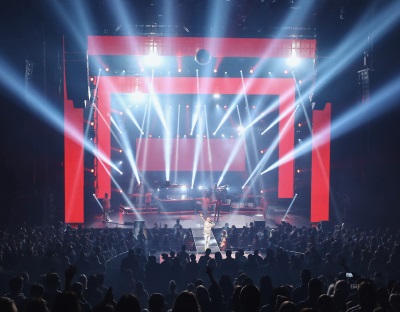 The Meyer Sound LEO Family system has been an integral part of the continuing close relationship between Blackhawk Audio and TobyMac’s organization, according to Blackhawk’s Jamie Nixon.

“Ryan Lampa is mostly off the road but he’s still the production manager and ultimately it’s his choice,” he says. “He was using another company when we first met, but when he first heard our LEO system he was pretty well sold at that point. We’ve been working together ever since.”

For the 2019 version of Hits Deep, TobyMac was accompanied by Jeremy Camp, Jordan Feliz, Ryan Stevenson, We Are Messengers, and Aaron Cole. The tour made 34 stops, kicking off on January 29 in Alexandria, Louisiana and wrapping up on April 7 in Jonesboro, Arkansas.

A founding member of the Christian rap-rock-pop group DC Talk, TobyMac (Toby McKeehan) has since placed 20 solo singles on the Billboard Christian Song charts. He also has achieved notable success as a record producer, songwriter, and author.