Dallas Audio Post has rebuilt its main mix room to enable production of soundtracks in the latest immersive formats, now equipped with 29 Meyer Sound cinema series loudspeakers in a facility that’s among very few that have been certified by Dolby for working with both the theatrical release and home entertainment versions of Atmos.

“Our main mix room is smaller than major Hollywood dub stages, but larger than most facilities dedicated to mixing for the home,” explains Roy Machado, owner and creative director at Dallas Audio Post. “Fortunately, we had a very talented team working with us, and we managed to thread the needle and make it work for both formats. That gives us extraordinary flexibility in meeting the demands around here, where you have to be a jack of all trades. We produce an exceptionally wide variety of content for the broadcast, streaming and theatrical release markets — everything from sporting events, feature films and reality TV to documentaries and corporate videos.”

For this stripped-to-walls renovation, Machado relied on the same companies responsible for the room’s 2013 upgrade to its first Meyer Sound system, at that time for multi-format mixing up to Dolby Surround 7.1. Architect for both projects was Francis Manzella Design, Ltd. with system specification and final tuning on this round entrusted to Miles Rogers of Meyer Sound and Bryan Pennington of Dolby.

“We knew we would stay with Meyer Sound from the get-go,” says Machado. “We loved the sound of the room before, so Meyer was our only choice for the Atmos upgrade.”

Machado cites the power and linearity of the Meyer Sound surround loudspeakers, all of which are self-powered and true bi-amplified systems. “Before Atmos, having full-range surrounds wasn’t that critical,” he says. “But now, with your bass-managed signal set to height and surround, you need to translate the same quality and textures from the front screen channels. And Meyer Sound has achieved that. You can take a sound from the left screen channel and pan it anywhere in the room and it sounds exactly the same, which is almost shocking.”

The room’s Avid S6 console is now augmented with a new MTRX HD audio interface and SPQ speaker processing card. In addition to Dolby Theatrical and Home Theater Atmos, the facility offers 7.1 and 5.1 surround as well as stereo mixing. Video projection in the 16,000 cubic foot room is provided by a Christie HD10K projector.

“All of our clients have been extremely pleased with the results from this room,” says Machado, “and Meyer Sound deserves much of the credit. The fidelity of the product is unmatched, and everything they do — from design services to support — is at the highest level. It is rare to find a company in this industry — and not just audio — that has that level of commitment.”

A sampling of projects mixed in the refurbished room includes the features “Loud Krazy Love” and “The Adventure of A.R.I.: My Robot Friend,” “The Disappearance of the Millbrook Twins” for Oxy, and the series “Trending Fear” and “Strange World” for the Travel Channel.

In addition to studio facilities, Dallas Audio Post also offers a range of creative services, including scoring and sound design. Entertainment and corporate clients include Walt Disney Pictures, DreamWorks, NBC, HBO, AT&T, and Southwest Airlines, among many others. 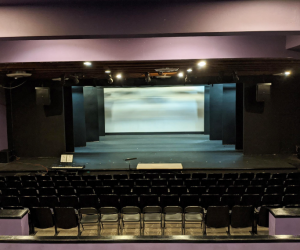