The principal architect behind the system is Daniel Bonneau, senior director of audio production for Bloomfield, Connecticut-based ConCom, the production company that has provided both live AVL and broadcast production services throughout most of UFC’s existence. As the front of house engineer for nearly all UFC events over the past decade — easily more than 300, he surmises — Bonneau looked to step up his game by leveraging the newest generation of Meyer Sound technologies.

“We’d been using a Meyer MICA-based system for nearly seven years and it had done very well,” he says. “But when we made the change to LEOPARD, the sonic quality immediately stepped up to a higher level. We wanted a box that could deliver a huge impact to the crowd when playing walk-in music from the truck, but also had the clarity needed for the interviews afterwards — even when the fighters are exhausted and holding their mics down by their belts. The LEOPARD system accomplishes both, and handily.” 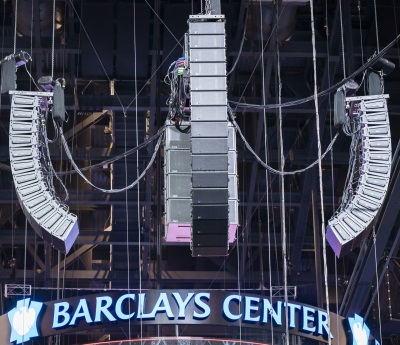 Along with power and clarity, Bonneau also sought a system that could go in and out quickly, scale to arenas of any size with seamless coverage, and hang high out of sight-lines for fans and TV cameras. One key element of his solution was to implement a fiber-optic AVB network for linking front of house to the GALAXY processors for the arrays. But as the arrays had to be flown high above the center scoreboard-mounted video screens, the question arose: Where to best place the array processors?

Bonneau’s unique solution was to build two custom steel pods, one flown on each side of the center scoreboard, and each serving three purposes. The top portion provides storage for the cable looms connected to the three LEOPARD arrays covering each end of the arena; the pod’s side incorporates racks for power distro along with two Luminex AVB network switches and four GALAXY processors; and the bottom provides rigging points that support two different configurations for the 1100-LFC low frequency control elements.

“It’s unbelievable how much quicker things are going now,” reports Bonneau. “We’re saving over an hour on load-in and at least a half-hour on load out. If points are clear, we’re typically floating off the ground in three hours. The way we package the system, the array boxes are rolling on carts of four, with our side hangs twelve deep and end hangs sixteen deep. So it’s click-click-click on three or four carts and you’re done.” 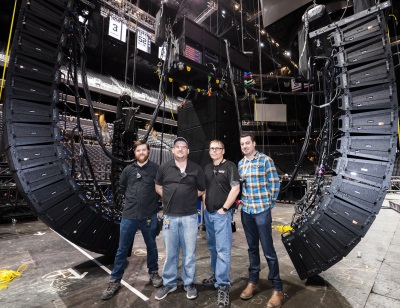 The entire arena seating bowl is covered by the six-hang exploded center cluster of LEOPARD arrays. “With the old system we used eight arrays, but we would get some slapback from the big video screens hung at the 45-degree positions,” says Bonneau. “Now, with the six array configuration we avoid firing at the screens, but the wide horizontal of the LEOPARDs still gives us seamless coverage. Also, I have all the headroom I need to handle walk-in music, which varies greatly from track to track, and I have ample gain before feedback in the post-fight interviews.”

For musical deep bass as well as visceral impact effects, the system also incorporates a total of eight flown 1100-LFC elements along with four 900-LFCs tucked under the Octagon competition platform. Also directly underneath the Octagon mat are five Sennheiser 421 microphones that are routed directly to the 1100-LFC elements. “When a fighter gets picked up and thrown down, it lays your hair back when he hits the mat,” says Bonneau. “The fans may not be consciously aware of the effect but it intensifies the total experience.” 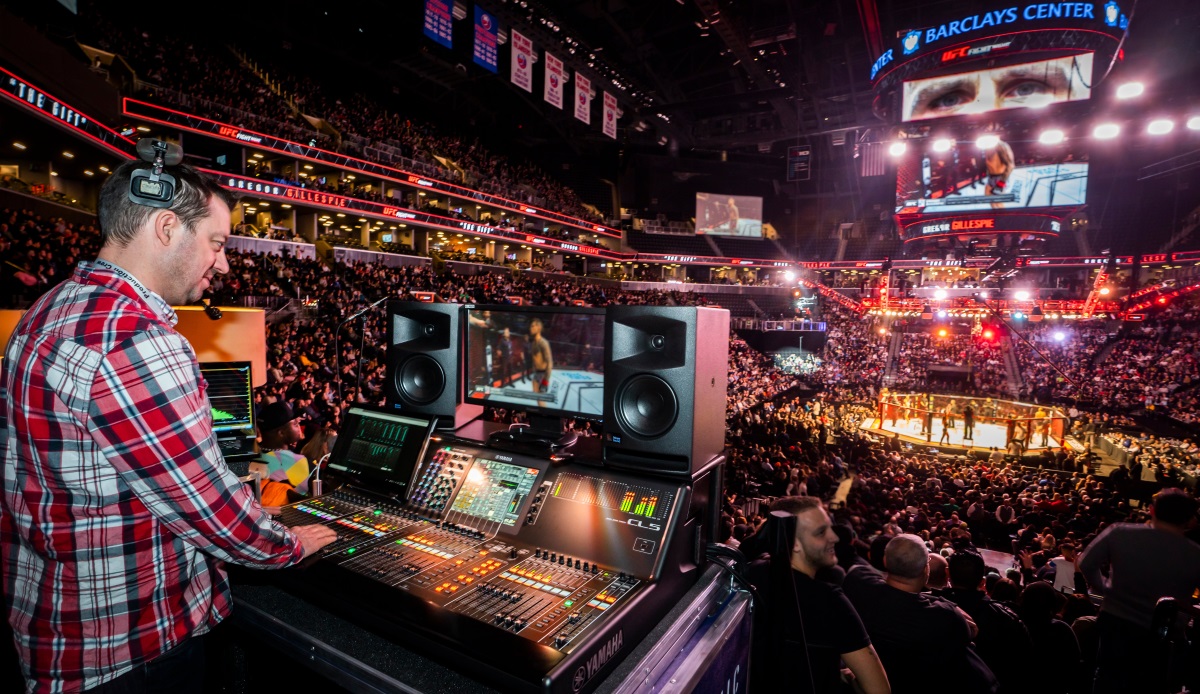 With a flown array trim height typically at 60 to 80 feet, a separate system is required for the floor seats. Eight UPA-1P loudspeakers are mounted to lighting fingers extending out from the signature UFC lighting truss rigged over the Octagon. In addition, eight UPQ-1P loudspeakers are mounted on the main lighting truss. This configuration allows Bonneau to tailor a custom stereo mix for each of the four quadrants, with one high-impact mix for UFC executives seated at the Octagon and a boost in vocal clarity for the press section.

Bonneau is thrilled by the way the system has elevated the experience for fans in attendance despite the limitations of broadcast. “To help the broadcast team we try to avoid showing any loudspeakers in the frame,” he says. “So we’re using these compact Meyer line arrays, little UPQs and UPAs, only eight 1100-LFCs — and we’re just crushing major arenas with them. We have not been able to accomplish this with any other manufacturer’s systems. When we deployed this rig for the first event, we knocked it out of the park.”