To carry the full impact of the hard-rocking foursome — formed by founding members of the group Téléphone — to assembled throngs of 60,000-plus, principal audio provider Dushow deployed the largest system ever configured using Meyer Sound‘s LEO Family line arrays exclusively, with the system comprising a total of 312 loudspeakers.

The sonic performance of the system was readily apparent to the band’s front of house engineer, Bob Coke, an industry veteran also known for his long association with The Black Crowes.

“I have no doubt we set a new benchmark for Stade de France,” states Coke. “For me, the system dialed in very quickly so I could get on with mixing the show. After the first two songs, I started bypassing channel EQs, compressors and gates because it sounded so good uncorrected. Sound was transparent with incredible restitution of the on-stage sources.”

Coke reports his evaluation was supported by others. “I was assailed by positive feedback after the first show, including from musicians I had worked with, touring agents, the opening acts and production director. All agreed it was the best sound they had ever heard in the venue.”

The uniform, linear response characteristic inherent in the LEO Family was foundational to the system’s success, according to Coke. “LEO, LYON and LEOPARD loudspeakers have near-perfect sonic compatibility, and the system design minimized reverberance by shooting sound only to parts of the stadium where the audience was seated. The coherent result assured me that what I’m hearing while mixing is exactly what everyone else is hearing. The LEO Family is also powerful but easy on the ears. It delivers a generous, in-your-face sound at lower SPL levels than any other system I’ve ever worked on.” 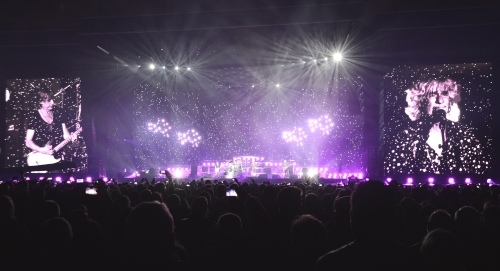 “Their integrity, knowledge and competence are above reproach, and the many compliments I received about the sound I gratefully share with them.”

Optimization and drive were provided by 24 Galileo Callisto 616 array processors. In addition, eight UPJ-1P and six UPQ-1P point-source loudspeakers were supplied as near-field fill systems. Dushow supplied the majority of system components from its own inventory, but also drew on Meyer Sound’s network of LEO Family collaborators to source additional loudspeakers from Skynight (Switzerland), Victory Tour Production (Denmark) and the Bright Group (Norway and Sweden).

For system designer Aymeric Sorriaux, the complete LEO Family solution provided all the tools needed to raise the bar for production sound at Stade de France.

“Everything was predicted with MAPP Online,” he recalls, “and that combined with our knowledge of the LEO Family loudspeakers allowed us to optimize the system and give Bob [Coke] exactly what he was looking for. We also used 11 RMServers for monitoring the performance of each loudspeaker in the entire system to assure consistent results. ‘We have never heard sound like this in Stade de France’ is what I heard from many professionals who know the venue very well.”

The concerts were certainly a high point for Eric Alvergnat, managing director and CEO of Dushow, who had mixed sound for some of Téléphone’s very first concerts 40 years ago.

“It was an incredible job,” he says, “from an A+ team led by Bob and Aymeric. The sound really was better than ever before in this venue, because we took the time we needed and we had the budget, the expertise and the LEO Family technology. We also made sure that everybody in the audience was not too far from a loudspeaker. If you add a great audio mix to that, then WYDIWYG — what you dreamed is what you get.”

The Stade de France shows capped Les Insus’s summer-long tour of European music festivals. In 2016, Les Insus headlined its own European arena tour accompanied by a LEO Family reinforcement system also supplied by Dushow. The rock group Téléphone first formed in 1976 and was often referred to as ‘the Rolling Stones of France.’ The group broke up in 1986 but three of the original foursome later reformed as Les Insus, with the name change legally imposed by the departing member.