Often, the best place to start in terms of improvement is at the source; in other words, the microphones capturing the performance must be of quality, or the rest, literally, is just noise

Times are tight. The last thing most of us want to do right now is spend scarce church funds on new audio equipment.

The solution, however, lies not in completely shutting the door, but in setting clear priorities, choosing carefully, and investing wisely. In doing a complete inventory of what we have that works well, works OK, and works horribly to the point of seriously compromising our primary goal of the Word being heard.

Because right now, as we grapple with life’s rougher seas, hearing the Word is paramount.

With that in mind, I have a recommendation for any of you who might be in serious need of a new wireless microphone system, or are looking for a worthwhile upgrade.

A couple of months ago, Audio-Technica sent me a 4000 Series Artist Elite wireless microphone system, both for evaluation in terms of my “day job” as a systems integrator and also to take for a test-drive at my church, where I serve on the technical team in support of both contemporary and traditional worship services.

While the 4000 Series was introduced over five years ago, it’s still formidable in every aspect, including my two primary factors: sound quality and rock-solid RF performance. If it doesn’t sound good, forget it. If it’s plagued by drop-outs and other anomalies, double forget it.

In fact, it better make a difference. 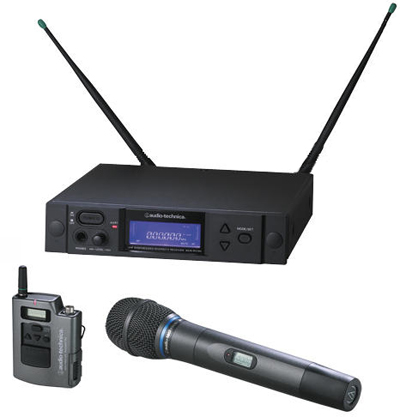 The Audio-Technica AEW-4313 system that Gary evaluated. (click to enlarge)

What I found in my experience with the 4000 Series is that it does indeed make a difference, both in terms of vocal sound quality as well as making life easier for system operators. Here’s why.

Note that the operating frequency range completely avoids the troublesome 700 MHz band that’s the subject of so much uncertainty now, and likely, in the future. (You can read A-T’s latest statement on the 700 MHz issue here.)

Additionally I was provided with an AT892 MicroSet omnidirectional condenser headworn microphone. The company offers nine different transmitter options for the R4100 receiver, accounting for the price range quoted above. 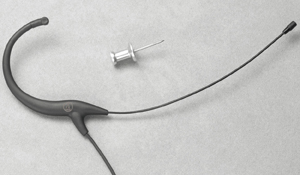 Right out of the box, I liked what I saw. First, and albeit it’s a small thing, the receiver unit comes with a standard “computer style” power cord – NO wall wart or bulky inline converter in the cord.

Too many times I’ve had to search for a power cable for a receiver that of course has a voltage and current requirement that is not common, in addition to having to figure out if the connector on the power supply is tip “+” or “-“.

Beyond the power cord, the initial impression was great – everything is included to rack mount (dual or single) or set on a counter. Also in the package is a link cable to connect multiple units together to use the IntelliScan feature that automatically determines and sets the best available frequencies on all linked receivers.