Originally staged in Regent’s Park Open Air Theatre in London for what turned out to be a sold-out run, the production had to be completely reimagined for the Lyric Opera House a venerable, high-ceilinged space with its own set of challenges.

Asked about the production, OSA’s Peter Wiejaczka explains, “We’ve developed a relationship with the Lyric as a consultant based on a successful replacement of their speech systems with Martin Audio CDD. The sound designer for ‘Jesus Christ Superstar,’ Nick Lidster from Autograph in London, and other members of the original production team were brought in to match the phenomenal results achieved in Regent’s Park. Lidster contacted Martin Audio’s Nigel Meddemmen to assist with the design for the Lyric Opera House using MLA Compact.” 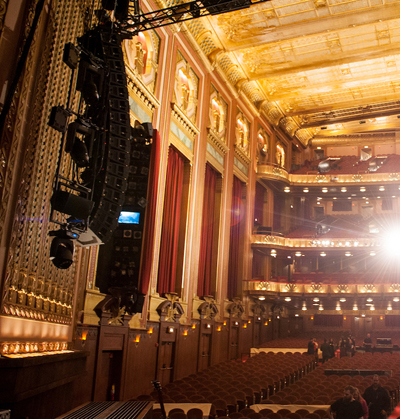 The system includes 16 MLA Compact enclosures per side arrayed lower than usual—in order, as Meddemmen points out, “to ensure we could reach right under all three balconies and avoid using the house under balcony fills. Nick specifically didn’t want to use the house system as it wouldn’t match the tonality of the MLA Compact. This worked perfectly as there was excellent coverage to the back of every balcony.”

Given the low rigging height, the MLA Compact had to be flown low out in front of the proscenium to avoid blocking sight lines, which makes them very visible to audiences, a deliberate move in this case to reinforce the original concept of Rock Opera.

In addition to the mains there are 16 CDD-LIVE loudspeakers mounted in the wings and all over the stage to ensure the monitoring for the large cast provided even coverage across the stage,” adds Wiejaczka, “with a center array of six Wavefront Precision Mini flown to provide center downfill, combined with a further eight WPM mounted into the stage apron for front fills to ensure even horizontal coverage across the width of the proscenium.”

Explaining his relationship with Martin Audio and experience with MLA, Lidster says, “As in Regent Park, I wanted very accurate control of the audio energy reaching the auditorium seating and to minimize the sound either spilling or reflecting off the walls. So, I chose the Martin Audio MLA loudspeaker system that was first developed for large outdoor festivals in the UK where multiple stages are right next door to each other, and they want the spill from each area and offsite to be minimal.

“When it came to the Lyric Opera,” Lidster continues, “An opera house acoustic is designed to aid the unamplified voice, and they usually resonate nicely in the vocal range. Of course, this is unhelpful for amplified musical theater or rock shows, where you want a neutral room acoustic and short reverb time for maximum intelligibility. 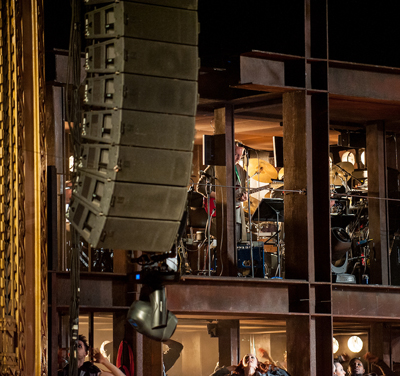 “I could see, when I walked into the auditorium, that there were vast flat walls and plaster surfaces everywhere, it was clear that to be successful, I needed a way to avoid the architecture as much as possible.

“The MLA’s control software and steering capabilities mean that you can keep the energy away from the roof and walls and focus the sound into individual seating areas.

“I’ve used Martin Audio’s technology to maximize sound pressure at the seat and to remove as much of the reverb and reflection from the room as I can. That’s not to say it has gone altogether, but hopefully the direct sound from the loudspeakers overpowers that room acoustic before it becomes a significant factor.

“MLA is a really impressive system and the various elements have all integrated really well on this project, so I’m very pleased. The support from Nigel at Martin Audio and Peter from OSA has helped make for an enjoyable and successful production

Summing up, Wiejaczka adds, “As far as the Lyric Opera staff is concerned, they thought It was the best sounding shows they’ve ever had in the theater. For Nick, it was very consistent with the way the production sounded in Regent Park. He was very happy and has a lot of confidence in Martin Audio.”