The “90’s Pop Tour” concert in Mexico City’s City Arena gathered together OV7, Kabah, Magneto, JNS, Mercurio, Calo, and The Sacados. The show has been seen by more than 1.5 million people in less than 2 years, making it one of the top attractions in Mexico, the US and other countries in Latin America.

Featuring individual and group performances where the artists interacted with each other, the presentation was on a special 360-degree stage designed to make the artists an integral part of the audience experience. To guarantee the audio quality for a concert in the round playing to an audience of over 25,000, Mexico’s Producciones Lemus supplied a sound system based on Martin Audio MLA.

The actual PA was comprised of eight strategically deployed hangs with 11 MLA and one MLD each, plus six delay hangs of four MLA Compact and eight stacks with three MLA Compact each for front fills and 24 ground-stacked MLX subs. The PA was complemented by a lighting system that included 450 lamps and a 500 foot LED screen. 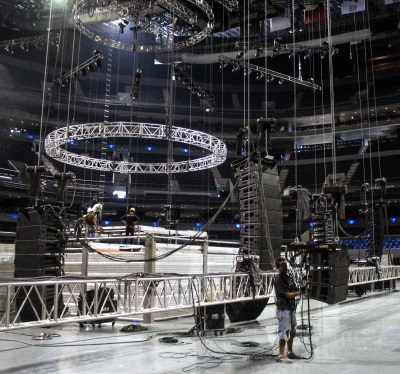 Commenting on the production, Oscar Tovar, 90’s Pop Tour audio director and monitor engineer says, “The most important challenge was getting 30 main voices to reproduce with more power and clarity against the musical instruments. The format of the show was 360-degree audio on an asymmetrically sized stage, which wasn’t easy but with MLA, the design we got from Martin Audio UK, and the Display 2.3 software, we were able to achieve it without any problems.”

90’s Pop Tour front of house engineer Luis “El valedor” Román adds, “The definition and power delivered by the MLA system is incredible. I’m obsessed with the high and mid frequencies due to the fact that it is the critical area where the front of house engineer defines and give space to the mix. With MLA, the voices were clear with great definition, so the articulation of the musical instruments was increased in terms of the stereo sound with a very spacious and open sounding mix.” 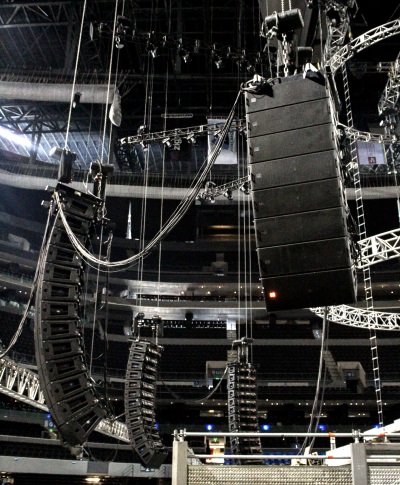 Commenting on the production, Berenice Gutierrez director of Pro Active Latin America, Martin Audio’s regional distributor, adds, “It’s been really important to support our key partners in the LATAM territory working on this show, not only because of its complexity but also the iconic bands that were performing.

“We achieved a very high level of production and I would like to thank and congratulate the team that included Charly García, Luis Román, Sonia Salvador, Producciones Lemus, Oscar Tovar and the LATAM crew for the great quality of services provided and we look forward to adding more productions, venues, sound engineers and shows to Martin Audio Family worldwide.”