G4 wireless system and AMBEO VR mic utilized to create 360 degree listening soundscapes on latest video for ‘In The Studio With’ series.

Late last month Man Made Music hosted the latest installment of its ‘In The Studio With’ series featuring electronic music composer Bayonne (a.k.a. Roger Sellers. The Austin, TX-based songwriter unveiled his second album Drastic Measures to a select audience of VIPs and tastemakers in this unique performance.

The performance saw Bayonne using various synthesizers, electronic instruments and looping devices to perform the new album in its entirety. Instead of using a traditional PA system for the performance, Man Made Music partnered with Sennheiser to provide each of the 30 listeners in attendance with HD1 headphones coupled with EK IEM G4 receivers, which played back a live mix of the performance through a single Sennheiser SR IEM G4 transmitter. 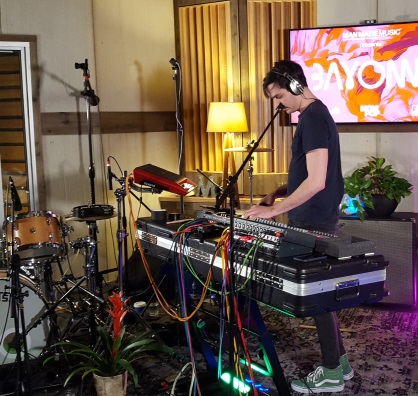 The headphone mix also incorporated live audio from a Sennheiser AMBEO VR mic, which served as a room mic to capture 360-degree, ambisonic audio. This added a sense of space to each listener’s binaural audio signal — and an immersive element to the resulting recording and video which was streamed and premiered on YouTube and Facebook.

Bayonne’s live performance was played back to the audience latency free across the Sennheiser G4 Wireless system after hitting the mixing console. Working with Sennheiser’s Customer Development application engineer Greg Simon who assisted with integration and microphone selection, Man Made Music Studio technologist, Darren Moore and chief engineer, Dennis Wall mixed a combination of electronic and acoustic sounds — including a full drum kit — before creating a stereo mix to send to the audience headphones.

For Man Made Music’s ‘In The Studio With’ series featuring Bayonne, audience members were provided with Sennheiser EK IEM G4 receivers coupled with HD1 headphones. Audio was fed to each receiver through a single SR IEM G4 transmitter.

For Man Made Music’s ‘In The Studio With’ series featuring Bayonne, audience members were provided with Sennheiser EK IEM G4 receivers coupled with HD1 headphones. Audio was fed to each receiver through a single SR IEM G4 transmitter.

The AMBEO VR mic played an essential role in achieving a fully-immersive auditory experience for listeners, capturing a full 360 degrees of sound during the performance. With the help of the included AMBEO A-B Converter plugin on the Digital Audio Workstation (DAW), the result was a compelling binaural broadcast feed that captured the spatial qualities of the live performance environment.

For Man Made Music, putting on intimate artist showcases is nothing new, but Moore says the wireless concept for the Bayonne event is what prompted him to bring Sennheiser into the fold. “When I heard the idea about plugging 30 people in a room for the Bayonne performance and thought about how to pull it off, I said, ‘Let me call Sennheiser and see if they can provide any guidance.’”

He proceeded to contact Sennheiser’s David Missall, manager of customer development and application engineering, who asked if they had considered doing a surround sound recording. Moore perked up at the suggestion.

“The G4 system and HD1 headphones — combined with the VR Mic — were a game changer for us because you could move around during the performance and feel the music and not feel confined to one space. It suddenly felt like there was air around you, and it was a very cool feeling.” Hutchinson adds.

Once the live mix and resulting recording were completed, the team knew they had a special piece of content to share with fans. The resulting video captures not only the intimacy of the performance but also the very essence of the room.

“This helped us capture a moment in time with Bayonne that was relevant when it happened but will be also be relevant for fans at any point in the future. Even if folks weren’t able to attend in person, the video and recording makes you feel like you were there.”

On the eve of #DrasticMeasures release, I performed the new album live in full for a small group of attendees at Man Made Music's recording studio in NYC. In making one of my all-time dreams come true, the audience experienced the full performance through Sennheiser wireless headphones…making it the true “Bayonne experience” Infinite thanks to Sennheiser, Man Made Music, Mom + Pop Music for helping make this one-of-a-kind event possible.