Bridge & Parallel
Audio professionals have long made heavy use of the bridge mode, which is simply driving one channel out of phase with respect to a second channel, then taking the output from the positive terminals of both channels.

While one signal from one channel goes in a positive direction, the other channel moves in a negative direction.

Effectively, the load sees twice the output voltage that it would normally see. In the case of a 100-watt into 8-ohm amplifier, bridging delivers 56.56 volts into the load. Theoretically speaking, the amp could now deliver a whopping 400 watts into an 8-ohm load.

Putting two output channels in parallel can also provide double the available current, much akin to the way bridging doubles the available voltage. This would mean a 100-watt amp with a 3.53-amp limitation would now be able to deliver the 7 amps needed to drive that 4-ohm load.

So it begs the question: why are amps with the ability to parallel outputs not in broad use today? The simple answer is that paralleling channels is more difficult than it appears – much more difficult than bridging. Unless very careful measures are followed, each channel will not share current equally, and thus there is no real benefit.

We conceived of a method of combining output channels that allows for standard bridging with the benefit of the doubling of output voltage and allows paralleling with near perfect current sharing with no loss of fidelity.

Instead of being limited to a pair of channels, that paradigm has been extended to include multi-channel amplifiers, meaning that two, three or four channels can be placed in parallel. In these parallel modes, the full available output power can be delivered to a single low impedance load, even down to 1 ohm.

Moreover, the high impedance performance has been extended by offering a bridge/parallel combination. With a 4-channel amplifier, two pairs of channels can be independently paralleled, and then this combination is bridged to provide double the voltage and current. The result is full power that can be delivered into an 8-ohm load.

Clearing Hurdles
In order to create FAST, we had to overcome three significant technical hurdles. The first was to create a repeatable and well-behaved output stage. With low-power amplifiers, it’s fairly easy to do this, but available components did not meet our specifications.

As a result, we worked directly with semiconductor labs to create a custom power MOSFET that could handle the voltage and current needed, along with specific qualities that make the device more suitable for audio. 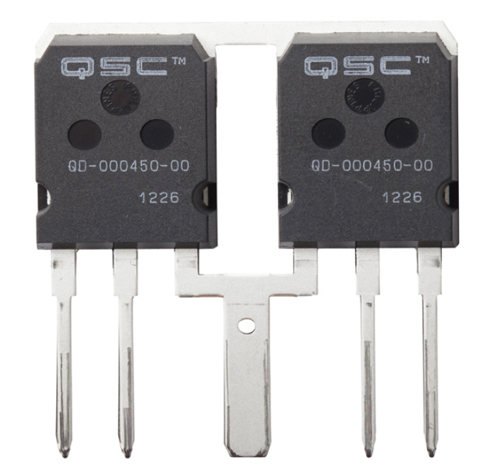 This MOSFET was then matched with a pair of high-speed, low-loss current steering diodes and bonded together on a common substrate. Finally, that assembly of was paired with a duplicate set and mounted into a high-temperature package, creating a “power module” that can deliver 1,250 watts to a loudspeaker load.

The second hurdle was finding a way to insure that paralleled channels would share the output current equally. Getting channels to share current requires that each power stage receives the exact same drive signal.

As mentioned earlier, the final section of a typical class D output section is the output filter. This filter averages the pulse width modulated wave form and re-creates the audio input signal while also providing a blocking path for high-frequency currents. If one output section tries to switch before another output section, the filter will prevent any current flow between the sections, as long as the amount of time that the sections differ remains very short compared to the time constant of the filter.

By controlling the drive linking signal to insure power modules turn on or off within about 60 nanoseconds of each other, the filters will block any errant current that would have otherwise flowed. Carefully regulating the timing of these signals means that all of the power modules are switching at exactly the same time – and since each module is effectively identical, the same amount of current is delivered to the load by each channel.