With his roots in Italian opera, Alfie Boe has mastered a range of vocal stylings that encompass classic Broadway musicals, vintage pop, soul and country.

On the recent UK tour in support of his latest release, “As Time Goes By,” the critical task of reinforcing Boe’s voice was assigned to a Meyer Sound LEOPARD line array system supplied by Salisbury-based Major Tom.

Front of house engineer for the sold-out tour was Mark “Joey” Jowitt, who also served in the same capacity for earlier “Ball and Boe” arena tours Michael Ball. Although most prior tours also carried Meyer Sound systems from Major Tom, this was Jowitt’s first outing with LEOPARD loudspeakers as the main arrays.

“The most important thing about working with acts like Alfie and Michael Ball is realizing the highest vocal intelligibility,” says Jowitt. “That is critically important. And the Meyer LEO Family boxes are brilliant in that respect across the board. It’s the best vocal sound I’ve heard out of a PA, and that’s the main reason we use it.” 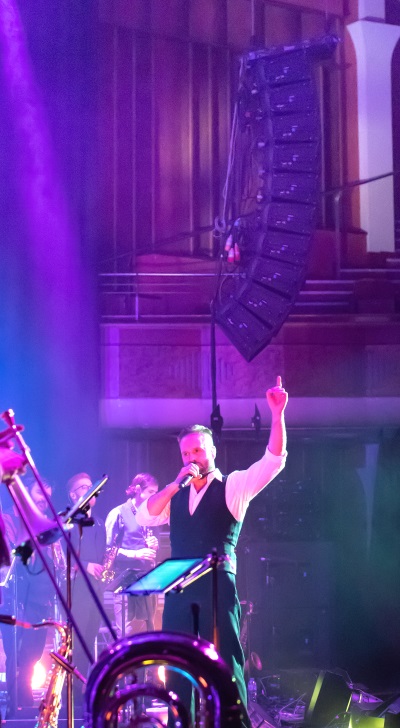 As for the choice of LEOPARD on this tour, according to Jowitt, it was simply a matter of sizing the system for the venues — in this case larger theatres and concert halls with seating in the 2,000 to 5,000 range.

“We’ve found that LEOPARD scales down seamlessly from the larger LEO and LYON systems. On this tour it was not a high SPL gig, but we wanted the same quality of sound. The size of LEOPARD, for the configurations we use, is perfect. We carry thirty boxes, and we can fly them all or we can ground stack as needed to get underneath balconies. The coverage is linear throughout the venue.”

Prior experience with both the products and provider made his audio production decision a no-brainer, says Jowitt. “The LEO Family boxes are a major step forward, as are the new GALAXY controllers. They work extremely well, and the systems techs just love them.”

For Major Tom project manager Andy Banks, the LEOPARD line arrays have proven extremely popular as both main systems and as fill systems for arena-size LEO Family configurations. “As soon as the LEOPARD loudspeakers came off Alfie’s tour, most of them went right back out again — with Michael Ball, playing many of the same venues. We’ve also used them for a corporate gala with Sir Tom Jones, and they are popular on the sub-rental market for events such as the UFC mixed martial arts contests.”

Front of house console for the tour was a DiGiCo SD10, with an SD7 at monitors. Radio microphones were Shure UHF-R with DPA d:facto capsules. Boe and his band used Sennheiser 2000 Series IEMs while the opening act relied on Meyer Sound UM-1P stage monitors.

Though he started his career in opera, Boe was best known for his musical theatre roles, in particular Jean Valjean in the musical Les Misérables and as the lead in Baz Luhrmann’s 2002 revival of La Bohème. Two of Boe’s solo albums have certified Platinum status in the UK, while his pairing with Michael Ball resulted in two double Platinum releases, Together and Together Again.