The Luna Cinema operation has been an enthusiastic user of NEXO audio systems since 2015, purchasing a sizeable inventory of GEO M6 compact line arrays for use with the screens that tour some of the most historic and picturesque venues in the UK, from Westminster Abbey to Chatsworth House. This summer, Luna’s technical director Jamie Plummer and production manager Tom Barton chose NEXO’s new GEO M10 mid-size array system, with its dedicated sub bass cabinets, specifically to service the 6-week Luna Beach Cinema event.

“We’ve had a very successful run with NEXO and their line arrays,” explains Barton, “so we wanted to stay with the brand. Jamie and I took a trip to NEXO HQ in Paris, where it was really helpful to hear the new M10 side-by-side with the GEO M6, which we know so well. Adding the larger line array models gives breadth and depth to our inventory, and they are the perfect complement to our new highest-definition LED video screen.”

This latest investment in NEXO sound reinforcement includes 12x GEO M10 line array modules and 8x MSUB15 sub bass cabinets, together with three of NEXO’s brand-new NXAMP4x2 amplifiers. All equipment has been supplied by Orbital Sound, one of NEXO’s main dealers in the UK. 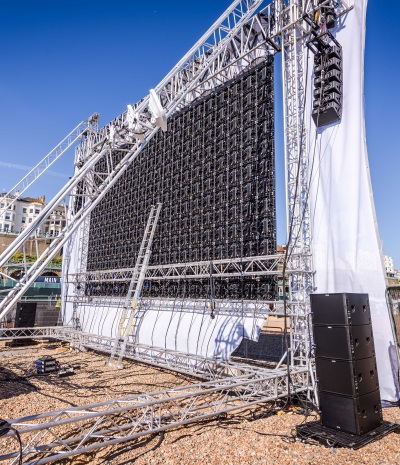 “The GEO M10 is particularly versatile, allowing us the choice of groundstacking or flying systems,” continues Barton. “Flexibility is a priority for us: how the system travels, how it packs down. Set-up of M10 is so easy, we can carry six modules in a flightcase, and just pick them up onto the line array towers. This is important as we rarely have much time to soundcheck – anything that saves us time is a bonus. Many of our sites are noise-sensitive, and the GEO M10, with its cardioid subs, allows us to manage the LF and avoid complaints from the neighbours.”

The Luna Cinema is one of the first touring users in the UK to embrace NEXO’s new NXAMP4x2 controller-amplifier, with its touchscreen control panel. “That touchscreen is a great addition. There are three NXAMP4x2s running the M10 system; we have control of everything on the touchscreen and its operation is fully intuitive.” Luna’s stock of amplifiers, racked and patched by Orbital Sound, are fully compatible with both GEO M10 and M6 sound systems.

Using 8-way Yamaha R Series I/O racks and a Yamaha QL1 digital mixer, “with everything talking to everything else,” the system is run on a Dante protocol network.

The ProLights screen, bracketed by GEO M10 loudspeaker arrays, made its debut in Kensington Palace Gardens, relaying the coverage of the Royal Wedding to the London crowds. After six weeks of film, football and the Wimbledon tennis championships on Brighton Beach, it takes to the road for a tour around the UK called Luna Kids, showing three films a day in outdoor venues.