Lowering The Boom (Literally): Keeping Bass Energy Under Control As Part Of A Semi-Silent Stage

A look into the physics of low-frequency sound and why it’s so hard to control.

On To The Stage

What does this all mean when we’re pursuing a semi-silent stage? We must understand the unique properties of bass frequencies in order to control them.

However, one thing we won’t do here is go into the physics of specialized cardioid subwoofer arrays for stage bass amps since nobody makes one (that I know of), plus the complexity would be a bit much for most basic stages.

(But look for a future article on this one topic since I have a few ideas on how to make it happen.)

So here’s the first myth about bass that I’d like to dispel. Often, bass players standing on stage tell me that they can’t hear their bass, yet all the while, it’s booming in the room. If they step out in the room they agree there’s too much bass, but where they’re standing on stage there’s definitely a big null.

Over the years, I’ve heard numerous engineers and musicians say that bass frequencies don’t develop until they’re out far in the room. What? They’re saying we can’t hear a 30-foot wavelength note until we’re standing at least 30 feet away from the stage/bass cabinet? That’s just a bunch of misinformation.

While it’s indeed true there’s a big difference in the bass from where they’re standing on stage compared to being out in the room, the reasoning is completely wrong. If it took 30 feet to develop a bass frequency, then we’d hear no bass in headphones or car stereos.

The bass energy from the omnidirectional speaker cabinet is not only moving in the player’s direction on stage, it’s also going directly backwards and bouncing off the back wall. Once it returns from the bounce, it’s now 180 degrees out of phase with the front wave.

There’s a simpler explanation that’s obvious once you think about it. It’s really due to cancellation from the back wall behind the bass cabinet. Just like raising a guitar speaker cabinet a few feet above the floor will cancel a lot of bass, likewise placing a bass guitar cabinet seven feet from the back will put the bass player in a quarter-wavelength cancellation node at 40 Hz (Figure 3).

As we all should know from accidentally hooking up low-frequency loudspeakers with flipped polarity, that cancels just about everything “bass.” Out in the room there’s enough other bass reflections to even out the cancellation nodes, so we hear full bass. But standing up on stage right in front of the bass cabinet is the worst place to be.

How to fix it? Just move the bass cabinet back against the rear wall and the cancellation problem will be corrected, plus the bass level will actually increase a little since the energy is radiating into a quarter-sphere instead of a hemisphere. Ain’t physics grand? 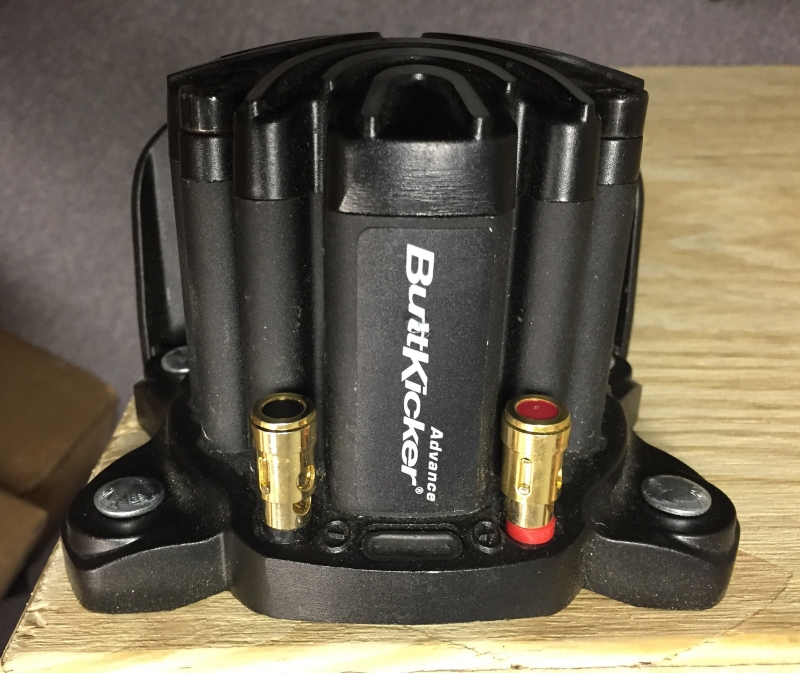 Tactile Transducers To The Rescue

Another solution is to eliminate much of the open-air bass energy in the first place but still direct it into the musicians’ bodies. I’ve been experimenting with ButtKicker transducers, specifically a pair of their BK4-4 Advance models that are rated at 400 watts each (Figure 4), in this quest.

I built a platform to go with it, made of 3/4-inch plywood and rubber isolation feet supplied by Guitammer (Figure 5).

Second, if the gain on the amp powering the transducers is set high enough to be felt at lower playing volumes, when slapping a string on the bass guitar it will try to launch the player off the platform. So I also inserted a 4:1 compressor into the signal path to even out the levels to the ButtKickers. (I have an Alesis Nano Compressor laying around and it’s perfect for this application.)

However, to make this work well, it requires more than just plugging a ButtKicker transducer into a power amplifier. First, it seems to work best with a 100 Hz low-pass filter. While the transducer is rated for up to 200 Hz frequency response, that seems a little too high while playing, so I’ve used a standard 100 Hz subwoofer crossover in a Crown CE4000 amp.

So there’s a traditional Fender Bass head driving a pair of 10-inch speakers for the mids and highs, while the ButtKicker is providing low-frequency energy to the musician through his feet rather than the air. What this creates is a “private bass space” for the musician without blasting the room (Figure 6). 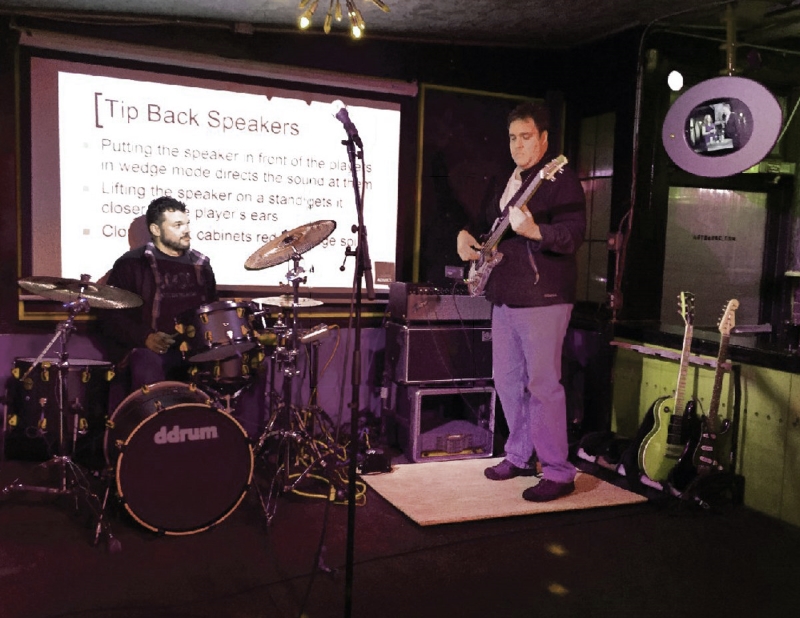 So can you ditch bass amps entirely? Yes. But there needs to be some proper processing to make it work. Tech21 sent me its latest SansAmp Bass Fly Rig to try with this setup, and it sounds great as the front end of the tactile semi-silent bass guitar rig.

To further enhance it, I also added a Galaxy Audio AS-1800 wireless in-ear monitoring system for the bass player. Thus the floor plate supplies the “boom” frequencies while the IEM provides the mids and highs.

I’ll have more on this technology in the next installment, where we’ll also look at a number of small bass amps and loudspeakers that fit will in our ongoing effort to quiet the stage.