Loudspeaker Design Trends: The Latest In A Constant Cycle Of Innovation

Easily one of the most important parts of the sound system signal chain is the loudspeaker. It’s the component that not only converts the electronic signal back to sound waves, but also interacts with the room.

Despite the unyielding laws of physics and other practical limitations, we see a steady stream of new developments that get us closer to the “ideal” in addition to presenting new options. Let’s take a look at some of the current trends in full-range loudspeaker design and development.

This is certainly not a definitive list, which could fill an entire issue, but rather is a look at some of the interesting things that have caught my eye of late.

In The Box
Among the many aspects of loudspeaker design, JBL Professional remains consistently focused on refining and upgrading drivers, as evidenced by Differential Drive. Instead of using a single voice coil in a single magnetic gap, it makes use of a pair of in-line voice coils in separate magnetic gaps, resulting in a lighter, more efficient design that also offers improved removal of heat from the motor structure.

A recent culmination of this focus is the D2 dual-diaphragm, dual-voice-coil driver found in the VTX Series V25 line array, which provides higher power handling with lower distortion, coupled with extended HF reproduction and a smoother response. These benefits in performance are attained from a unit that’s the same footprint as traditional drivers, and at a weight reduction. 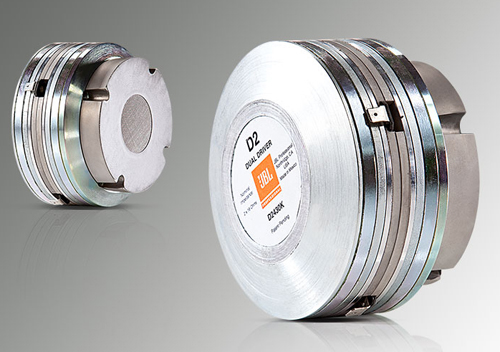 VUE Audiotechnik has focused on the use of beryllium, a strong but lightweight metal, in the diaphragms of it’s compression drivers. As a diaphragm material, beryllium has a high stiffness-to-mass ratio, exceeding that of aluminum and titanium. Because the metal is light and stiff, it can maintain structural integrity at high power levels and can be less prone to breakups. The use of beryllium foil, as opposed to the older vapor deposit way of building a diaphragm, results in a stronger and more uniform product. The latest release from VUE containing beryllium drivers is the al-4 compact line array.

Alcons Audio has taken a different route, favoring ribbon technology in its drivers, and applied correctly it can be advantageous, as seen throughout the company’s product range, including L-series line arrays. The lower mass of the diaphragm in a ribbon design can result in improved transient response, as well as lower total harmonic distortion in comparison to cone compression drivers.

RCF has developed what it calls “Impedance Control Coil” technology for midrange transducers, including those found in the TT + line array series. A secondary coil wound on the speaker yoke and driven in opposite phase to the primary coil effectively cancels the primary coil inductance, increasing sensitivity and reducing distortion. A primary effect is the improvement of the temporal behavior of the transducer, upgrading the crossover transition from the midrange to the compression drivers. 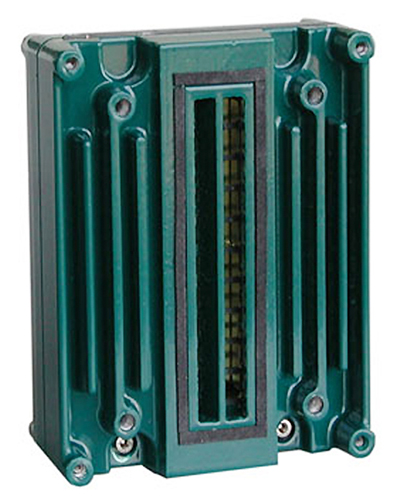 As seen in the new AcousticPerformance line, QSC Audio has developed a design called DMT (short for Directivity Matched Transition). Essentially, DMT combines a compression driver with a woofer, matching the compression driver to the natural coverage angle of the woofer in the crossover region. It helps improve accuracy, coherence and flattens power response. Combined with an axisymmetric waveguide, the result is more consistent coverage both on- and off-axis.

Mackie recently debuted an interesting approach it calls TruSource, a coaxial unit with a compression driver mounted to a woofer, both using a common magnet. Found in the new DLM Series of loudspeakers, the result is a very compact and lightweight package that delivers surprising output power with coherence, further enhanced by 2,000 watts of onboard amplifier power and matched DSP. By the way, I’ll be checking out a pair of DLM8 loudspeakers in an upcoming Road Test review.

At the Winter NAMM show last January, PreSonus unveiled a collaboration with loudspeaker designer Dave Gunness of Fulcrum Acoustic (also noted for his work with EAW and Electro-Voice) in the new StudioLive AI Series of loudspeakers. They offer a coaxial design that combines a midrange transducer with a titanium-dome compression driver on a wide-dispersion horn. AI boxes also include a woofer and considerable onboard DSP, which is paired with Fulcrum’s TQ Temporal Equalization algorithms that manage horn reflection and provide linear time and amplitude anomalies correction, along with performance contouring. 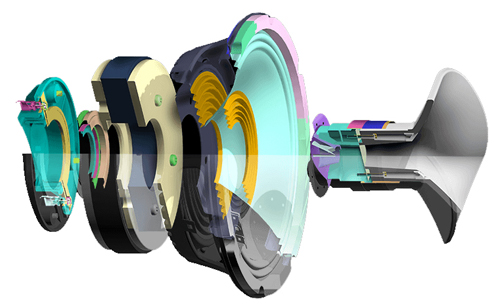 Graphic rendering of the coaxial design in the new PreSonus AI loudspeakers. (click to enlarge)

Tannoy has long been known for its Dual Concentric design, a unique take on coaxial design that merges HF and LF drive units to produce an signature that’s high on coherence and very low on distortion. The company has taken that approach further in the new VQ Series, which combines Dual Concentric and a new, proprietary PSW (Point Source Waveguide).

The design aligns the acoustical centers of the transducers, providing a single coherent wavefront emanating from the throat. The waveguide fosters a balance of well-controlled coverage, smooth frequency response, and natural sound character.