The evolution of large-scale sound system optimization, in the first of a multi-part series

We live in the present and plan for the future. Every once in a while it can be interesting to look back at our history and see he we got here. This puts things in perspective and helps us see what’s coming.

The essential challenges to tuning a sound reinforcement system, a process we now call optimization, haven’t changed in 40 years, and neither have the laws of physics.

But the tools and techniques of the trade have changed dramatically, albeit incrementally, over time. As a person who has been in professional audio for 40 years, here’s my perspective of how it was and the journey to the present.

Let’s take a walk to front of house and meet our modern sound system. We see an engineered loudspeaker system and a multichannel digital signal processor loaded with all types of filters, delays, and more (maybe too much more). There’s an acoustical analyzer ready to guide the optimization process and an experienced operator with a step-by-step plan for system tuning.

Not too long in the past, none of these things would be found there. Just 35 years ago we would likely find a collection of various custom loudspeaker cabinets built in the rental company’s shop. The extent of the “signal processing” would be an analog crossover with fixed filter slopes and a graphic equalizer.

At best we would find a primitive analyzer that no one trusted and little, if any, methodology or scientific process.  All these aspects of our sound system have evolved in the period since, each in their own way and together as a whole.

I’ve been an eyewitness to the evolution of these tools and techniques into their present mainstream forms, as were countless other engineers. We can explore this history together by following five primary threads: the evolution of loudspeaker systems, signal processing, acoustical analyzers, analysis systems, and the methodology of optimization.

This is a personal perspective, not an authoritative history (which would be an entire book in itself). Every veteran of the pro audio industry has played some part in our collective progress, for which I am grateful. I encourage any and all to share their journeys with us and enrich our knowledge and respect for our past.

The central thread in my story is a 32-year relationship with Meyer Sound’s Source Independent Measurement (SIM). This was the first analysis system capable of measuring the acoustic response of sound systems during a concert using the music as the test signal. The analysis system approach originated in SIM has helped lead to the analysis programs that are now so common that most live sound systems use some version of it today.

It may be difficult for the modern engineer to visualize the crude tools of the 1970s. The only commercially available professional loudspeaker systems were targeted for fixed installations such as cinemas and “public address” systems, and weren’t the least bit ready for trucking, stacking or flying. The enclosures were not ruggedized with internal (or external) steel framing or integral rigging. 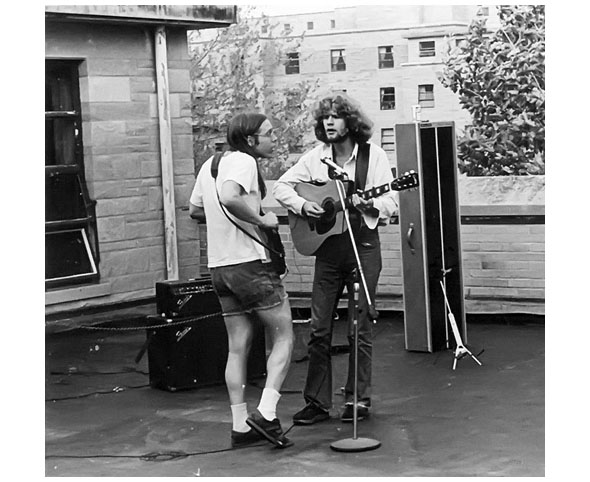 An “old school” column loudspeaker, the Shure Vocalmaster, which was introduced in 1967 as the first complete system (mixer, amplifier and loudspeaker).  Legend has it that the Beatles used this at Shea Stadium concert (1965). It was not, but the system on the field was not much more powerful than the Vocalmaster shown here. We’re using it for our “Let it Be” concert on the roof of a dorm at Indiana University in 1975.

Popular music concerts needed portable power on a scale beyond the imagination of the loudspeaker manufacturers. Rental companies innovated in developing mobile touring boxes while several manufacturers transitioned into the role of supplying the driver components inside them.

At the time I entered the pro touring market, systems were described by which rental house made the boxes and the maker of the drivers, i.e., “a Showco system with JBLs.” Nobody (at least that I knew of) was touring arenas with off-the-shelf boxes from a manufacturer. That was for high schools, cinemas, and “Hair” on Broadway.

Bob has been designing and tuning sound systems for over 30 years. The third edition of his book Sound Systems: Design and Optimization is available from Focal Press. He lives in NYC and is the director of system optimization for Meyer Sound.
All Posts
PrevPreviousPSW Top 5 Articles For March 2016
NextFirst Baptist Church Of Redlands Outfitted With Renkus-Heinz Iconyx Gen5Next
Study Hall Top Stories
Explore All Study Hall