Logic Systems Sound and Lighting of St. Louis provided the two-day Rock on the Rang’ (ROTR) Festival in Columbus, OH with audio and lighting production for the main stage that included 36 elements per side of a NEXO GEO-T line array.

Logic Systems has provided audio and lighting for ROTR since its inception, and has enjoyed seeing it grow from a local radio show to a national event in just a few years.
.
For this year’s festival, which is believed to be the largest implementation of a NEXO GEO T ever, Logic Systems sub-rented some of the main cabinets and power from ESI Audio in Tampa, Florida.

The system was designed to provide even coverage out to 450 feet. SPL averaged between 115 and 120 dB, with peaks in the 124Bb range. Doug Fowler of Fowler Audio was on hand to help with system tuning and alignment.

“The sound quality and overall performance were nothing less than stunning,” states Chip Self, President of Logic Systems. “Without exception, the guest engineers were very impressed with the system’s performance. In fact, most artist engineers did little, or no, system EQ.”

The lighting system included 18 Vari*Lite VL-3000 profiles, 12 Vari*Lite VL-3500 wash, 14 Martin Atomic 3000, and 14 Coemar iWash-575EB fixtures, along with 12 Eight-light Moles. Lighting control was via a full size GrandMA, with a GrandMA Ultralight as a redundant backup. 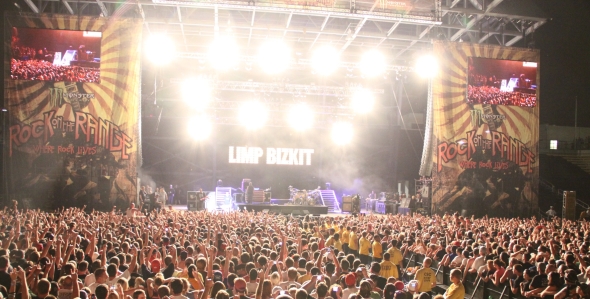