Less Can Be More? Ways For Musicians & Engineers To Work Together In Harmony

Opening lines of communication to help engineers work with the musicians and help them get as close as possible to their ideal mix.

Editor’s note: This one goes back a few years, but the information remains relevant today.

The past 50 years have witnessed the birth of rock, punk, ska, hip hop, electronica, emo and so many other genres of music, that one has to be either obsessive compulsive (or in college) to distinguish between them all.

During this same period, there have been countless refinements and enhancements in the technology, that allow us to record, play and appreciate music.

Despite all the sonic and stylistic changes that music has undergone since the 1950s, the most common vehicle for presenting the music to a live audience has remained virtually unchanged: the rock band.

Every room presents sonic challenges of its own. Couple this with the fact that every band’s set-up, volume and sound presents another set of variables, and it’s easy to understand why creating good live sound is still so difficult and why unwanted feedback still exists, even at the dawn of the new millennium.

To help sort out some of the challenges unique to mixing live rock performances, I talked to three musicians who’ve collectively done thousands of live gigs in a variety of groups and venues.

– Jon Evans (bass) grew up in Cape Cod, MA. He started playing when he was 7 years old. He kept playing throughout junior high and high school and then attended Berklee College of Music, graduating in 1991 with a focus on performance.

Evans spent two years touring the world with Tori Amos and can be heard on To Venus and Back, her live double album. He has also played with Paula Cole, Linda Perry, Alex DiGrassi and Red Fish Blue Fish. 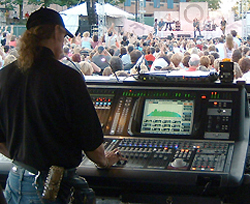 Evans says “when there are monitors, musicians have a tendency to forget about the band’s sound and let everything be fixed by the monitors. I think that’s a general misconception we have. The best thing is to try to play with people who are interested in getting a good balanced sound on stage.”

He continues, “when I was with Tori, we had the same monitor engineer every night for 2 years and we tried to get as little as possible in the wedges, just enough to fill in the missing pieces.”

Evans has a rather evolved understanding of the dynamics of a musician’s role in constructing a mix.

He explains, “any general problems with a person’s instrument are only magnified by the FOH setup. Musicians have to be responsible for their tone, the sound they send to the engineers in the first place.”

He feels that the blame for a lot of problems is erroneously directed at the monitor and FOH engineers when it should actually fall on the musicians shoulders.

At the same time, Evans acknowledges, “sometimes the FOH engineers make things too loud. Often, the musicians are blamed for the volume on stage, but the FOH engineer doesn’t have to use all 50,000 watts of power to make it rock.

“At some point, the FOH engineer needs to communicate to the band that their onstage volume impacts the way the house is mixed. It really is a partnership, ultimately.”