This article is provided by SoundGirls.org

Wherever you are in your career, I believe there’s always something new you can learn. It’s a bit of a buzz when you encounter a new skill, then master it for the first time.

A few years back, near the top of my list of skills-to-learn, was mixing large-scale (West End, Broadway or touring) musicals. The majority of my experience as a theatrical sound designer and operator had been soundscape design and mixing for plays, live variety and dance productions.

Although I had experience mixing for small musicals and bands and music ensembles, my experience with large-scale musicals was limited to backstage tours and being an enthusiastic member of the audience.

It was a gap that I felt I needed to fill. After all, if I wanted to work at a high level in theatrical sound design, it made sense that I know as much as I could about all aspects of theatre sound.

For those who haven’t worked in large-scale theatre in the UK before, here’s a brief overview of the sound team structure. It is similar for touring productions and I imagine probably for large-scale theatre in the US as well. The sound designer is at the top and handles both the live sound and the prerecorded sound – systems, mics, soundscapes, backing tracks and liaison with the creative team.

Under the sound designer, is the production engineer who fulfills a similar role to a system tech: what goes where and how it all fits together. The Sound No.1 reports to the sound designer, is primarily responsible for mixing the show and manages the No.2 and No.3. The Sound No. 2 is based backstage and is in charge of radio mics and will also learn how to mix the show so they can deputize for the Sound No. 1. Larger shows will have a Sound No. 3 (and some have a No. 4) who will deal with radio mics as well and will dep the No. 2 when necessary. 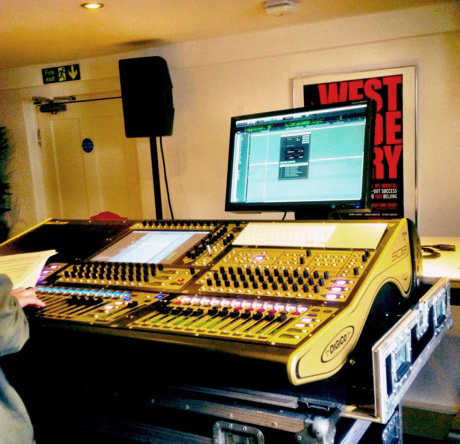 The established route to becoming a No. 1 (the person who mixes the show) is to rise through the ranks. Starting as a No. 3, moving up to a No. 2 on the same show (or a different show), and after enough experience, moving up to work as a No. 1. Many drama schools and universities in the UK which offer technical theatre courses provide students the chance to work as No. 3 or No. 4 as part of practical placements. It is common for technical theatre graduates who specialize in sound to go into No. 3 positions when they graduate, and then work up the hierarchy from there.

This is great if you trained in London or at a drama school with links to London theatres. For those of us who come to London from countries without a large theatre scene or who are based in smaller theatres outside of London, the opportunities to work as a No. 2 or No. 3 on a large show may be few or non-existent. It was certainly that way for me. I’m also at a stage in my career and my life where I can’t afford the time it takes to work up from a No. 3 position.

So how could I learn how to mix musicals? Enter the Orbital Sound course Mixing for Musicals, held over a two-day period at the Orbital Sound facility in south London. I found out about the course via the Association for Sound Designers and it seemed exactly what I was looking for. A chance to get my fingers on faders and practically learn about what it feels like to mix potentially 80-plus channels in one show. 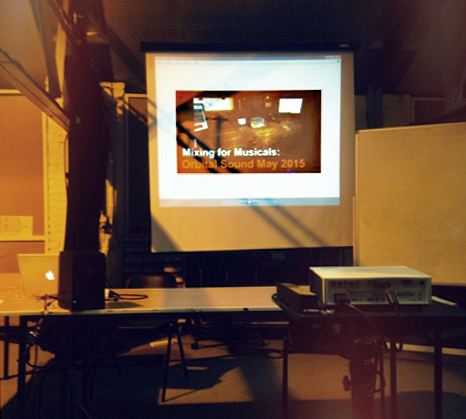 Arriving on the first day, I wasn’t sure what to expect. Orbital Sound is an established and respected hire company who provide sound systems and sound design services for high-level productions around the world. I wasn’t worried about the quality of training, but I was slightly concerned whether I had potentially signed myself up for two days of debating the pros and cons of the config of DiGiCo versus Yamaha desks. There’s only so many acronyms I can take before my brain hurts.

Thankfully, I had nothing to fear. One of the best aspects of the course was that it catered to most levels by establishing the level of knowledge of the group, then structuring the amount of time spent on theory, questions and practical experience accordingly.  There was plenty of time spent on establishing the basics of modern musical sound systems, speaker placement, matrixes and VCAs. There was also time made for those in our group who did want to talk about DiGiCo T automation versus Yamaha recall safe. Best of all, over half of the course was hands-on experience of programming a desk and learning how to mix line by line.