In searching for the solution, Giannetta turned to Powersoft’s Quattrocanali — a compact, 4-channel amplifier platform — for not only its feature set but also its reliability.

“As far as I’m concerned, the real selling point for the Quattrocanali is its advanced DSP processing and specifically its ability to easily import FIR filters to do accurate loudspeaker system optimization,” Giannetta says. “That is a primary design criterion and selling point for us, and the systems integrators we work alongside.” 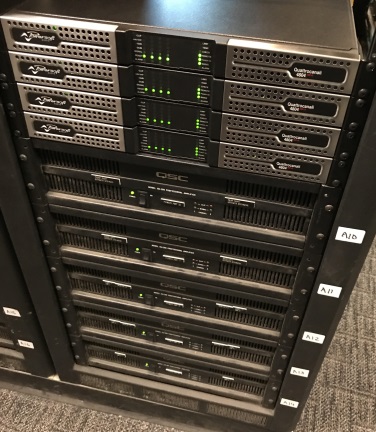 At the end of August just before school started, Heritage High School, a 9th-12th grade high school located in Brentwood, California, one hour east of San Francisco, replaced the amplification in its gymnasium loudspeaker system which features 8 loudspeakers.

“The key element was the fact that with the advanced DSP processing we were able to optimize the entire system, while making major improvements to it,” explains Giannetta. “Also by installing the Quattrocanali 2404 DSP+D amplifiers, we were able to reduce rack space and draw way less power than the previous amps the school had installed.”

Meantime, located just off Modesto’s busy downtown DoMo district sits Modesto Junior College — a public, 2-year institution with a significant Performing Arts program. The College’s theatre’s loudspeaker system is used regularly throughout the year for productions such as Aesop’s Fables and Agatha Christie’s Spider’s Web. When it began suffering system failures, Giannetta was brought in to program the DSP system.

During the process, Giannetta also specified a new amplifier platform for the LCR loudspeaker system and selected four Powersoft Quattrocanali 4804 DSP+D amplifiers — both for their advanced programming and compact size.

“The original amp took up 24 rack spaces, and with the Quattrocanali we were able to replace it with 4 rack spaces of amplification,” Giannetta explains. “To top it off, the folks at the theatre have said that the system sounded better after we installed the amplifiers then it did when it was first installed 8 years ago.”

An avid user of Powersoft products for 2 1/2 years, Giannetta said the company’s all-around ease to work with makes it an effortless choice every time. In addition, the overall reliability of Powersoft’s amplifier platforms has been a key ingredient to his success.

“We’ve had zero failures in the 2 1/2 years I’ve been working with Powersoft amps,” Giannetta says. “That’s a big deal for power amplifiers because they can generate so much heat, but we are happy to say that’s been our experience from the start with Powersoft.”