De Préférence integrates Syva cabinets and Syva Low subs into the decor for event in the Cour Marly of the Louvre’s museum.

Held in the Cour Marly of the Louvre’s museum, the Louis Vuitton Autumn/Winter 2017 show at the recent Paris Fashion Week featured Vuitton’s models showing off the fashion house’s new collection amongst white marble statues from the reigns of Louis XIV and Louis XV.

Usually, the specification for such a show’s audio is that it should be heard and not seen, but on this occasion, L-Acoustics’ new Syva system took a starring role.

Audio company De Préférence has collaborated with Louis Vuitton for many years and has become a master of invention, conjuring up new ideas for each event.

“Each time the Vuitton team does a show, they want something different,” says De Préférence’s Alain Français. “But one thing is always the same – they never want to see the loudspeakers. This means I’m always looking for new equipment and new ways of hiding the cabinets.

“For this show, taking place in an exceptional space with so much history and impact, we considered and tested a lot of different options. Because the Cour Marly is entirely constructed of marble and has a glass roof, it’s an incredibly reverberant space. Trying to find a solution that could cope with that, deliver the right amount of SPL, have the right tonal range and be invisible was proving difficult, particularly as there really is nowhere to hide large subs in the room.” 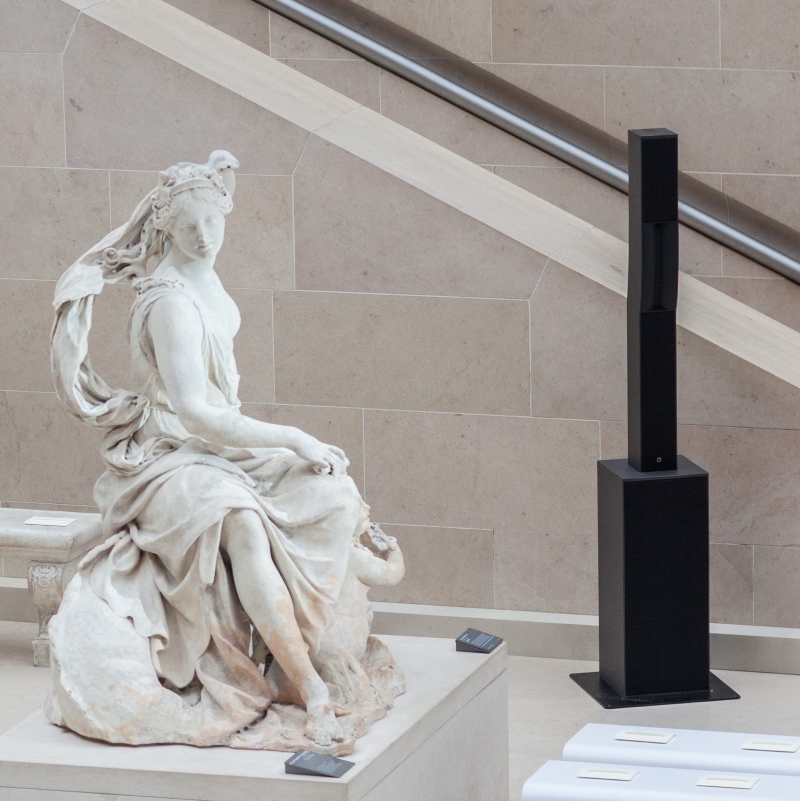 It was at this point that Alain was introduced to the just-announced L-Acoustics Syva, which features six five-inch MF speakers providing usable bandwidth to 87Hz and three 1.75-inch HF diaphragm compression drivers, loaded by DOSC waveguides in a J-shaped column progressive curvature.

Syva Sub features one high-excursion 12 inch driver equipped with a KS28 woofer motor to further extend the bandwidth of the system in the sub frequency domain down to 27Hz.

“As soon as I saw Syva, with its remarkably fluid form, I suspected this might be a good solution, and as soon as I heard it, I knew it was right for this project,” Français continues. “L-Acoustics’ Cédric Montrézor and I demonstrated it to the Vuitton team and they were completely convinced by the sound and were impressed enough with the look that they chose to make it part of the set. No need to hide it.”

Français worked with Montrézor on the audio design for the show, settling on a system comprising 22 Syva positioned across the Cour Marly’s three levels – all of which were being used as part of the catwalk – to ensure complete coverage.

“Normally we wouldn’t use 22 loudspeakers to do this kind of room,” says Français. “Six would be sufficient, but by upping the speaker count we didn’t need to push the system too hard, allowing us to handily cope with the room’s reverberation.”

The result, says Français, was stunning: “With other column systems there is little or no low frequency without adding a sub. Syva simply has more bandwidth, which means it delivers a sound that is richer than you can achieve from other systems. Syva’s size belies its power and its 140-degree horizontal coverage is truly impressive.”

With the Paris Fashion Week event proving Syva’s success, the team at Vuitton recently requested its return to the Louvre – this time in the hall in which the Mona Lisa hangs, for an exclusive private dinner launching a new line of handbags.

“This was the first time the Louvre had allowed such an event, so it was a very big deal,” recalls Français. “We used Syva again, but this time just two cabinets and for speech only. The Vuitton team was pleasantly surprised that we were able to cover the entire massive room with just two loudspeakers and they were really impressed with the results.”

Français declares that he now has a problem.

“We like to learn about everything and I am open to using products from every manufacturer. But no one else is doing anything like Syva and it’s so good that once people have heard it, they don’t want another system. We must be very careful about that,” he says with a wry smile. “But the truth is, whilst other column systems are good, Syva is simply a cut above.”