Kesler Sound provides sound production for Western events in Alberta, Canada and the neighboring territories across the border in the United States. The company embraces the changing and unpredictable nature of these events as they’ve transformed from the dusty rodeos of yore to modern-day multimedia events that incorporate a loud and varying soundtrack alongside live performers, announcers, and the traditional livestock entertainment that has kept large crowds in attendance season after season.

Kesler Sound’s latest innovation has been the implementation of the Powersoft M-Force transducer in their custom-made subwoofer boxes, a development which has changed the way they provide their services for these types of events.

“The Rodeo-style event has been changing. It’s much more of a production than it was in the past,” explains Kesler Sound founder Kurtis Kesler “In addition to the abundance of music we have going during the events now, we also have to accommodate announcers and live entertainers. The dynamics are always changing, and it pushes systems – HARD.”

Kesler, who has spent the last twelve years building his own sound systems and providing audio for Western events, realized early on that the demands of these events were different from a typical live concert or performance. Not only did they require a high-quality system that would be clear and audible over distance, but they needed to be rugged to handle the physical realities of these events including dust, mud, and the fact that no inclement weather would ever cancel an event.

“We’re out in the dust every day and the show goes on whether it’s rain or shine,” says Kesler. “We’ve designed all of our systems to be IP65 rated for dust and rain so that no matter what happens, they’re still reliable under these conditions and are still able to maintain complete sonic quality.”

A big part of this sonic quality has been his application of Powersoft’s M-Force transducers in his custom-designed boxes, a design which has utilized M-Force’s high-efficiency moving magnet design to deliver the low-end that Kesler requires at a power level and quality that has allowed him to forgo the traditional double 18-inch design and ultimately save space and cost.

Kesler initially reached out to Powersoft about working with M-Force in 2016, designing his first box and testing it out at his shows that summer. He was immediately impressed by the quality and found himself tweaking his designs back and forth while sharing his findings with Powersoft. “They were so welcoming, and I wouldn’t be where I am today without that. Even though I was a small company that was just starting out, they were always supportive and responsive to any questions or ideas that I had.” 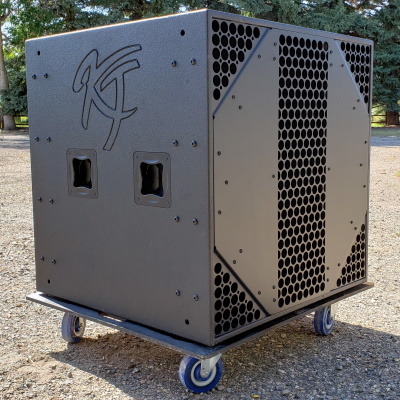 Kesler’s sub box, which is 34-inches square and weighs 210 pounds, has been deliberately tuned for a crisp and tight low end rather than a seat-shaking one, allowing him to accommodate the wide variety of music choices that are now found at the types of events that he works.

“In a rodeo you can go from classic rock, to country, to pop, so you have to be able to cover everything,” he says. “Although it has the ability to drop to 30 hz for a nice rumble if needed, I was focused on a box that could do all types of music equally. By using M-Force I was able to get better detail and articulation out of it than I would a traditional double 18. They’re really amazing.”

Kesler’s M-Force equipped sub boxes have also allowed him to dramatically cut down on the number of subs required for the events he works, which he says would traditionally require quadruple the number of boxes for a 5-6,000-person event. Doing so has not only allowed him to deliver the same power and quality with less equipment, but it has also made his work more cost-effective as he requires less transportation and set-up to deliver the high-quality sound that he has become known for – something that occasionally requires him to win over a few skeptics. “My favorite reaction is showing up to an event and having people say, ‘You only brought four subs with you?’ only to have them hear it and have their socks knocked off,” Kesler says.

Kesler runs his systems with Powersoft’s ArmoníaPlus software using a single Cat5 cable that encompasses a digital AES signal, analog audio signal, and full system control. As he’s continued to innovate he’s made his systems smaller and more efficient, all while continuing to design them to be rugged and weather ready for whatever nature has to throw at him.

“I got so hooked on the challenge of designing these things,” he says. “It’s always changing and that’s what’s exciting to me, and if you’re able to come at it with fresh ideas people really see what you’re capable of, and that’s really rewarding.”