After upgrading to the VENUE profile there was a tightness and clarity to the sound that they'd never heard before.

Nearly two decades since a handful of congregants gathered in a rented school cafeteria for Kensington Church’s first service, today Kensington’s five campuses are the epitome of activity.

Bustling with activity, there’s always something going on from youth programs and community groups to multiple services throughout the week.

As veteran engineer, Tim Corder explains, the VENUE is the first phase of an upgrade plan that will eventually include a new P.A. system.  However, Corder observes, the new Profile console has already delivered far more than expected.

“The VENUE system was the only thing we changed, so we were able to clearly hear what a difference it made,” Corder says. “I was sitting in the booth with the music director, and we were just giggling like little kids.”

“There was a tightness and clarity to the sound that we’d never heard before. I’d never have believed one piece of gear could make such a difference. Even our lead pastor – who’s definitely non-technical –  remarked on the difference.”

No stranger to digital consoles, Corder cites several factors that influenced the decision to choose VENUE. “One of the main considerations was the fact that we don’t have a monitor engineer. When the church started 18 years ago they didn’t have one, and that’s never changed.”

“It’s a big job for the FOH engineer, who has to contend with both in-ears and wedges in addition to the house mix. The VENUE Personal Q option gives us a great degree of interaction between the engineer and the musicians.”

The VENUE system’s integration with Pro Tools systems was another deciding factor, but not for the usual reasons. “We don’t do a lot of live multitracking,” Corder admits, “but our music team does a lot of their composing and arranging in Pro Tools.” 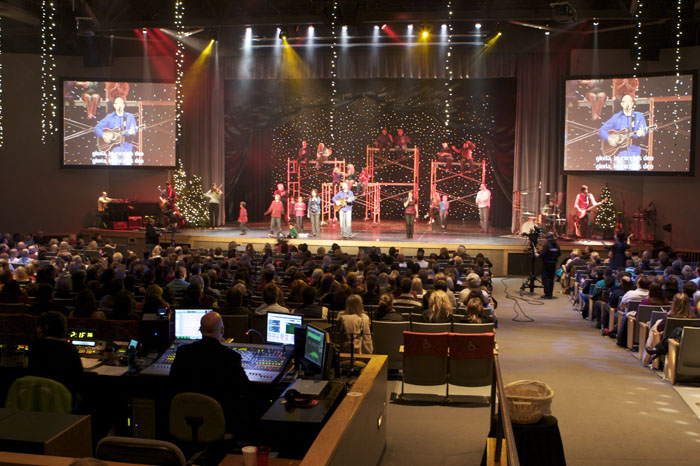 “Being able to work with systems that speak the same language means I can be an active collaborator. When they bring me a new song, I can pull up the same plug-ins they used in the demo, and deliver a live mix that sounds like what they intended. That kind of partnership is invaluable.”

Corder also points to Virtual Sound Check as an important feature. “I can come in on a Tuesday morning and fine-tune the mix without the pressure of a live congregation,” he says. “It also allows me to see what’s happening with the monitor mixes from up on stage, as well as allowing the musicians to come out to the console and hear what their mix sounds like.”

Overall, Corder is very happy with the new system. “VENUE has completely changed the way I work. It allows me to be more of an artist. And the system is so sophisticated, so rock solid, and has such great support from the company. The Avid folks really did their homework, and it shows.”