Expomeeting selects Kobra-KK102 loudspeakers and Thunder-KMT18 subwoofers for coverage at the Salone dei 500 of Palazzo Vecchio.

The Salone dei 500 of Palazzo Vecchio has long held great importance for the city of Florence. Measuring 54 meters long, 23 meters wide, and 18 meters high, it is the largest and most important room in terms of artistic and historic value in the old place and the largest room in Italy made for a civil power palace.

With the number of events held in the hall, organizers saw the need for a fixed audio system with the ability to adapt to the different occasions. The audio installation required optimal coverage of the Salon di 500, keeping the visual impact as low as possible. Given their discreetness and throw as well as their Florentine connection, K-array audio solutions was the obvious choice.

Originally built during the Renaissance to host meetings for representatives of the democratic government of the Florentine Republic, or the Great Council of 500, the Salone dei 500 has changed overtime to accommodate every owner of the palace, transforming from a hall commemorating important battles with artworks to be commissioned by the two greatest Florentine artists of the time, Leonardo da Vinci and Michelangelo, to the boardroom of the Duke Cosimo I de’ Medici, where he received ambassadors and gave audience to the people. 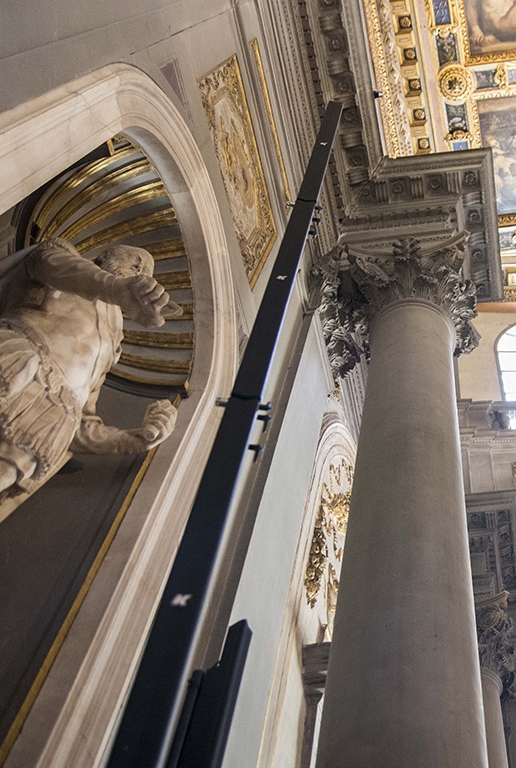 The biggest challenge the hall poses is that it is very reverberant. The large frescoed walls, the very high ceilings and lack of specific acoustic treatment tend to abruptly reflect the sound. Traditional speakers tend to distribute the sound in all directions, resulting in a great deal of energy sent to the walls and ceiling. To avoid the resulting reflections which creates a sort of rumble sound and greatly damages the intelligibility inside the room, integrators Expomeeting proposed a line array speaker system composed of 8 Kobra-KK102 loudspeakers and 2 Thunder-KMT18 subwoofers.

The Kobra line arrays are able focus the sound beam on the vertical plane, meaning the sound energy concentrates along the axis of the diffuser and is not distributed towards the ceiling.

“This behavior is all the more accentuated as the column is long which is why we proposed to install two 3-meter columns on each side of the stage. This configuration not only minimizes reverb, but also effectively covers the entire salon, despite its 50m in length,” explains K-array product specialist and system designer, Daniele Mochi.

To ensure sufficient sound pressure at lower frequencies, the two 18-inch subwoofers were added which also served as support for the column speakers. The amplifier inside the subwoofers also allows the passive columns to be piloted, making the installation easy and functional.

And for proper monitoring for guest speakers or performers on the stage, two additional Kobra-KK102 line array speakers were installed vertically behind the main system.

All parties were quite pleased with the installation: “The column arrays are the perfect setup for the room,” says Mochi. “The Kobras meet all the requirements needed to make the installation a success.”