Lab.gruppen has announced the appointment Jon Alkhagen as its new managing director. He brings a strong pedigree in high-end technology manufacturing to the role, which will see him lead both Lab.gruppen as well as its subsidiary Lake brand.

Alkhagen joins the business at an important time of growth and development, with Lab.gruppen having recently launched the new 1U install-centric E Series amplifier platform, a departure from their success in high-power 2U touring amplification products, in addition to continuing to develop stand-alone products under sister brand Lake, which recently introduced the new LM 44 digital audio system processor.

After graduating with an M.Sc. in Engineering Physics from Uppsala University in 1996, Alkhagen was critical to the success and overall development of a number of global telecommunications companies such as Allgon, where among other roles, he was design engineer and project manager and managed the R&D activity for a company that went on to claim a 40 percent market share.

Most recently, he worked with Ascom Wireless Solutions, where he was integral to the systems integration with other branches in more than 10 countries worldwide.

“Lab.gruppen is a brand that is known throughout the world for its superior design and build quality in all of its products, and the brand itself and the history behind it are part of the reason this position was so attractive to me,” Alkhagen states. “Likewise the Lake name has become synonymous with the cutting edge of digital audio processing in the touring and live sound arena, carrying with it peerless credentials and impressive brand loyalty.

“While we have a huge opportunity and improvement potential in our operations, it is clear to me that we have the individuals and the right knowledge in place to allow Lab.gruppen and Lake to grow into true market leaders that are both highly profitable and streamlined,” he continues.“I am proud to be joining the business and look forward to working more closely with my colleagues in Sweden and across the world.”

Anders Fauerskov, CEO of parent company TC Group, adds: “I am delighted to welcome Jon as managing director of Lab.gruppen. His vast experience in technology manufacturing is the perfect match for a company that is at the fore front of its field, and as we move forward, I’m convinced his leadership and vision will prove to be instrumental to that ongoing success.”

Alkhagen is based at the company’s headquarters in Kungsbacka, Sweden. 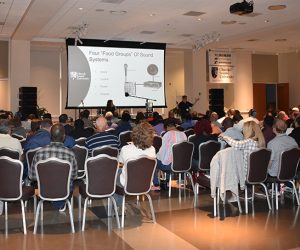