John Penn Of SSE On The Current (And Future) State Of The U.K. Live Sound Market

“What really worries me is that artists don't achieve the same mega-sales status that they used to."

John Penn has seen a lot in his 35-plus years in the pro audio business, which officially began with the founding of Disco Sigma Sound Enterprises in 1975 at the age of 19.

Now the managing director of that fledgling start-up – SSE Audio Group, the largest PA firm in the United Kingdom – John recently sat down with me and shared his thoughts on the sound hire market in his part of the world, as well as some of the long-term goals for the company.

Paul Watson: How is business in general, and which areas in particular have you seen the most change?

John Penn: Well, as usual, we had a very busy festival season, as we supply to more in the U.K. than any other rental company, but what’s impacted us most is that touring is way down. There are far less shows being booked, and we’re also seeing a double-whammy, where the Academy market is now fully installed, so we’re no longer supplying to those venues either.

It’s partly down to the recession in that people have got less money in their pocket, but people are now being far more careful generally about where they spend their money.

PW: And what about trends?

JP: Well, for years now, we’ve seen the trend of the market expanding, but now, there just isn’t a next generation of concert-goers to work with, so the market isn’t expanding. That’s a big change. Youngsters have all of these other things to do as social activities, such as gaming, so perhaps making sure that they see going to concerts as a sort of mission-critical thing would be a good idea.

There is still that cultural phenomenon of going to a festival and experiencing the vibe, which I understand fully, as it’s something I engaged in myself when I was 19 years old – that’s really strong. The problem is that it isn’t translating to people just wanting to go to a show as much as we would like it to.

PW: Do you think it’s due to cost of live shows?

JP: Well, even the Academy venues are moderately more expensive compared to more of the small clubs you used to be able to go to, so that is a factor, yes. And this fall, there were far less shows generally as promoters couldn’t afford to keep losing megabucks on promoting shows that don’t sell, and that’s not good for anyone.

PW: U.K. bands don’t seem to be touring anymore, opting to play festivals instead, and I guess it makes sense in a way: less outlay on production costs, the audience is already there, so artists don’t have to worry about selling tickets, and when the U.K. festival season ends, bands can go and do the same thing in Europe, or even Australia…

JP: This is exactly right – there just aren’t many tours going out, which means there’s a lot less work around. And at the same time, the work that is out is on very tight budgets. It used to be that the money came from the record companies, but that’s no longer the case; they have to make enough out of the shows not just to sustain them when the shows are out, but to sustain them until they go out again.

PW: So there’s a lot more pressure on achieving a good return on investment then?

JP: Oh, a huge amount more. Budgets are being squeezed, the artists have to be confident that they can sell the shows, and the promoters are less confident than they were, so are offering smaller guarantees. This squeezes pricing even more.

PW:With more venues installing their own systems, how do you as a rental company compensate that effective loss in business?

JP: The difference between SSE and a lot of our competitors is that we’re a much more diversified business. Our installation department and sales department are very big parts of the business, and they’re compensating for some of the loss of touring work.

We have this problem that through the summer months, we are flat out (busy), but it’s difficult when you have such a feast and famine situation where you do so much business in those three months in the summer compared with what you do between September and May.

The diversification has certainly enabled us to hold our own, but it’s not enough. We have a key problem that with the amount of investment that’s required, we can’t possibly make the money back to work at the level we are with a three-month season each year.

We have significant issues to deal with as we’re pretty much geared up in terms of staffing levels to be able to deal with working at that volume all year round, so it’s even harder for us to make money in those down times.

PW: So how much of the business is install at the moment?

JP: The installation side is a very big variable, because you win a job and you’re suddenly really busy, then for whatever reason, you don’t win any more, maybe because you’re busy doing those installs! [Laughs] The installs themselves are a bit seasonal – companies realize that there are key times of the year to get a re-fit done that don’t disrupt their businesses; thankfully, those key times are January and August, and they’re our quietest months. 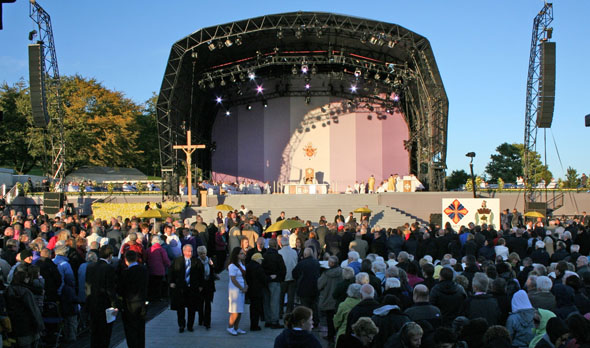 An SSE system for 75,000 to hear a public mass by Pope Benedict XVI at Bellahouston Park in Glasgow, Scotland in late 2010. (click to enlarge)

PW: How will next year’s [London] Olympics affect business?

JP: Actually, we’ve already got some extra work off of the back of the Olympics. Live Nation has an event in Victoria Park that we’re doing, which will be running throughout the Olympics – and that’s a big job. I also think that there will be a bunch of other work to pick up, which I think we’re well placed to deal with.

PW: And how do you see business changing in, say, five years?

JP: Well, it’s unlikely I’ll be doing this job, because I’m 57 next year. You can’t work at 57 in the same way you can when you were 40, and I feel that difference already. People who put themselves under too much stress and pressure are never able to enjoy their retirement at the end of it.

While I’m not about to hang up my spurs and say ‘well that’s it’, like my Dad did, I plan to wind down gradually; but you have to have a vehicle to enable you to not be here, and to that end we’ve been building a management team at SSE with a global vision, because the industry’s definitely going to change.

PW: How will it change, exactly?

JP: Well, what really worries me is that artists don’t achieve the same mega-sales status that they used to.

Two of the biggest on the circuit are Springsteen and U2 – and they still sell a phenomenal amount of records, too; they’re still able to deliver relevant albums, which isn’t true of some of all the major players.

Look at the proportion of the top selling artists that are over 60: The Rolling Stones, Elton John, Bruce Springsteen, Sir Paul McCartney – all of the top grossing acts are in that league.

PW: And the likelihood is that they won’t be touring to the same degree in five years time either…

JP: Exactly, and there’s no one to replace them! That’s my great fear about The X Factor: everyone gets their 15 minutes of fame, but how many are able to build on that? Take That is a remarkable phenomenon – a British boy band that started 15 years ago, then came back bigger and better, but they’re the exception rather than the rule.

We need raw, groundbreaking talent. Adele is a phenomenal talent; O.K., she has a health problem at the moment, but hopefully she will get over that and go on and be a mega-seller, but it’s whether we have enough of them. That’s the big question. 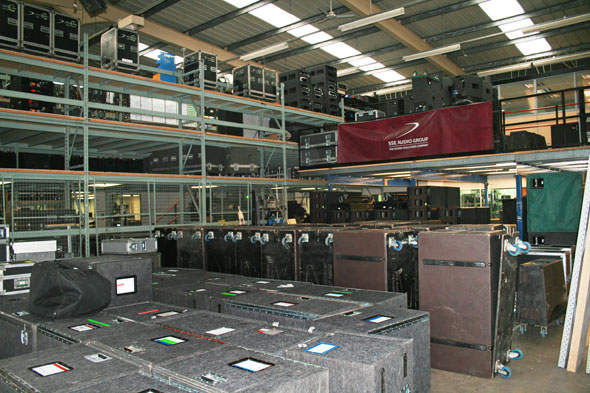 The SSE warehouse in Redditch, England. The company also has offices and warehouses in London and in Bradford as well as in France. (click to enlarge)

PW: Staying on long-term, with more and more European rental companies providing all-in-one touring packages, do you think the U.K. market will eventually have to say, “Right, I’m going to have to buy a lighting company’?

JP: We’ve been discussing this concept for years, and first of all, the U.K. market is too fragmented, even as sound companies. Our major-player sound companies are all independents, and although the Europeans always did a bit more of the whole production than the audio anyway, you’re right, they now do the trucks, the buses, the whole nine yards.

It’s an obvious way of saving money on production, and it’s a winner-takes-all situation. We feel that’s the obvious way to go in this country, but only up to a certain point, because you’ve still got quite a few big independent lighting and video businesses. As long as you’ve got Neg Earth and XL Video as independents, it will continue as it is.

The problem is, if we’re going to maintain ourselves as a sound company, we’ve got to be a much bigger business, so that we’re reducing the overhead and cost of delivering what we’re doing; and with regard to providing 360-degree production, the other problem is that the big three lighting companies, Neg Earth, PRG, and HSL, are all turning over big money, so we can hardly say: “let’s get a lighting division and find a company to buy,” because, well, who is there?

PW: Good point. But in theory, at least, you think it makes sense?

JP: Absolutely. The one-stop shop is something that will eventually be inevitable. It’ll just be a case of finding a partner so we can make it happen.

Paul Watson is the editor for Europe for Live Sound International and ProSoundWeb.