Is This Where The Mic Goes? One Guy’s Approaches To Microphones On Instruments & Vocals

There is no "one right and only way" with it comes to mic techniques, but here are some approaches that have proven successful

Keep in mind that this is the way I mic these instruments – you should not take it as the “right and only way”. Experiment, listen carefully and try to find “cool sounds” on your own.

Let’s begin with the acoustic guitar. Almost every acoustic guitarist I’ve worked with has had an internal pickup built into his or her instrument. This makes any sound mixers’ life tons easier for two reasons.

One: we can use a direct box (I like Countryman Type 85), which gives us greater gain before feedback than would a microphone.

Two: the pickup is in a fixed position on the instrument, meaning no matter what the person playing the guitar does (flips, stage dives, summersaults), we will get a constant and stable sound source. 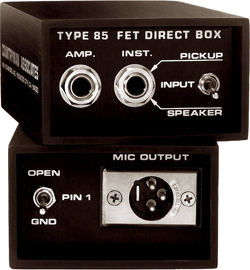 If we were using a microphone on a stand, any movement of the player holding the instrument would effect the signal.

Of course I’ve had a few players who did not have a pickup. When this happens I usually use an Audio-Technica ATM63 or Shure SM57, placing it as close to the instrument as possible and aiming it at the top of the sound hole. This provides a good combination of the body and the neck resonance.

The closer the mic is to the center of the sound hole, the more mid range (sustain) and less high end (scratch).

Here’s something else to try. Use both DI (direct box) and a mic. Now the gain on the mic can be turned up without having to worry about it feeding back in the monitors. (Only put the DI in the monitors.) I’ve gotten some pretty big sounding acoustics with this technique.

Let’s move along to the electric guitar. Electric guitarists take pride in their sound and are usually particular about what kind of amplifier they play through, so capturing that sound can be particularly important.

I usually use an ATM63 or SM57 and place it against the grill of the amp, aiming it at the speaker cone. 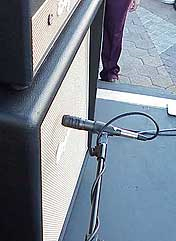 Looking at a speaker, the center part is called the dust cover (It looks like a little dome), and around that dust cover is the cone section. The cone is the part of the speaker that is vibrating the air to make sound.

Sometimes guitar amps have multiple speakers, so it’s always good to ask guitarists if all their speakers are, first of all, working, and then if the speakers are all getting the same signal.

If they’re running a stereo feed, consider using two mics to capture that effect. I like putting the mic right against the grill if it’s made of some type of fabric.

However, if it’s made of metal, then it’s usually best to place the mic about a quarter of an inch (1/4-inch) away – you probably don’t want the sound of the metal resonating against the mic.

Read More
Working On The Stage Sound—Moving From Mixing House To Monitors
Pages: Page 1, Page 2
1 2Next »