When it comes to maximizing their mix, streamlining workflow and meeting the needs of their artists, few monitor engineers are willing to say they’re doing anything entirely unique.

Still, every artist has different demands, and that informs choices made in monitor world.

We tracked down several engineers working in various genres to talk about the approaches they’ve developed to meet those demands, quickly and efficiently, at the console level.

For Bull, meeting the needs of his artist isn’t rocket science. “I try to keep everything as simple as possible and avoid doing anything tricky at the console level unless necessary. If we’re using the right microphone and the right preamp, my approach to the console is, ‘Hopefully, we’ll never have to talk about it.’”

The key to mixing McBride, he says, is to make the arena sound like one big mix: “Almost like using the room for reverb. We’re opening up for George Strait on a diamond shaped stage in the round. I’ve got 16 wedges out there. The main thing is output phasing, making sure everything hitting the right spot at the right time. If something’s feeding back, try moving the wedge, or throw one mix out of phase with another to see if that works.” 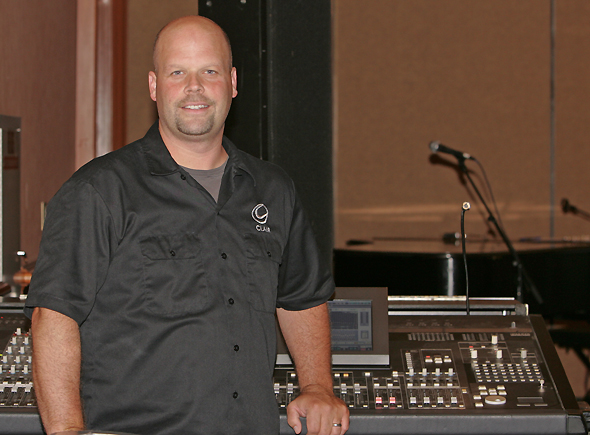 Robert Bull at a Yamaha PM5D. (click to enlarge)

Over his 15 years with McBride, Bull typically prefers to use an analog console, currently, the ATI Paragon. “It has output phase reverse right on the console, so even mid-show I’ll pop the outputs out of phase to achieve that level, also, the EQ is great and I can get around it fast in any situation. On the console, having an EQ on the output, and being able to get to that quickly, is important.”

His preference for analog also informs his preferred choice of digital desk, the Yamaha PM5D. “It’s as analog as it is digital in terms of work surface,” he notes. “Any time we’re doing a TV show, or fly gig I’m not taking my rig for, I’ll use that. It’s flexible, and when I select an input, I can see everything I need. If I need to get to something quick, I assign it to a user define button. It allows me to be as quick as I am on an analog console.”

Still, Bull maintains that the most important thing he does has nothing to do with the console. “It’s about the level of trust you have with the musicians. Honestly, getting in their heads is more important than what I do at the console. Once, I was working an orchestral show, an artist said, ‘I just can’t hear the note.’ I went to the conductor and asked, ‘Who has this note?’ He replied that it was the French horns, so we took a stem off that, and I told the artist, ‘four beats before you enter you’ll hear the horns get louder – That’s your note’.”