Powersoft has been developing leading power amplifier technology for several years. Based in Italy, the company has been enjoying increasing growth and acceptance in the North American market, as evidenced by the recent sale of 450 units of Powersoft DIGAM K-10 power amplifiers to leading sound company ATK Audiotek. (Go here for more details.)

At InfoComm this year, Powersoft has introduced Audio Suite software, wich provides PC-based control of numerous parameters found in the company’s amplifiers, as well as serving as the framework control protocol for current and future Powerswoft products.

Audio Suite allows users to manage and monitor all Powersoft K-Series products as well as remote versions of Q, D and QTU Series amplifiers. It’s downloadable (free of charge) from the Powersoft website.

A quick conversation with Robert Scovill of Digidesign confirmed what I had suspected – demand for the new Digidesign SC-48 digital console is strong. Last month I reported on the first public “trade show” debut of the SC-48, so you can read more about it here.

EAW has been steadily building a line of commercial audio products under the direction of Dave Raneses, with the results of that effort now coming to full fruition. Dave showed me the new DX1208 DSP matrix mixer that EAW Commercial is unveiling at this year’s InfoComm, and its a very flexible and expandable unit incorporating a lot of great features specifically for install applications. 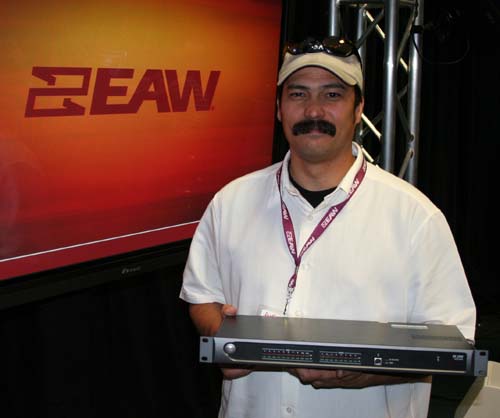 Four additional inputs on unbalanced RCA connectors allow the users to “stack” inputs, increasing the number of audio sources that can be connected, and yet another four digital inputs are available on S/PDIF with sample rate conversion to 48 kHz.

In additon, the DX1208 can also receive up to six logic inputs and send up to three logic outputs, combined on a single 18-pin connector and programmable via the included EAW DX Navigator software. The DX1208 has serial RS-232 remote capabilities via a DB9 connector on the rear panel, for control by AMX/Crestron and other third party integrated control systems. Two RJ-45 connections are provided as well, for linking multiple (up to eight) DX Link-enabled products together in a ring network topology.

I should also note that EAW is also unveiling the new MicroSub at 2009 InfoComm, the latest addition to the MicroWedge line. More on that soon. 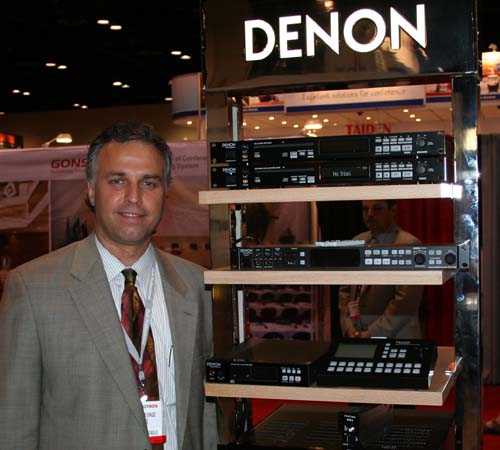 Both read MP3 files and uncompressed WAV files from SD or SDHC cards, and the DN-F300 reads USB drives as well.

The DN-F300 also has IR control and a microphone input with music ducking, exdellent for paging applications. The DN-F400 is a half-rack-space unit, controllable via RS-232-C and GPIO. An additional facet is an optional RC-F400 remote controller outfitted with a large LCD display and an intuitive control unit for instant playback of audio or audio elements such as sound effects.

More updates from 2009 InfoComm are coming, including a new products gallery. Check back often.