In The Studio: What Engineers Should Know About Meters

An excerpt from Mastering Audio: The Art and The Science by Bob Katz.

This article is the second part in a series on decibels, excerpted from Bob Katz’s book Mastering Audio: The Art and The Science. The first part is available here, and be sure to check out all our videos featuring Bob Katz.

We Won’t Get Fooled Again. Recording engineers rely heavily on their favorite meter, and this is not intended to change people’s favorite.

But as practicing engineers, it is prudent to learn the defects and virtues of each meter we encounter.

The VU Meter. Relative newcomers to the industry may have never seen a VU meter, and some of them may be using the word “VU” incorrectly to describe peak-reading digital meters.

VU should only be applied to a true VU meter that meets a certain standard. The first thing we must learn is that the VU meter is a dreadful liar… It is an averaging meter, and so it cannot indicate true peaks, nor can it protect us from overload.

However the VU does do one thing better than a peak meter—it comes closer to our perception of loudness, but even so, it is a very inaccurate loudness meter because its frequency response gives low frequency information equal weight, and the ear responds less to low frequencies.

Another problem is that the VU meter’s scale is so non-linear that inexperienced operators think that the greater part of the musical action should live between -6 and +3 VU, but this is wrong.

A well-engineered music program has plenty of meaningful life down to about -20 VU, but since the needle hardly moves at that level, it scares the operator into thinking the level is too low.

Only highly-processed (dynamically compressed) music can swing in such a narrow range; in other words, the VU scale encourages over-compression.

Hence the VU meter should only be taken as a guide. A much better averaging meter would have a linear-decibel scale, where each decibel has equal division and weight down to -20 dB.

Cheap and Dirty Peak Meters. Recorder manufacturers pack a lot in a little box, often compromising on meter design to cut production costs. A few machines even have meters which are driven from analog circuitry—a definite source of inaccuracy. 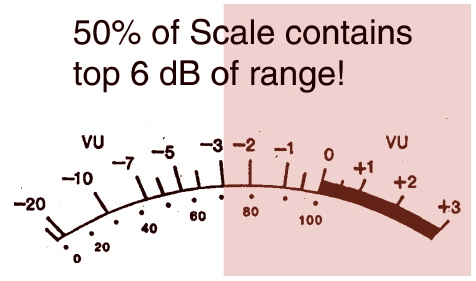 VU meter operators are often fooled into treating the top and bottom halves of the scale with equal weight, but the top half has only 6 dB of the total dynamic range.

Some manufacturers who drive their meters digitally (by the values of the sample numbers) cut costs by putting large gaps on the meter scale (avoiding expensive illuminated segments).

The result is that there may be a -3 and a 0 dB point, with a large unhelpful no man’s land in between. When recording with a meter that has a wide gap between -3 and 0, it is best practice to stay well below full scale.

Sample-Accurate and Sample-Counting Meters. Several manufacturers have produced sample-accurate meters with 1 dB (or smaller) steps, that convert the numeric value of the samples to a representation of the sample value, expressed in
dBFS.