In The Studio: Techniques To Get Great Sounding Vocals

Recording approaches for "the most important thing"

The singer is charged with artistically conveying the song’s lyric over a music track production that (hopefully) propels the song’s meaning and emotion across to the listener in an accessible and entertaining way.

Obviously the singer/artist/song are one of the main reasons engineers, producers, musicians and the studio personnel have jobs. They exist to facilitate the production of a song’s music and vocal performances. It is the focus of this article to deconstruct the process vocal recording in the studio.

To better understand the process of recording vocals and for illustrative and tutorial purposes, I’ve divided it into activities in two spaces: what goes on in the studio area and what’s required in the control room.

Recording studios come in all shapes, sizes and décors. There are only a few basic requirements conducive to getting a good vocal performance.

It does not take a special or a big room to record vocals but the studio’s size, acoustic properties and construction are just as important as a recording space as they are for acoustically louder instruments like drum kits, brass or string sections.

In the case of using a larger tracking room for overdubbing pop music vocals, engineers and producers prefer to “stop down” its size in order to record a dry vocal sound with little of the room’s ambient qualities included. This, of course, allows them the freedom of adding whatever ambient effects they feel appropriate later in the final mix. 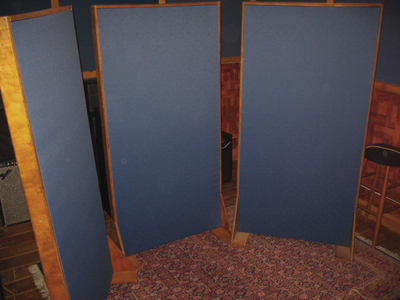 Gobos can help “stop down” the size of a studio. (click to enlarge)

Tall baffles or gobos are placed around the singer and mic to stop most of the room’s sound from being recorded along with the singer. If you are working in a large room with a pleasing decay time, there are plenty of reasons to record vocals sans any gobos.

The difference in ambience could work well to layer multiple tracks sung by the same person such as for double tracking or harmony stacking or for recording a singing group or choir.

You could capture a unique ambience possible only in that room instead of adding a simulation electronically from a commonly available digital reverb. I’m suggesting a high quality room like EMI’s Abbey Road Studio 2 — the Beatles’ playground!

If you are working in a small room or vocal booth, then dry is what you’ll get but make sure the dryness is not more of a tonality — an actual comb filter EQ effect caused by close, highly-reflective parallel walls, floors and ceilings.

Again, the use of a few gobos with soft, non-reflective surfaces will help kill those reflections.

You might try a Se Electronics microphone Reflexion filter — it uses a small screen of highly absorbent materials to surrounds the mic itself and prevents sound reflections entering the back and sides of the mic.

Especially good for acoustically bad sounding spaces like bathrooms, closets and hallways, a microphone filter “separates” the mic’s pick-up of the singer completely from the coloration of the surrounding space.

If you’re working in an “all in one space” studio, the room sound issues expand. You’ll have to eliminate noises from you computer’s fan(s), poor acoustics at the mic’s position, and external noises from A/C equipment or the streets outside, etc.

VocalBooth.com makes portable vocal booths — these look like old-time “phone booths” with a window and door and come in different sizes depending on how big the vocal singing party is going to be.

My own Tones 4 $ Studios is a single space setup used mostly for mixing, and for recording I use a product by RealTraps called a portable vocal booth. 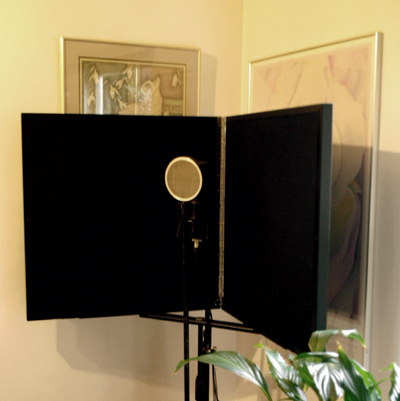 It’s a pair of 2- X 2-foot absorbent panels that mount to a mic stand and forms a right-angle corner behind the mic and singer. This configuration does much more than a mic filter.

The portable vocal booth removes the influence of the sound of the adjacent walls, provides isolation from the rest of the room’s sounds — be it other musicians or the racket coming from my Pro Tools rig (computer, drives, power amp fans) as well as reduces external street noises.

Singers appreciate it for the sound and also because they can pin the lyric sheets to the panels directly in front of them.

The singer’s “station” consists of a boom mic stand to hang the mic over and above the music stand, microphone, pop filter (if required), music stand with light, headphones and control box, stool, small table to hold tea, coffee or water etc. Or, in the case of a female demo singer I once recorded (whose name I can’t remember), a plate of strips of raw meat.

A metal music stand must be covered with soft cloth material to prevent sound reflection and checked to see if it vibrates sympathetically to the singer’s voice. Make sure it does not.

The entire station should be placed on a rug to mute any foot tapping and stop sound reflections coming from the floor. All mic, headphone and power supply cables should be dressed away so nobody trips and pulls over a multi-thousand vintage condenser mic over.

I try to locate the station under dimmable studio lighting for this reason and also for reading lyrics and for seeing the singer’s hand gestures and signals from in the control room — even if the studio is darkened.

The “look” of this setup—rug style, gobo colors etc. is up to the producer and artist’s tastes and preferences. It should look warm and inviting to the artist and help set up the vibe of the session. I think this all helps in subtle ways—it is more special treatment for the artist and transforms the space.

However, for some artists and producers, none of this matters, especially if scheduling, cost, budget and availability impinges on the optimum choice for a studio. At those places, you may have to do all this “remodeling and redecorating” yourself.

Two looks at a singer’s station. (click to enlarge)

With respect to the visual sightline to the control room, most of the time eye contact is wanted — remember, the producer is acting as the listening audience and the artist will look for reassurance or emotional “feedback” from him/her, the engineer and anybody else in the session in the form of facial gesturing or even body language.

I’ve worked in studios that used closed-circuit TV to see the artist singing who could not see us back in the booth. I can’t prove any connection, but I bet the quality and emotion of the performance will be different—but depending on the singer, maybe better or maybe worst.

Barry is a veteran L.A.-based recording engineer as well as a noted writer on recording topics. Be sure to visit his website, and also check out his related article, “The Wonderful Of Microphone Techniques For Recording Drums”.
All Posts
Top Stories
Explore All Study Hall