When most people think of stereo recording, the first thing that comes to mind is a matched pair of microphones, arranged in a coincident (XY) pattern. It makes sense, of course, since that’s the closest way to replicate a real pair of human ears.

But while XY microphone recording is the most obvious method, it’s not the only game in town. The Mid-Side (MS) microphone technique sounds a bit more complex, but it offers some dramatic advantages over standard coincident miking.

If you’ve never heard of MS recording, or you’ve been afraid to try it, you’re missing a powerful secret weapon in your recording arsenal.

More Than Meets The Ears
Traditional XY recording mimics our own ears. Like human hearing, XY miking relies on the time delay of a sound arriving at one input milliseconds sooner than the other to localize a sound within a stereo field.

It’s a fairly simple concept, and one that works well as long as both mics are closely matched and evenly spaced to obtain an accurate sonic image.

One of the weaknesses of the XY microphone technique is the fact that you’re stuck with whatever you’ve recorded. There’s little flexibility for changing the stereo image once it’s been committed to disk or tape. In some cases, collapsing the tracks into mono can result in some phase cancellation.

The MS technique gives you more control over the width of the stereo spread than other microphone recording techniques, and allows you to make adjustments at any time after the recording is finished.

Mid-Side microphone recording is hardly a new concept. It was devised by EMI engineer Alan Blumlein, an early pioneer of stereophonic and surround sound. Blumlein patented the technique in 1933 and used it on some of the earliest stereophonic recordings.

The MS microphone recording technique is used extensively in broadcast, largely because properly recorded MS tracks are always mono-compatible. MS is also a popular technique for studio and concert recording, and its convenience and flexibility make it a good choice for live recording as well.

The “Mid” microphone is set up facing the center of the sound source. Typically, this mic would be a cardioid or hypercardioid pattern (although some variations of the technique use an omni or figure-8 pattern).

The “Side” mic requirement is more stringent, in that it must be a figure-8 pattern. This mic is aimed 90 degrees off-axis from the sound source. Both mic capsules should be placed as closely as possible, typically one above the other.

How It Works
It’s not uncommon for musicians to be intimidated by the complexity of MS recording, and I’ve watched more than one person’s eyes glaze over at an explanation of it.

But at its most basic, the MS technique is actually not all that complicated. The concept is that the Mid microphone acts as a center channel, while the Side microphone’s channel creates ambience and directionality by adding or subtracting information from either side.

The Side mic’s figure-8 pattern, aimed at 90 degrees from the source, picks up ambient and reverberant sound coming from the sides of the sound stage.

Since it’s a figure-8 pattern, the two sides are 180 degrees out of phase. In other words, a positive charge to one side of the mic’s diaphragm creates an equal negative charge to the other side. The front of the mic, which represents the plus (+) side, is usually pointed to the left of the sound stage, while the rear, or minus (-) side, is pointed to the right. 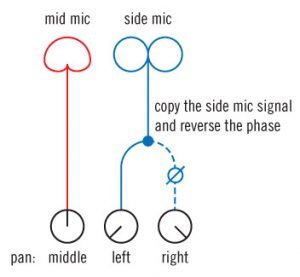 The signal from each microphone is then recorded to its own track. However, to hear a proper stereo image when listening to the recording, the tracks need to be matrixed and decoded.

Although you have recorded only two channels of audio (the Mid and Side), the next step is to split the Side signal into two separate channels. This can be done either in your DAW software or hardware mixer by bringing the Side signal up on two channels and reversing the phase of one of them. Pan one side hard left, the other hard right. The resulting two channels represent exactly what both sides of your figure-8 Side mic were hearing.

Now you’ve got three channels of recorded audio– the Mid center channel and two Side channels – which must be balanced to recreate a stereo image. (Here’s where it gets a little confusing, so hang on tight.)

If you’re not completely confused by now, here’s the actual mathematical formula:

Now, if you listen to just the Mid channel, you get a mono signal. Bring up the two side channels and you’ll hear a stereo spread. Here’s the really cool part—the width of the stereo field can be varied by the amount of Side channel in the mix!

Why It Works
An instrument at dead center (0 degrees) creates a sound that enters the Mid microphone directly on-axis.

But that same sound hits the null spot of the Side figure-8 microphone. The resulting signal is sent equally to the left and right mixer buses and speakers, resulting in a centered image.

An instrument positioned 45 degrees to the left creates a sound that hits the Mid microphone and one side of the Side figure-8 microphone.

An instrument positioned 45 degrees to the right creates exactly the opposite effect, increasing the signal to the right side while decreasing it to the left.

What’s The Advantage?
One of the biggest advantages of MS recording is the flexibility it provides. Since the stereo imaging is directly dependent on the amount of signal coming to the side channels, raising or lowering the ratio of Mid to Side channels will create a wider or narrower stereo field.

The result is that you can change the sound of your stereo recording after it’s already been recorded, something that would be impossible using the traditional XY microphone recording arrangement.

Try some experimenting with this—listen to just the Mid channel, and you’ll hear a direct, monophonic signal. Now lower the level of the Mid channel while raising the two Side channels.

As the Side signals increase and the Mid decreases, you’ll notice the stereo image gets wider, while the center moves further away. (Removing the Mid channel completely results in a signal that’s mostly ambient room sound, with very little directionality – useful for effect, but not much else.) By starting with the direct Mid sound and mixing in the Side channels, you can create just the right stereo imaging for the track.

Another great benefit of MS miking is that it provides true mono compatibility. Since the two Side channels cancel each other out when you switch the mix to mono, only the center Mid channel remains, giving you a perfect monaural signal. 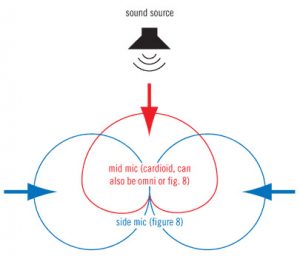 And since the Side channels also contain much of the room ambience, collapsing the mix to mono eliminates that sound, resulting in a more direct mix with increased clarity. Even though most XY recording is mono compatible, the potential for phase cancellation is greater than with MS recording. This is one reason the MS microphone technique has always been popular in the broadcast world.

Other Variations
While most MS recording is done with a cardioid mic for the Mid channel, varying the Mid mic can create some interesting effects. Try an omni mic pattern on the Mid channel for dramatically increased spaciousness and an extended low frequency response.

Experimenting with different combinations of mics can also make a difference. For the most part, both mics should be fairly similar in sound. This is particularly true when the sound source is large, like a piano or choir, because the channels are sharing panning information; otherwise the tone quality will vary across the stereo field.

For smaller sources with a narrower stereo field, like an acoustic guitar, matching the mics becomes less critical. With smaller sources, it’s easier to experiment with different, mismatched mics. For example, try a brighter sounding side mic to color the stereo image and make it more spacious.

As you can see, there’s a lot more to the MS microphone technique than meets the ear, so give it a try. Even if the technical theory behind it is a bit confusing, in practice you’ll find it to be an incredibly useful method to attain ultimate control of the stereo field in your recordings.

Daniel Keller is a musician, engineer and producer. Since 2002 he has been president and CEO of Get It In Writing, a public relations and marketing firm focused on audio and multimedia professionals and their toys. Despite being immersed in professional audio his entire adult life, he still refuses to grow up.
All Posts
PrevPreviousDanley Sound Labs At The Heart Of Upgrade Of Large High School Stadium In Virginia
NextSoundTools Releases New SuperCAT Sound Tails Interconnect CableNext
Study Hall Top Stories
Explore All Study Hall