In The Studio: Gimme Momentum

Getting better at recording and mixing music is pointless if you never actually finish anything.

Up until recently, I don’t think I could have articulated this clearly. But now that I’m aware of it, it makes so. much. sense.

I’ve talked a lot over the years about the importance of finishing projects. In a very real sense, learning how to get better at recording and mixing music is pointless if you never actually finish something, release something.

It’s a waste of time and money. Sure, there’s enjoyment in the process. It’s fun to get new equipment and learn new techniques. But be careful that you don’t become so caught up in learning over doing.

Before diving into the solution, I think we need to explore the problem for a minute first. Cool?

In my life, I discovered an interesting trend that occurred over the first several years of learning how to record music. There was an inverse correlation (I’m not a math nerd, so correct me if that’s the wrong term) between the level of knowledge and skill I had about recording and the amount of music I was producing.

If you were to put it on a chart, it would look this this: 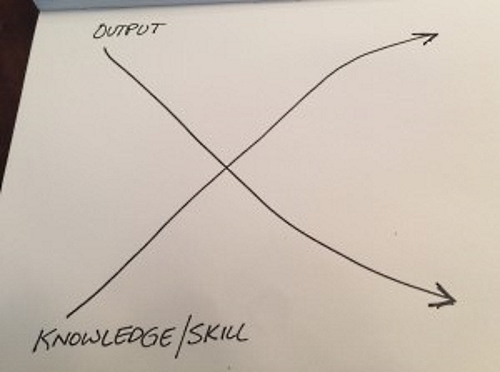 Put simply, the less I knew about audio, the more music I created. Pre-recording I was in a band, I was writing songs, I was playing my guitar non-stop.

When I discovered multi-track recording (a really basic piece of 8-track recording software), I instantly saw the creative potential and lost myself in recording anything I could think of. I didn’t have a proper mic or headphones. But I was recording nonstop.

Then I went to college. Freshman year I hadn’t learned much about audio yet, so I was still recording a bunch. I recorded an EP and an album that year.

Then I started getting into audio. I began learning the “proper” way to record music, and I didn’t release an album for another 6 years. Six. Years.

Once the veil was lifted, I realized how technically bad my first recordings were, and there was this unspoken resolution in my heart that I would never recording anything improperly again. I would learn everything I could, and I would amass the perfect collection of “proper” equipment before I dared record another note.

I wouldn’t say I have regrets about it, but there was a lot of good art to make during those years, and I didn’t make it because I was too busy learning how to make good art. Terribly ironic, isn’t it?

Is all this to say I’m against learning? That would be pretty crazy for a guy who runs a business selling tutorials to say, right? I’m a big fan of learning, to be sure. But if I had my way, everyone would learn on the job vs in the classroom.

What I mean is, knowledge about audio and music is pointless if it isn’t being tested and used. You don’t really learn anything until you’ve done it yourself. I regularly have people tell me that they’ve heard me preach about the merits of subtractive EQ for years, but they never tried it. Once they actually tried it on a mix, they were sold. They “learned” about the concept years ago, but they didn’t really LEARN it until they tried it themselves.

Momentum to the Rescue

So if education isn’t the problem, what is? A lack of momentum.

I entered college with a crapload of momentum. I had been a recording fiend. It made sense to immerse myself in recording, right? Right. But something shifted in me. The knowledge turned into a momentum killer.

To be clear, I’m not bashing college or learning AT ALL. Rather, I’m presenting myself as a cautionary tale. What happened to me could also happen to you if you’re not careful.

The name of the game here is momentum. You might expect me to say something like “starting,” but that’s not the most important part. Yes, starting is important; it’s the initial burst of energy that gets this big thing rolling in the first place.

Joe Gilder is a Nashville based engineer, musician, and producer who also provides training and advice at the Home Studio Corner.
All Posts
PrevPreviousBoth Sides Of The Kit: A Conversation With A Drummer/Audio Engineer
NextCapturing The Moment: Microphone Approaches For Live RecordingNext
Study Hall Top Stories
Explore All Study Hall