In The Studio: EQ And Compression Techniques For Vocals, Acoustic Guitar

A few simple compression and EQ techniques can help in getting all of the parts of a mix to fit nicely...

Very much like vocals, I don’t believe in EQing acoustic guitar while I’m recording it, only because I rarely know what the other elements of the mix will be.

However, there are a two very specific approaches I use to EQing an acoustic guitar depending on whether or not it’s accompanying a vocal performance or a part of a bigger mix.

In general terms, the EQ approach is more subtle in the simple guitar/vocal to preserve the fuller tone of the acoustic and more aggressive in the full-band mix to make room for other instruments while still preserving the essential elements of the acoustic’s sound.

Here are some EQ settings for a simple acoustic guitar and vocal recording:

—Removing boominess – I like to pull 1 or 2 dB at 125 Hz to remove the boominess that often accompanies miking an acoustic too close to the sound hole.
—Adding sparkle – If after removing some of the boominess, I’m still looking for more sparkle in the acoustic, I’ll boost a dB or two at 5 kHz.

Below are some EQ settings for an acoustic in a full band recording:

—Adding clarity – I’ve found that a high-pass filter at 120 Jz leaves room for the kick drum and bass guitar in a mix while allowing the acoustic to shine at the higher frequencies. Leaving in the low parts of the acoustic’s frequency will often muddy the mix and obscure the kick drum and bass.
—Still muddy? – don’t be afraid to take your high-pass filter up to 200 Hz or even 300 Hz if the guitar still isn’t cutting through the mix. It may sound terrible soloed but perfect in the mix and that’s the key.
—Adding sparkle – As above, if cutting out the low frequencies isn’t enough to get the acoustic to cut through a mix, adding 2-3 dB at 5 kHz will do a lot to bring out the strummed or finger picked strings of the acoustic. 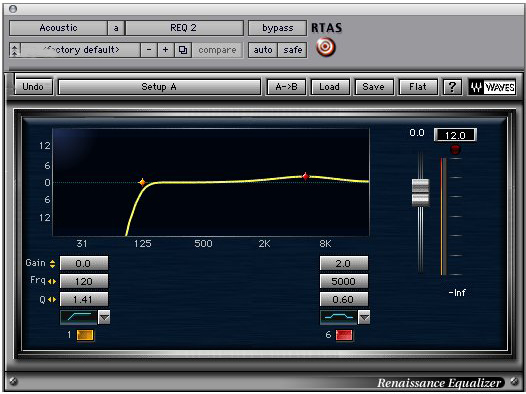 Compression and EQ are two very powerful weapons in your mix arsenal, but as with anything, overuse will do more harm than good. I think back to the words of an engineer whose work I really respect who liked to say “I’ll compress until it sucks and then back it off from there.”

In other words, knowing when to say “when” is an equally useful skill.

A final thought – as far as signal path is concerned, I tend to place compression after EQ because EQ effectively raises or lowers the volume of the track and I’ve found I get a more effective response from the compressor if I hit it with the EQed audio. I would highly recommend using the above EQ and compression settings not as an ironclad rule but rather as a jumping off point.

Every mix is different and your ears will tell you what’s working and what isn’t.

In the music business for over 20 years, Cliff Goldmacher is an engineer, producer and owner of recording studios in Nashville and New York City. A multi-instrumentalist, he has recorded, played on and produced thousands of demos for major and independent publishers, brand new songwriters and Grammy winners. The demos Cliff has recorded have ended up as major label cuts, in feature films and on television.

For more audio/sound related content and resources, go to Audiofanzine.