One of the most critical and overlooked parameters when mixing is the monitor level. Either mixing too loudly or too quietly can fool your ears to the point where you’ll end with a mix that will seem to be missing something later.

Here’s an excerpt from my book, The Audio Mixing Bootcamp, that explains a bit more about mixing levels and how to find what works best for you.

One of the greatest misconceptions about music mixers (especially the great ones) is that they mix at high volume levels. Some do, and at excruciatingly loud levels as well, but most mixers find that they get better balances that translate well to the real listening world by monitoring at conversation level (79 dB SPL) or even lower. 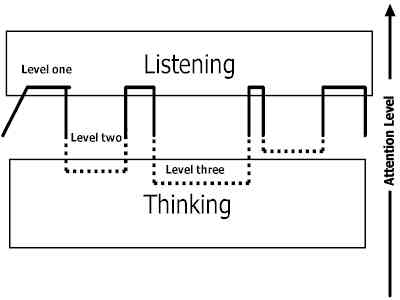 High SPL levels for long periods of time are generally not recommended for the following reasons:

1) First the obvious one, exposure to high volume levels over long periods of time my cause long-term physical damage.

2) High volume levels for long periods of time will not only cause the onset of ear fatigue, but physical fatigue as well. This means that you might effectively only be able to work six hours instead of the normal eight (or ten or twelve) that’s possible if listening at lower levels.

3) The ear has different frequency response curves at high volume levels that overcompensate on both the high and low frequencies. This means that your high volume mix will generally sound pretty limp when it’s played at softer levels.

Now this isn’t to say that all mixing should be done at the same level and everything should be played quietly. In fact, music mixers (as opposed to film mixing, which always uses one constant level) tend to work at a variety of levels; up loud for a minute to check the low end, and moderate while checking the EQ and effects.

But the final balances usually will be done quietly. Sometimes, the only way that you can check how much low-end is on a mix is to turn it up to a moderately loud level for a brief period, so don’t be afraid to do that if needed.

Just remember that keeping it up loud for long periods of time probably won’t help your mix translate to other systems too well.

Listening On Several Loudpeaker Systems
Most veteran mixers use at least a couple of monitor systems to get a feel for how everything sounds — the main system where the mixer does all of the major listening work, and an alternate system for a different perspective.

The alternate system is used simply as a balance check to make sure that one of the instruments isn’t either too loud or too soft in the mix. Also, one of the arts of mix balance is getting the kick drum and bass guitar to speak well on a small system, which is why an alternative monitor system is so important.

Read More
In The Studio: Analog Tape Recording Basics And Getting "That Sound"

The second set of monitors doesn’t have to be great. In fact, the crappier they are, the better. Even a set of ten-dollar computer speakers can do. The idea is to have a second set that will give you an idea of what things sound like in that world, since unfortunately, there are a lot more people listening on crappy monitors than good ones these days.

Bobby Owsinski is an author, producer, music industry veteran and technical consultant who has written numerous books covering all aspects of audio recording. To read more from Bobby, and to acquire copies of his outstanding books such as The Recording Engineer’s Handbook, be sure to check out his website at www.bobbyowsinski.com.
All Posts
PrevPreviousMore Than One Way: Alternatives To High-Voltage Audio Power Distribution
NextPLASA Show Postponed To 2021 With New Dates AnnouncedNext
Top Stories
Explore All Study Hall