In Profile: Passion For The Craft

Over Michelle Sabolchick Pettinato’s 25 years as a front of house engineer, she’s worked with a wide variety of artists, among them: pop icons Christina Aguilera and Gwen Stefani, 90s rock outfits Collective Soul and Goo Goo Dolls, and currently, she’s on tour with one of her favorite bands from her teenage years, Styx.

Sabolchick recalls working with a colleague, Jeff Heintz – who’s since served as a co-production manager and keyboard tech for Styx – on Stefani’s first solo tour in 2005: “On that tour, we talked about our favorite bands growing up; Styx was mine, and Journey was his. We always said, ‘You know, one day, I really want to work with them.’

Within a month of wrapping up that tour, Jeff called me and said, ‘You’re never going to believe who I’m working for’ – it was Styx.”

Step By Step
Born and raised in the small town of Ashland, PA, in the heart of the state’s coal region, Sabolchick, a self-described science geek, spent a fair bit of time taking old recording and stereo gear apart in an effort to figure out how it worked. She also loved music and studied piano for many years, but never wanted to be on stage or perform in front of people.

Consequently, early on, she felt that a career as a recording engineer was a good fit.

“Live sound hadn’t occurred to me to that point. I’d gone to tons of concerts, but never even thought you could do it for a living,” she notes. During high school, a friend introduced her to a local promoter who let her shadow him and learn the business. After graduating she applied for a university recording arts program but unfortunately, the tuition was prohibitive, so instead she opted to study at Penn State University with a major in music.

After a year, she realized the program wasn’t going to help her achieve her goal of working in audio and instead enrolled in a Recording Engineering and Studio Maintenance program at The Recording Workshop in Chillicothe, OH. Completing that helped lead to a gig at a local radio station, WMGH, selling and recording commercials, but it was only a stepping stone.

Hungry for actual pro audio work, Sabolchick hopped a bus to Nashville, bunked with a cousin for a few weeks, and knocked on pretty much every door on Music Row. She soon realized, however, given her two-line resume, that she needed more training and experience, and enrolled at Full Sail University in Winter Park, FL, where it was the first time she’d felt that others truly supported her career choice.

While she entered the business at a time when far fewer women worked in audio, Sabolchick downplays the impact being female in a largely male-dominated industry had on her long-term goals. However, she adds, there were times when people misunderstood her role.

As an example, she cites returning to Pennsylvania, where she interned at a small sound company near Philadelphia: “Me and another guy would go out and do bar bands, set up the gear, sound check, then leave and have dinner. When we came back for the show the bouncers would try to charge me cover, thinking I was the guy’s girlfriend.”

Throughout her career Sabolchick has been driven to go where the work was. Early on, she regularly traveled back and forth between Pennsylvania and Florida to make ends meet, working as a stagehand, running lights, mixing, doing whatever was necessary. “I worked at any job, anywhere, until I reached the point where I wasn’t going to learn more or progress,” she says.

A big break came about by being in the right place at the right time – on a day she’d intended to take a train to Florida to work, Amtrak went on strike. That afternoon, a friend called to ask if she’d take over his gig doing front of house for Spin Doctors, and roughly a month after she signed on, the band broke nationally. 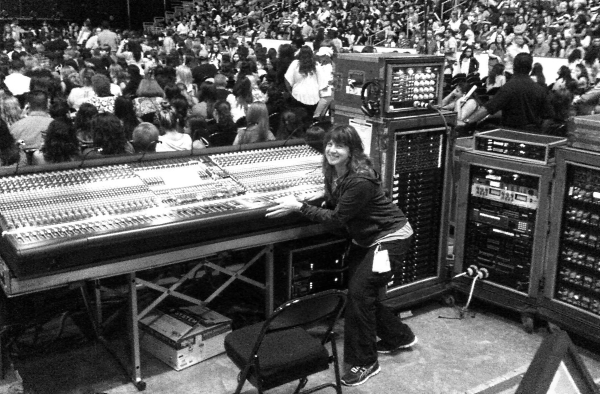 Sabolchick in an analog FOH world on the road with Big Time Rush in 2012.

During that first tour, Sabolchick also met her husband, Jim Pettinato, who had signed on as lighting designer and production manager. (“We grew up 90 miles apart, but never met until Spin Doctors, and we just clicked.”) They were engaged for five years before getting married, she notes, laughing, “We just couldn’t get our schedules together,” adding that balancing real life with being on tour regularly isn’t always easy: “But this is our life. We both get that and deal with it.”