Atomic Professional Audio’s growth has always been fueled by their habit of expanding the services they offer, and their inventory, in anticipation of the evolving needs of their clients.

That ethic comes from the top down, from co-founder Kevin Margolin.

And it isn’t terribly different to the way he sizes up potential gigs with a critical eye ahead of time, in an effort to make sure every show run as smoothly as possible.

“When I look at a site – you know, other people are looking at how beautiful it is and how many people they can fit there – I’m looking at parking, drainage and roads,” Margolin says.

Call it a “glass half empty” outlook, if you want, but Margolin isn’t pessimistic, he just wants to be prepared if the metaphorical glass is suddenly in danger of being full to the brim with rain or snow. The Rutland, VT-based company often has to cope with less than ideal weather, and more than ever this past year.

“All summer I was a weatherman. If it’s sunny and beautiful, it’s a pretty easy gig to do,” says Margolin. When it goes the other way, however, “We do what we have to. If a truck gets stuck, yes, we’re ready. We’ll have a bulldozer. We’ll have a plywood road. The gigs where you’re hanging out and loading out in the mud and rain – those aren’t as much fun, obviously – but at the end of the day, to me, they’re rewarding. And because we do so many of them, we’re really good at them from an audio and production perspective.”

In The DNA
Founded in 1994, Atomic has grown from a small audio provider to one of New England’s premier full service production houses, serving high profile touring artists, corporate clients, colleges and regional festivals, and offering everything from event management, audio, video, lighting, backline and staging services, to system design and integration.

Among those who’ve been instrumental in that growth, Margolin points to his wife, co-owner and company president Kristin Margolin, as well as a “few guys” who have been with him since the beginning – Dave Serrani, Mark Trepanier, Keith “Buzzy” Buzzell – and some for many years, Tim Rollet, George Perone, Matty Serrani, Mike Alcorn, Matt Munger, Dan Ostroff, Billy Yager, Vic Hess, Dennis “DJ” Johnson and Evan McElhinney.

Born in Bridgeport, CT, and raised in Poughkeepsie, NY, Margolin began dabbling in sound at age 12. Through his teenage years, he worked both on and off stage with various bands. “I played guitar, but I did it pretty poorly, I’m sure,” he says, laughing. “My father had a sound company, SJ Margolin Sound, so it always seemed the audio thing was a part of my DNA.” 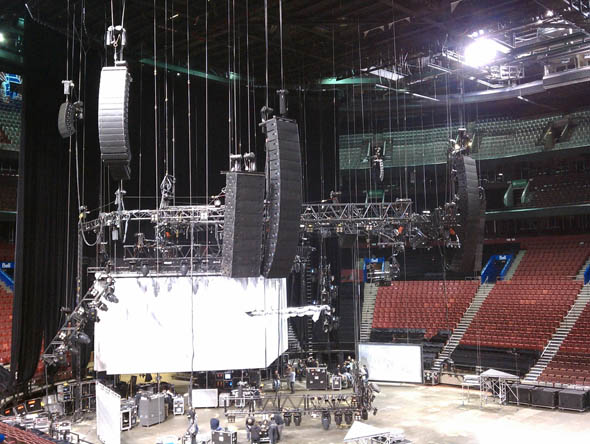 The Adamson line array set deployed by Atomic for the Linkin Park tour a couple of years ago. (click to enlarge)

As it turned out, he preferred audio, but initially worked as an electrician after high school. When a friend, whose band was busily mining the regional club scene for fun and profit, asked him to do their sound, Margolin initially refused the gig. “I had a job. I couldn’t just take off,’ but my friend said, ‘this is so much fun. You can’t imagine how much fun this is.’ So, six months later, when they got into it with their soundman, he was like, ‘C’mon what do I have to do to give you a job.’ I said, ‘just ask again.’”

Read More
Beyond The Norm: Problem-Solving Mic Choices And Approaches

For the next year, Margolin gigged between four and six nights a week, hauling his own system and adding gear as necessary. Eventually he tired of the road, however, but was unsure what to do next. For a time he worked with his father’s company, but relocated to Rutland, VT in 1985 to start his own sound company with another engineer. The company did well for several years, Margolin says, but in time the demand for their main clients – club oriented cover bands – dwindled.

In 1989, a friend who worked for NJ-based Metropolitan Entertainment asked Margolin to be a promoter rep at a show. As more shows came to the region, he took on promoter rep and site manager duties, and within six months found himself working everything from theatre gigs to large-scale outdoor shows like the Grateful Dead, coordinating local crew, security, catering, sound and lights and everything else.