In Profile: Deb Hutchins, Mix Engineer &  A Lot Of Hats

“To me the greatest compliment a band can pay to you is to rehire you,” says Deb Hutchins.

“I’ve been fortunate to have a small, core number of bands that I’ve continually returned to and keep working with over and over again.”

“It becomes like a family on the road, and then it becomes fun. That’s what touring should be.”

Born in the UK, Hutchins’ family moved to Rexdale, Ontario in the early 1980s, when she was eight years old.

There she connected with music in a big way, and with the production side of the concert industry early on, serving as VP of Entertainment on the Student Council at Brampton (Ontario’s) Mayfield Secondary School.

But it was Hutchins’ earliest concert experiences that really set the hook in terms of her interest in production. “As a teenager I’d go to concerts.

During changeover my friends would go out and get popcorn and drinks and I’d sit there, mesmerized, watching the crew get the stage ready for the headliner. I just thought that would be the most amazing job.”

Beyond feeding her growing passion for sound, those shows sparked a realization that it was the crew who made the show happen for the band, and a fascination with the technical aspects of the gig.

“Going to see shows at the CNE (Canadian National Exhibition) Grandstand, I remember the ushers trying to clear out the audience and I was begging them to let me stay a few extra minutes so I could watch the start of teardown.” 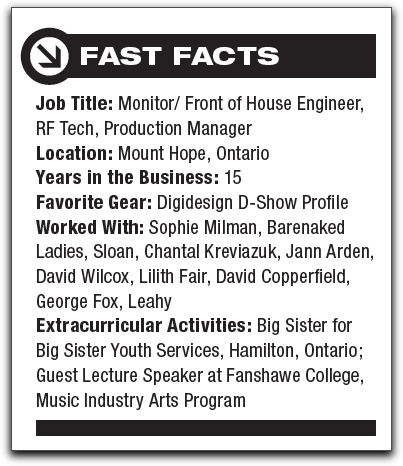 After high school, Hutchins attended Fanshawe College (London, Ontario), taking the Musical Industry Arts program with a focus in Recording Engineering. Even then, she knew the studio wasn’t for her.

“I was doing live sound, and working for Westbury National Show Systems, packing trucks for them when I was 18. I was volunteering at the Mariposa Folk Festival.”

It was the energy of live shows – the anticipation, the excitement and the travel – that drew her to the road.

Following a stint as a Talent Buyer at McMaster University (Hamilton, Ontario), Hutchins hit the road as soon as possible, and hasn’t looked back since, making a career of working almost exclusively with Canadian acts; from 1990s alt-rockers Sloan and perennial Canadian favorites like David Wilcox, Chantal Kreviazuk and Jann Arden, to international successes like Barenaked Ladies.

“I toured as the only girl in a van full of guys for many, many years.” Initially, that was a challenge, she explains.

“You come up against stereotypes – people who assume you’re involved with one of the band, or that you’re somebody’s sister or daughter, rather than a professional technician hired based on your skill set.”

All part of the learning curve, she says, and one she coped with by just digging in and letting her work speak for itself.