In Need Of The “Big Hammer”

Many regional sound companies today have made the strategic decision to invest in smaller mid-size line arrays as their main speaker systems of choice (the “A” rig), as oppose to making the huge investment of owning a large-scale “big box” line array system.

One of the reasons for this is a smaller box system is much easier to “scale up” for larger events, than it is for a large box system to “scale down” for smaller events.

And we all know how painful it is to see that large scale system sitting in the warehouse waiting for that next big festival to put it out on (a few times per year), while most of the daily “bread & butter” jobs are utilizing the “B” and “C” rigs from our inventory.

However, not owning a “Big Hammer” rig in the tool box does present its own problems when trying to be the “go to” company in a given region. Cross-rentals are not always an option, and in some cases not desirable, even when readily available due to potential “competitor poaching” of clients.

So how can a company compete when the investments made don’t include the “big hammer” rig? This story illustrates one possible solution.

Starway Productions from Southern California is a moderate sized “full production” house (Audio; Lighting; Video; Staging, etc) that currently does not own a big-box system in their inventory.

Their client base includes several large casino resorts, municipal and corporate clients and several concert and festival promoters (just to name a few). They decided to make their main loudspeaker system of choice the QSC WideLine 10 system (for most of the reasons stated above).

And they have found over the past several years that they can easily satisfy over 80 percent of their clients without having to own a big-box rig. For those occasional artists whose rider demands an SPL capability exceeding 115 dBA at mix position, Starway would typically cross-rent a large box system from one of the big touring companies in the region. This got them through the event, but often cut deeply in to their profit margin.

This past summer (2011), Starway completely designed and produced an outdoor “Summer Concert Series” for Pechanga Resort & Casino in Temecula, CA. – including the temporary venue, large stage, and all the technical production.

Many world-class artists were booked for the season, most of which representing a wide range of music genre, with a few of them requiring a “Big Hammer” system. Austin Hill, (Starway’s senior audio engineer) contacted me to see if we could come up with a system design utilizing their QSC inventory that could meet the added (SPL) demand of those few shows.

We decided to create a large “5-way” system for the main left-right hangs, which included 20 flown WideLine 10 (WL10) enclosures, 8 flown WL218-sw dual 18” enclosures as “LF” devices, and 8 x stacked WL218-sw dual-18-inch enclosures as the aux-fed sub-woofers on each side of the stage.

In addition to the main L-R system we also hung a 10 box WideLine 10 center array as a “vocal only” system to enhance the vocal clarity and point-source imaging throughout the venue. For the crowd of people leaning on the barricade down front, we placed 6 self-powered QSC K8 speakers spaced evenly across the lip of the stage. 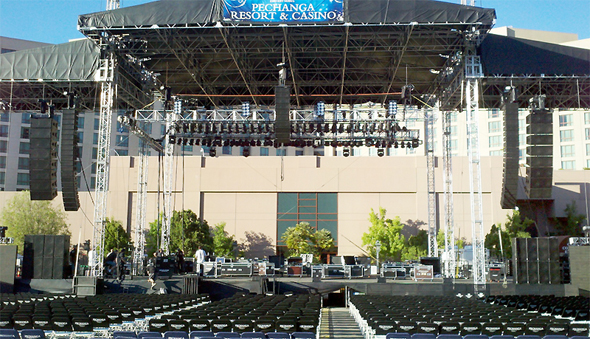 In order to make each of the flown Left and Right systems behave as one coherent array, we changed a number of parameters in each system’s processing & deployment methodology. 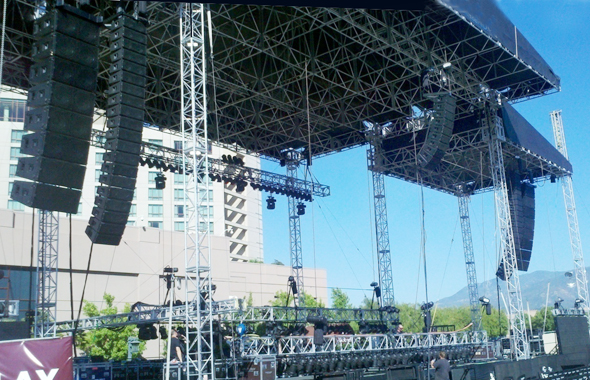 Because the venue was only 175 feet front to back, I was able to keep the array shape to a very modest bend and maximize the potential sound power of the array using a combination “arcuate” into a slight “spiral” array shape.

Next, crossover points in the WideLine 10 array were changed to allow for the added LF array. WL10 normally utilizes a frequency shading topology between its dual 10-inch woofers, wherein we allow both woofers to go all the way down to its bottom knee (usually 80 Hz when used with subwoofers).

At 130 Hz, the LF assist woofer begins to roll out at a gradual 6 dB per octave slope so in the upper mid range frequencies, only one of the 10-inch woofers is actually operating – eliminating off-axis time smear and nulling (cancellations) in the MF region. This gives WL10 the bass response of a much larger box (down to 52 Hz), while keeping the footprint of the box relatively small.

However, the caveat to this topology is the MF device becomes the hardest working device in the enclosure, because it is doing double duty – MF and LF. So the idea was to take some of the strain off the MF woofer and let the LF array take on more of that low and low-mid duty. 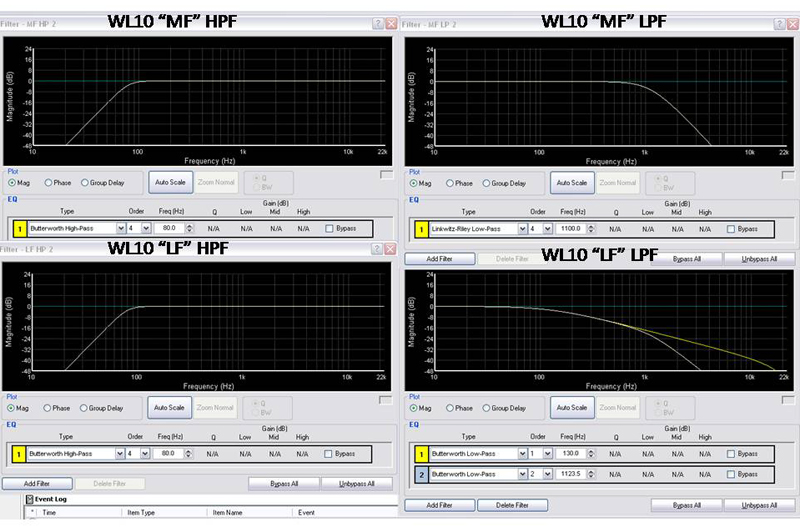 Then, we programmed the dual 18-inch LF arrays to operate from 40 Hz to 150 Hz acoustically using an 8th order Bessel low-pass filter at 110 Hz (See composite below).

Taking time arrival measurements dead center of the audience area (85 feet from stage) of each band-pass (left and right separately) we time aligned each within .02 mS of each other (including the center array, lip fills and ground-stacked subs). We allowed the center array to be 2mS ahead of the main left-right system just to put the vocals a little more “in your face.” This technique worked very well in the show as the vocals really stood out on top and were very clean. 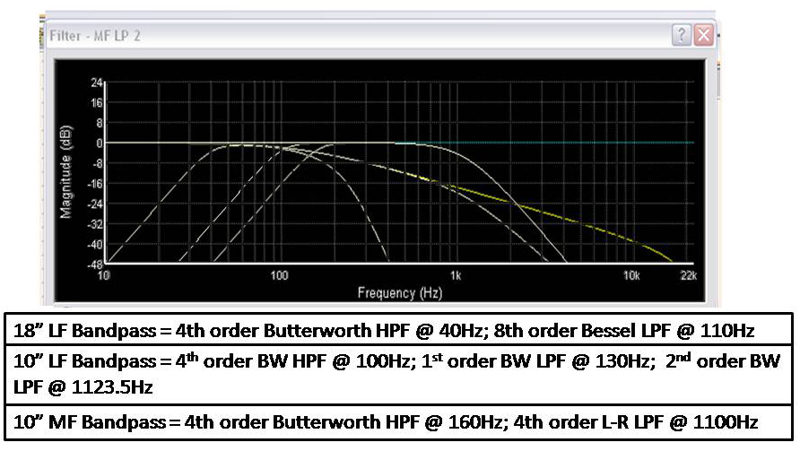 The net result in this experimental pairing of these two separate arrays (into one 4-way system) was a significant increase in midrange clarity and headroom; increased bass extension and impact of the flown system before subwoofer use; and increased overall sensitivity and system output (total SPL).

And having that much bass extension in the main arrays allowed us to use the ground-stacked dual 18-inch subwoofers as an aux-fed sub harmonic effect for those sources needing to go that deep. We limited the subs acoustical band-pass to only work from 28 Hz to 50 Hz, resulting in the low-end being very big & very tight! 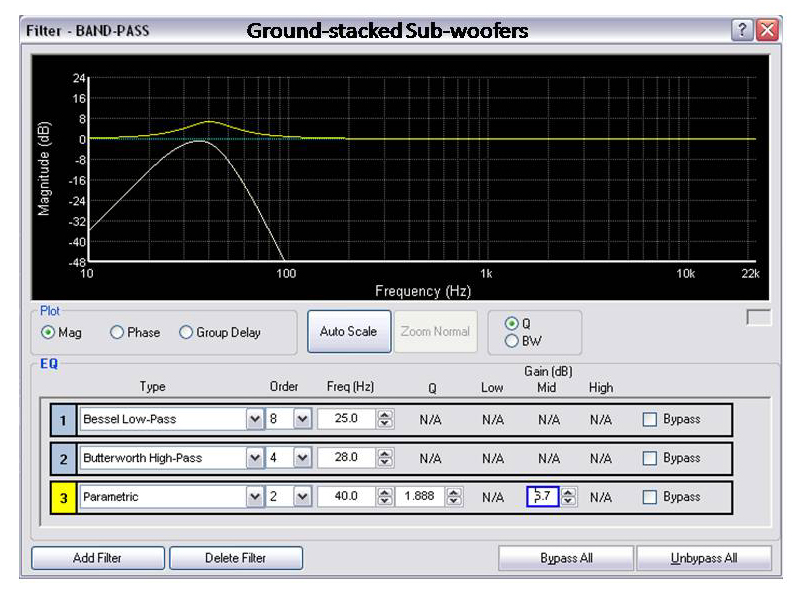 In summary, what we created was a big-box line array using smaller modular components. Some may say that we used an enormous amount of cabinets for a venue that size. However, this was done to meet an SPL requirement for only one or two acts for the entire season.

When comparing a small box system to a large box system, it’s not the number of cabinets but rather the height of the array that determines its potential SPL output. The 20-box array we hung measured 16.8 feet tall, which is roughly the equivalent of a 10-box large format line array (i.e. – V-DOSC, VerTec 4889). That’s actually not that large of a system for a venue this size (4,500 seats) needing that amount of SPL and vertical coverage. 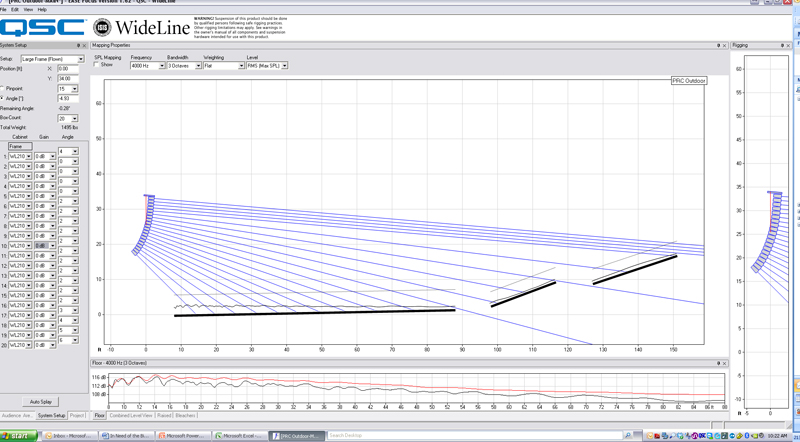 The cool take-away to this experiment for me was that this technique is scalable to smaller venues and smaller box counts – It’s making one “big hammer” out of a few smaller ones… Happy mixing out there.