In Focus: Taming The Beast

Strategies for working -- and succeeding -- in acoustically difficult spaces

Further Ideas
Column loudspeakers have made a big comeback in recent years. Their narrow vertical dispersion, coupled with a skinny form factor that can blend in aesthetically, has made them a hit with both install companies and live event professionals.

Unlike the columns of yesteryear, today’s models offer a wide frequency response and can get quite loud.

The décor and “look” of a show can take precedence over audio quality, and many event planners don’t want “big ugly speakers” to be located where they need to be for coverage. Modern columns can provide a winning (and elegant) solution. Some models utilize small full-range drivers rather than woofers and compression drivers on horns, and they can sound very smooth with vocals and speeches because there’s no crossover in the vocal region.

Stereo may be great when the audience is located between left and right loudspeakers, but a distributed mono approach may work better for a challenging space, particularly if a room is oddly shaped or the audience is in two (or more) separate areas.

The first few seating rows at center stage might be the best place to see a performance but not necessarily to hear it. In this region, loudspeakers can be deployed for zoned fill (a.k.a., front fill). Any size of full-range cabinets can be used, but slim designs with rotatable horns, laid on their side, are optimum for this application. The object is to use low-profile loudspeakers no taller than the stage wedges to leave sightlines clean. 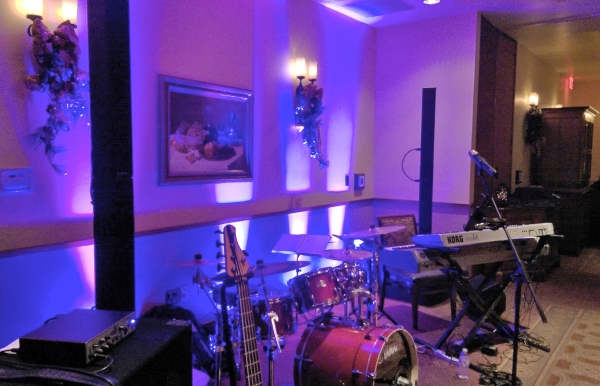 Underbalcony seats present another problem area to cover. Many theaters have built-in underbalcony fill loudspeakers that can be tied into, but if that’s not available, small loudspeakers on stands can be placed in the outside aisles, pointed at the seating. Also, sometimes compact loudspeakers can be suspended from the balcony above to cover the center area or the entire under balcony.

Some events may not require more than a single loudspeaker location. If it can be covered with one loudspeaker, it should be. Adding loudspeakers generates interference between them, as well as being extra equipment that has to be hauled, loaded, set up and taken down. Sometimes just a second loudspeaker in a small, highly reflective space might generate enough reflections to compromise intelligibility.

The same goes with subwoofers – positioned on each side of a stage, they can create a “power alley” in the middle where their output couples. Placing a pair of subs on one side or next to each other in front of the stage will still produce plenty of low end but without the power alley effect. Further, a cardioid or steered subwoofer array can help keep low end from spilling on stage and reflecting off walls. Placing a single cardioid array on one side of may be all that’s needed.

As noted at the outset, the best way to deal with a tough acoustical environment is to perform a walk-through of the site in advance. This leads to a far better understanding of the unique challenges, which in turn will result in a system and overall sonic presentation that meets client and audience expectations.

Craig has worked in a wide range of roles in professional audio for more than 30 years in a dynamic career that encompasses touring, theater, live televised broadcast events and even concerts at the White House. Currently he owns and operates Tech Works, a regional production company that focuses on corporate events based in Reno.
All Posts
PrevPreviousSPL Systems Overhauls Amplifier Racks With Powersoft
NextJim Lauderdale Records New Album With Mojave AudioNext
Top Stories
Explore All Study Hall