In Focus: Taming The Beast

Strategies for working -- and succeeding -- in acoustically difficult spaces

Of course, using in-ear monitors instead of wedges can reduce stage volume immensely.

Not all performers are comfortable with in-ear monitors, so I’ve developed some approaches to help change them over.

Most people use ear buds with their phones/personal music players, so they’re already familiar with the sound and feel of IEM. While custom-molded ear pieces provide the best fit, sound and isolation, standard phone ear buds can work.

If a performer doesn’t have his/her own ear buds or doesn’t want to wear hard plastic earpieces, I offer a set of mine that use replaceable foam tips.

In addition, we set up a few wedges and/or side fills with a basic mix of kick, piano, guitar and vocal, so if they decide to pull out their “ears,” they’ll still have monitors.

Adding the input of an open mic pointed at the crowd to a mix can lessen the sense of isolation felt by performers wearing IEM. It’s also a good idea to make sure everybody is happy at sound check, even if it takes an extra song or two.

The additional time spent can make all the difference.

Another way to eliminate monitor bleed is to place the main loudspeakers behind the band so they also serve as monitors. This can work well with performers who do not have a loud stage volume or with artists used to working with just a few monitors. Locate the loudspeakers so they won’t generate feedback yet close enough for monitoring.

Unless the audience is located a decent distance from the stage, reinforcement is the name of the game when dealing with a loud stage volume. Only put instruments into the PA that are not heard well in the listening area. If the guitar player is loud enough for the room, simply bring the band up around the guitar. Same with some drummers, as many tend to be loud enough in small rooms. 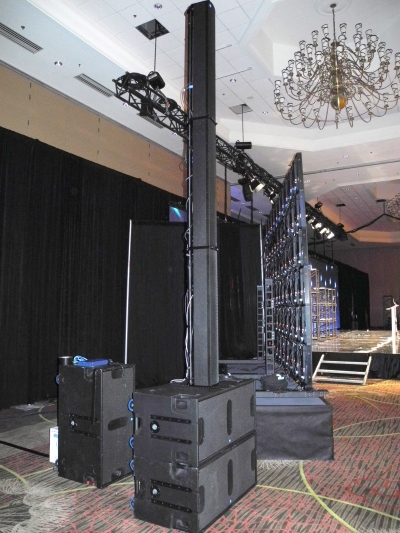 Digitally steered approaches, such as this Renkus-Heinz IC Live system, can be quite helpful in providing extra control in reverberant spaces.

Alternatives To The Norm
For highly reflective rooms, the first priority is keeping the sound focused on the audience as much as possible while avoiding the walls and ceiling. This can be accomplished in a few ways. For large events, one of our primary solutions is a digitally steered PA that can be configured to direct its output, and without having to tilt or aim the cabinets. Asymmetrical coverage patterns can be used to further tailor coverage.

Of course, not every situation has the budget or need for a digitally steered system. For smaller shows in highly reflective rooms, loudspeaker tilting can be employed. Just as in my example earlier, use tall stands to get the loudspeakers higher in the air and then tilt the cabinets down to point at the audience. This helps eliminate reflections off the rear wall in comparison to loudspeakers deployed in a traditional upright position on a shorter stand.

Yoke brackets or stand tilters can be used, and some loudspeakers even have dual pole sockets, one for straight ahead mounting and one with a downward tilt. Make sure the stand is sturdy enough to hold a tilted loudspeaker as the center of gravity of the loudspeaker may not be directly over the pole. Sandbags can be placed on the stand base to provide additional ballast. 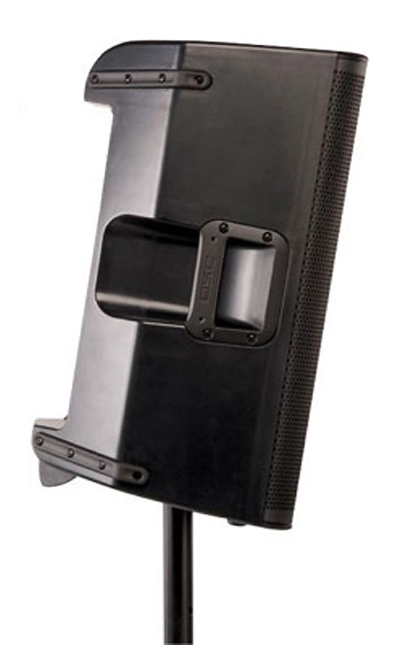 For loudspeakers stacked on top of subs, “Acoustic Aiming Devices” (AADs, a.k.a., small blocks of wood painted black) can be used to tilt the cabinets downward toward the audience. Make sure the stack is secured with straps. AADs can also help tilt cabinets upward toward a balcony or to position floor wedges at a better angle.

Sometimes a room is so live and/or oddly shaped that the best thing to do is add loudspeakers on delay to supplement the main PA. This way, coverage is extended and clarity is often enhanced while keeping overall levels down. It’s common at corporate events to utilize delay loudspeakers even in medium-sized breakout rooms so it won’t be too loud in the front rows of the audience. Delays also reduce chances of feedback because the mains – located near the stage – are at a lower volume.

Another technique often used at corporate events with mostly speech programming is to roll off the lows below 150 Hz and the highs at 9 kHz to reduce the chance for feedback outside the human speech range (loosely 200 Hz – 8 kHz). If music is to be played through the same system, the speech channels can be routed through a submix to be band-passed.

Craig has worked in a wide range of roles in professional audio for more than 30 years in a dynamic career that encompasses touring, theater, live televised broadcast events and even concerts at the White House. Currently he owns and operates Tech Works, a regional production company that focuses on corporate events based in Reno.
All Posts
PrevPreviousSPL Systems Overhauls Amplifier Racks With Powersoft
NextJim Lauderdale Records New Album With Mojave AudioNext
Top Stories
Explore All Study Hall