In Focus: A Variety Of Paths

Dynamic microphones are the most popular for instrument amplifiers because they’re rugged, and many models are designed to handle high SPL.

The venerable Shure SM57 is still a valid (and popular) choice for guitar amps but many modern models have gained ground, including the Audio-Technica Pro25ax, Shure BETA 57 and 56, Audix i5 and f5, Blue encore 100i, and AKG D40. Larger diaphragm models such as the Sennheiser MD421 also remain a favorite.

Side address dynamics made their debut years ago, and work great on amps. The mic design has the front of the diaphragm facing 90 degrees in relation to the body. The Sennheiser e609 is a popular side address model for amps, as is the CAD Audio D80. A variation of side address models are units with a head that swivels so they can be used in front or side address configurations.

Ribbon mics were once thought of only for studio applications, but in 2001 Aerosmith was looking for a way to replicate its studio guitar sounds live in concert. An engineer recommended using Royer Labs 121 studio mics, where the figure-8 polar pattern would help control stage bleed. Aerosmith guitarist Joe Perry already liked the sound of ribbons in the studio, and it went from there. Today models like the Royer R-121 LIVE and R-122 LIVE can be seen in front of guitar cabinets on many stages. 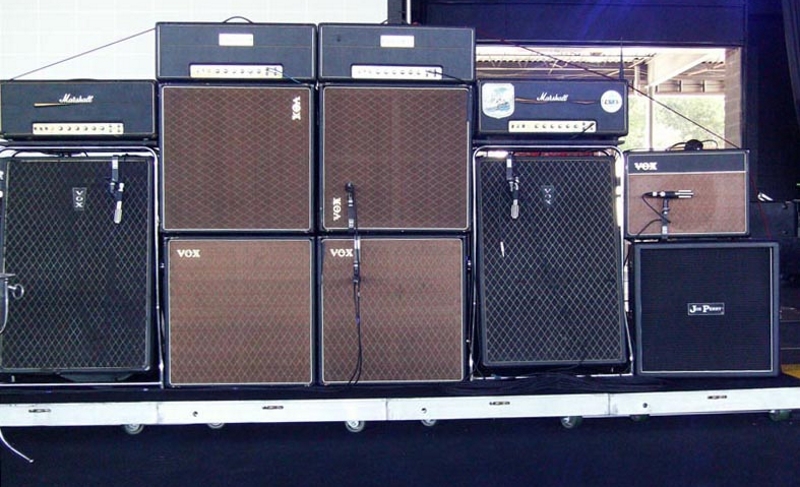 Another trend lately is using side address studio-style large-diaphragm condenser designs on guitar amps, with the thought being that condensers respond a bit quicker while offering an expanded high-end frequency range. A few months ago I worked a show with an MXL MCA SP1 on a guitar amp and it sounded quite nice.

No matter the type of mic, placement and EQ are critical to getting the desired sound. On most gigs, the guitar amp is one of the loudest things on stage so stray sounds bleeding into its mic is not really an issue. That said, bleed into any stage mic should always be taken into consideration.

I normally mike guitar cabinets from the front, placing a dynamic about 2 inches away from the speaker cone and about halfway between the cone’s center and edge and center.

Amps may contain one, two or four speakers, and there may be more than one cabinet connected to the “head” where the electronics and amplification reside. On multiple speakers and cabinets, my approach is to mike one cone unless the amp is a stereo amp like a Roland JC120. In those cases, I place a mic on each speaker to pick up the stereo effect.

Usually, moving a mic closer to the center of the speaker results in a brighter sound. And on cabinets with a speaker port, I position the mic at the side of a cone and away from the port to avoid picking up any port sounds. 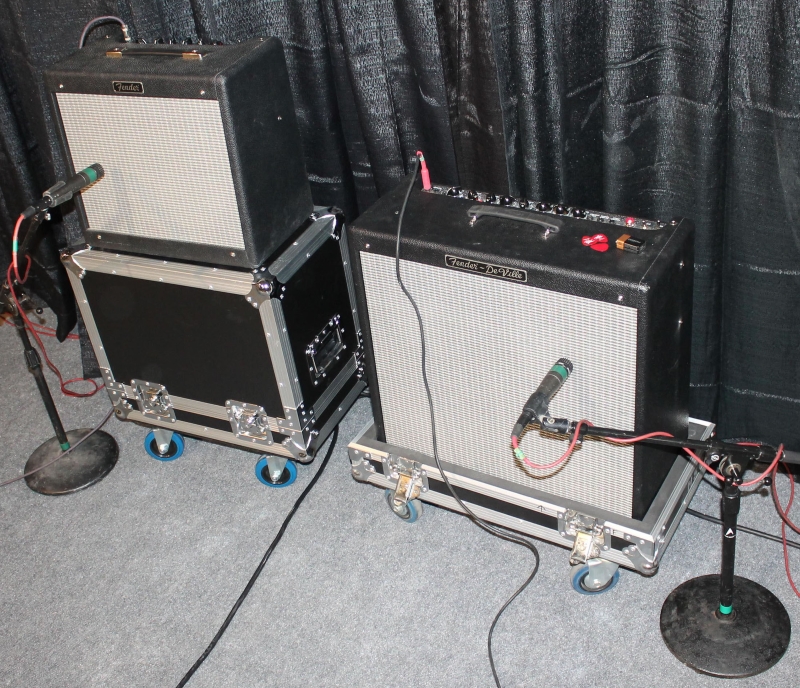 Before addressing EQ, I normally roll off everything below 70 Hz and above 16 kHz. With multiple guitar players (and therefore amps), each should be EQ’d a bit differently so that each can stand out and also have a place to “sit” in the mix. With a player who uses heavy distortion, it can help to cut more of the low end in the 70 to 150 Hz region so there is room for the kick and bass guitar in the mix.

More than few times, I’ve placed a mic at the rear of an open back cabinet. Once it was because the stage was so small that a stand and mic in front of the cabinet was in the way. In a couple of other instances, show directors didn’t want to see “messy mics” on the stage and/or in their video shots. One time the guitar player brought out an amp that had a metal grill that buzzed, so placing a mic at the rear of the open back was a matter of survival. When miking an open back cabinet from the rear, be sure flip the polarity switch (called “phase” on some consoles).

It’s also a good idea to carry some “shorty” boom stands. The smaller size is perfect for amps that are placed on the stage deck, especially small combo amps. Another mounting option that works great is called an “amp clamp.”

Available in many types and models, they all do the same thing: grip a speaker cabinet or combo amp while positioning a mic in front of the amp. The Audix CabGrabber (shown in top image) is a great example of an amp clamp. Many manufactures also make inexpensive Z-shaped bars that can slip through a guitar amp’s handle or be placed under the speaker cabinet to position a mic without the need for a stand.