Improve The Live Worship Sound Mix With These Tips & Techniques

Running sound for worship services can be tough. You might not have a lot of practical experience. Maybe the entire crew is made up of eager but unschooled volunteers. The sound system itself could be showing signs of age or neglect.

Still, there you are, serving the church and hoping nothing goes wrong on Sunday. Sound familiar?

Things can either soar or crash at the mixing board. Is the low end missing? Do the vocals and instruments lack clarity? Are all of the available frequencies being filled? These questions evoke common symptoms of a mix in need of divine intervention. With that in mind, here are some helpful tips I’ve discovered in more than 45 years of live mixing.

Many sound techs forget to listen to what each instrument and voice really sounds like. If all you ever hear is the sound of the piano or acoustic guitar though a microphone in the system, you might be missing important elements of its sound.

To help solve the problem, during rehearsal ask performers to play their instruments or sing as you listen up close for the sonic qualities, using your own ears and not through the system. Don’t be afraid to ask them to play scales, play a few measures of the songs they’re likely to perform, or sing solo and harmony parts.

While you’re at it, find out if they prefer a particular mic. You’ll probably learn something that works for both of you. Communicating with the praise team is an important part of being on the sound crew, so don’t be afraid to ask questions. They’ll appreciate the opportunity to provide some input.

Another helpful technique that works great is acquiring quality headphones (Shure SRH440 headphones are an affordable option, and there are several others.), and using them to listen as you solo each instrument and voice in the mix.

What does the kick drum really sound like by itself? How about the piano? Solo the vocalists and listen to how they contribute to the harmony of a song.

After a while, you’ll be able to pick out the individual instruments in the room mix without headphones or solo buttons. What you’re doing is training your ears (and brain) to pick out the sound of the hi-hat or snare or piano (or whatever) and adjust the mix in real time.

Every instrument and voice has both low and high frequency limits. That is, there’s a bass note that’s as low as each singer or instrument can produce, and there’s a top note plus harmonics that are as high as they can produce. Knowing these frequency limits is very important to understanding how to equalize and mix them together.

There are a number of charts that indicate the frequency ranges of each instruments/voices that can help in understanding how to equalize them. Figure 1 is a chart I built when I was mixing symphonies and needed to describe the bandwidths of each instrument for the conductor. 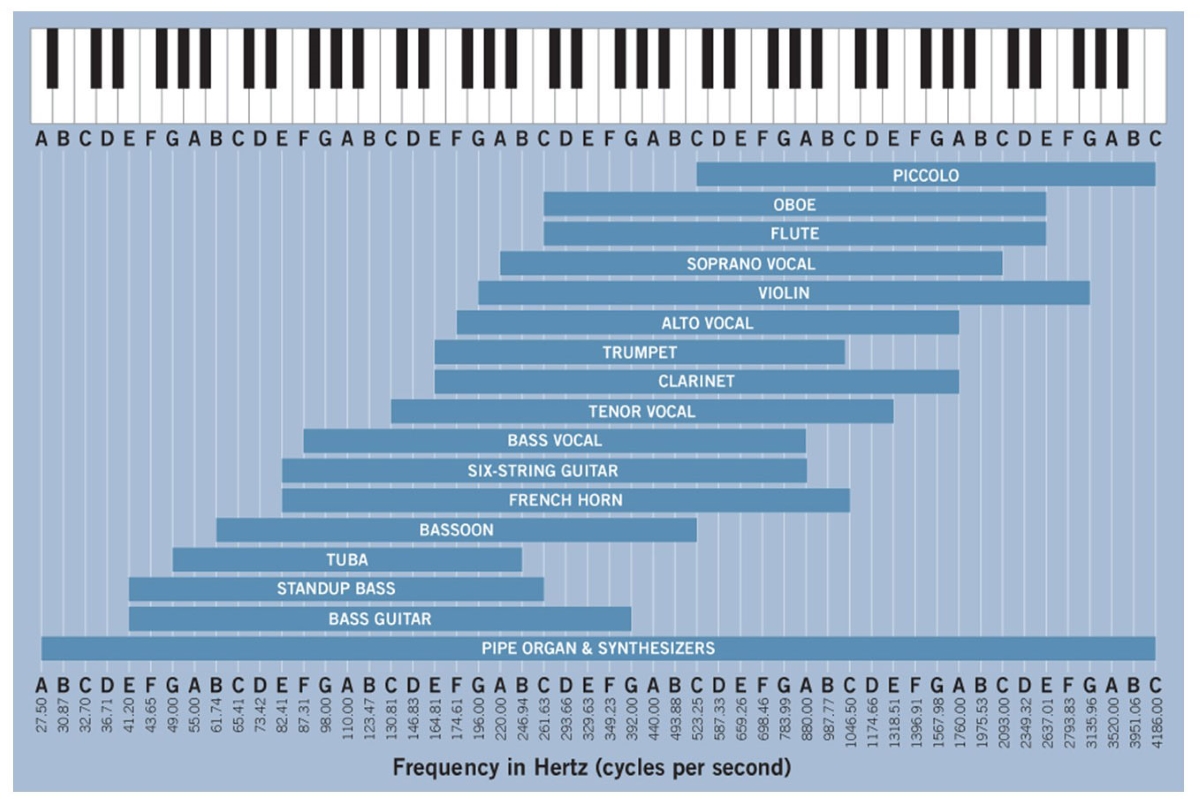 Studying the chart provides guidelines as to what can be done with each instrument.

Read More
The Mental Side Of Mixing: The Benefits Of Exposing Our Minds To A Vast Library Of Sounds

For instance, the lowest note a piccolo can play is 523 Hz. This tells us two things:

1) Trying to add bass to a piccolo by turning up the 100 Hz bass control on your channel strip just won’t work. There’s no bass there to begin with, so there’s nothing for you to boost. And…

2) Any bass that comes into the piccolo mic channel certainly isn’t piccolo. It’s coming from something else like the bass guitar or percussion section and should probably be filtered out.
This is a concept I call frequency bracketing, and it’s key to a successful mix.

On the chart, we can see that male vocalists really can’t sing lower than 80 Hz, so that’s when to apply the high-pass (same as the low-cut) filter at 80 Hz or so. If there’s a variable low-cut filter on your particular mixer/console, adjust it to be just below the lowest frequency an instrument can produce.

For example, set the low-cut filter on a piccolo to 400 Hz, or the low-cut on a violin to around 150 Hz since it can’t make much sound below 190 Hz or so. Start all male voices with a low-cut filter around 80 Hz and female voices at 140 Hz. Just be sure to listen to how chopping off the bottom of the spectrum sounds for each instrument.

Similarly, there’s a maximum high frequency that each instrument can produce, including its harmonics. If the console has a variable high-cut filter, set it just above the highest harmonics you want to hear. For example, there’s not much sonic energy above 8 kHz or so for most kick drums, so I generally set the high-cut filter on that channel to 10 kHz. Use headphones and the solo or PFL button in this process.

Other frequency brackets that tend to be key in a mix include:

Electric Guitar. The low side of the spectrum bracket should be around 80 Hz, with the high side around 8 to 10 kHz. And electric guitars are not like acoustics where we want those really high frequencies because the guitar amplifier is likely already generating a ton of high harmonics already that we really want to get rid of.

Drum Overhead Mics. If it’s doing a 3-mic configuration (stereo overhead mics plus a kick mic) then they need to pick up all the lower frequencies of the toms and snare in addition to the cymbals. However, if there are spot mics on the toms and snare, then the overheads can ignore most of those lower frequencies. I generally set the low end of the bracket to 200 Hz or so and the high end up to 20 kHz.

Piano. If it’s solo, the piano should likely be set at a 30 Hz to 15 kHz bracket. However, if it’s playing in tandem with an electric bass, then we don’t want the piano’s left hand (lower notes) to get in the way of the Fender P-Bass bottom end. So instead of asking the pianist to change his/her playing style, simply apply an 80 Hz low-cut and now the piano and bass fit together.

Mike Sokol does sound system design and training for JMS Productions, his consulting company in Western Maryland. Visit www.livesoundadvice.com for his educational articles and videos, and email him at [email protected] with comments and suggestions.
All Posts
Top Stories
Explore All Study Hall