Opened in 1998, Benaroya Hall in Seattle hosts one of the last concert halls—the S. Mark Taper Foundation Auditorium—to be built in the U.S. that was entirely devoted to the acoustic delights of a full orchestra; as such it has in recent years fallen foul of the irresistible movement towards multipurpose concert venues. As Mark Turpin from acoustic consultants Jaffe Holden (Norwalk, CT) points out, “You can’t build concert halls like that anymore; it’s just not financially viable.”

The nub of the problem is when sound reinforcement becomes a necessity. “In Benaroya Hall there were two or three issues,” continues Turpin. “Perhaps the most important consideration was that visiting productions could not easily, nor very successfully, fly a touring rig in the hall. So whatever the final solution, an installed system needed to be rider friendly.”

A proposal to rectify the situation in the rectangular, multi-level 2,479-seat auditorium had been made by Benaroya Hall’s resident audio manager. “Our original brief from the hall’s management was to review this proposal,” explains Turpin. “We found it acceptable technically, generally everything in it was fine, but we did think that it was in the hall’s best interest to open it to more than one manufacturer.”

Giving proper consideration to products from multiple manufacturers is not to be rushed; by the time Jaffe Holden was charged with bringing a variety of bidders on board, Mark Anderson had taken over the role of audio manager, just in time for listening tests to establish a number of technically acceptable system solutions.

Listening Evaluations
It proved to be an opportune time for Anderson to take that role; Jaffe Holden’s approach to this process was instructive. “For the listening tests we always try not to play ‘king of the hill’ with the various systems,” Turpin notes. “We encourage our clients to determine for themselves whether a system is acceptable or unacceptable. 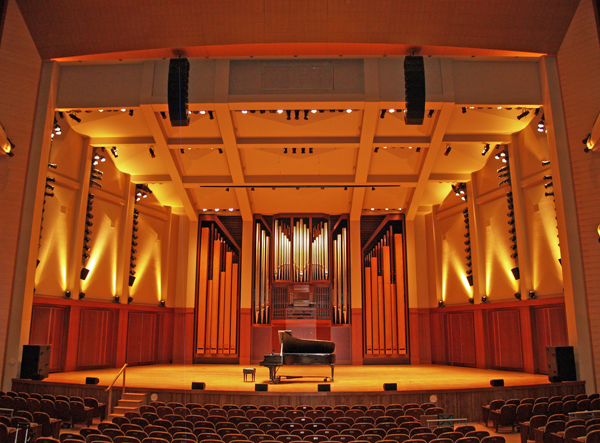 Taper Auditorium at Benaroya Hall with new d&b audiotechnik V-Series arrays in place above the proscenium.

“It’s a learning exercise,” he continues. “We recommend and provide listening material—specific tracks of differing musical styles and types, and then we issue suggestions on how to listen, along with a comment sheet. We attend these sessions and listen too, and work in conjunction with the various manufacturers, (four in this instance made it to the listening sessions), making sure they work toward the specific results required.”

Having reached a consensus on what was acceptable, Jaffe Holden then designed the new system to function effectively within a hall with a two and a half second reverberation and no variable acoustic control. “Run it (the system) too hard and it’s going to take off,” says Turpin. “Less is more when choosing the right box for the room, and pattern control is key.”

“We obviously entered a dialogue with d&b’s office in North Carolina,” Anderson notes. “But Mark (Turpin) already had a lot of experience in other venues with d&b systems. He made the installation design calculations, and tuned and commissioned the system, sharing and discussing every decision along the way.”

Jonathan Stoverud-Myers, who led the project for Carlson Audio, was likewise involved. “We already knew the room well, having taken audio equipment in there for many shows,” he explains. “Our familiarity with the V-Series on a day-to-day basis meant we could proffer ideas to Mark and he was open to that, so for us it was a delight to work with such a complementary talent as his; we learned a lot in that respect.”