Illuminating The Dark Art: A Practical Step-By-Step Guide To Success With Wireless/RF

When approached systematically, managing RF for wireless microphone and IEM systems can actually be quite enjoyable in a nerdy kind of way!

On larger, complex shows and festivals, there’s usually a dedicated RF tech setting up and managing wireless systems, but on many tours it falls to the monitor engineer. While RF often gets referred to as a “dark art,” in truth it’s a science which, approached systematically, can actually be quite enjoyable in a nerdy kind of way!

While I’m by no means a mega RF boffin, in my 20-plus years of touring I’ve developed a practical step-by-step approach that has served me well and which I hope will help you too.

Use RF only where necessary. Some band members/performers need to be completely mobile and so wireless in-ear monitor (IEM) and/or microphone systems are a must. But consider who needs them – some musicians such as drummers and keyboard players probably won’t need to move, so they can be outfitted with a hardwired IEM pack. Check with them before assuming – there might be some acoustic part of the show where they move downstage and actually do need to be mobile after all – but don’t use RF unless it’s necessary.

Check what’s required where you’re going. Some countries require the purchase of licences for the specific frequencies you want to use on the dates you’ll be there; some have frequency bands which are banned from use; others have large unusable areas of the spectrum which are blocked out for TV and phones; and in some places it’s an unregulated Wild West. Check with the local promoter about the rules where you’re going, and/or this information is usually easily accessible online – forewarned is forearmed, and choose frequency bands and book licenses accordingly. 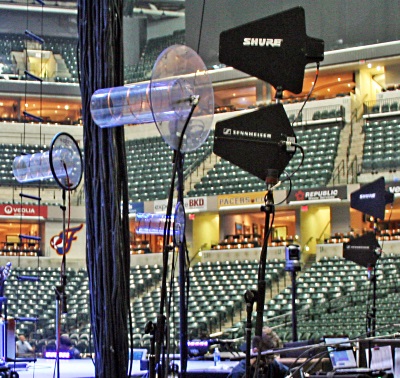 Make sure you have the right tools for the job. Just because a transmitter and receiver from different manufacturers are in the same frequency range and appear to work together, it doesn’t mean they’re compatible.

Compansion (compression > expansion) is the process by which a signal is compressed before transmission, and then re-expanded in the receiver. It’s important for the compansion circuitry in a system to be compatible with its “other half” for optimum performance and signal-to-noise ratio, so make sure transmitters and receivers are designed to be used together.

The broader the range of frequencies that systems can be tuned to, the more options once you hit the road, and in these days of governments selling off the airwaves to digital TV and mobile phone providers, you do need options. Bear in mind that an antenna combiner is a crucial part of the chain – if it dies, you lose everything going into it. It’s not common but it does happen, and it’s a potential show stopper, so consider carrying a spare that sits directly above or below the active unit in the rack that can be quickly swapped in if needed.

Get the right personal tools. I highly recommend investing in a handheld scanner if you tour and use RF regularly. In some places you will switch on your receivers to see a hot mess of RF coming from who knows where, and without a visual of what’s going on in the spectrum you’re flying blind. I’ve had my little scanner in my fly-kit for years and it’s saved me on more occasions than I can count. 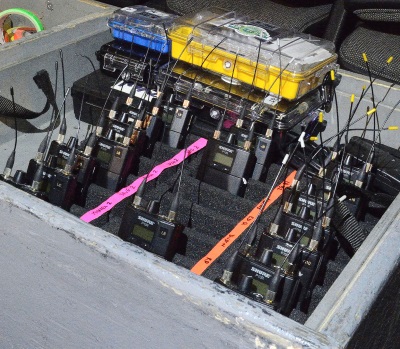 Lay the groundwork. Systems have a number of variables such as gain/sensitivity, squelch, pilot tone, EQ boosts, limiter, mono/stereo and so on. Set all of these variables the same, and if you plan to use the sync function for fast tuning of mics and IEM packs, ensure that you’ve chosen exactly what parameters you want to include in the sync.

Squelch is a muting mechanism that silences the audio output of a receiver should an erroneous signal cut across it. This is a good thing – that signal can be a lot louder than the desired one (i.e., the IEM mix) and can give the listener a nasty blast of noise.

Pilot tone is a “secret code” embedded into a radio signal, which takes the form of a tone inaudible to the human ear. The wireless receiver must ‘hear’ the pilot tone in the transmitter signal before allowing it to pass through the squelch controls. In this way the pilot tone prevents the receiver from passing unwanted audio and noise. (Be aware that if you’re transmitting in mono, a pilot tone will not function and you need to switch it off or the system won’t pass audio).

Becky Pell is a monitor engineer with more than 20 years of experience in live sound. She toured as a monitor and RF tech with Black Crowes, Travis and Kylie Minogue before moving behind the desk to mix monitors for artists such as Aha, Muse, Westlife, Anastacia and Take That. Read more from Becky at SoundGirls.org.
All Posts
Top Stories
Explore All Study Hall