As range ratio rises, the aim point gradually moves upward toward the farthest point. A range ratio of 1.4 (3 dB) moves the aim point upward by a factor of 1.4 (+40 percent) to 35 degrees (10 degrees above the original aim). Increasing the ratio further raises the aim until the 2:1 limit is reached, and the loudspeaker is aiming at 50 degrees (VTOP).

Horizontal Coverage Angle
There are three logical points to evaluate coverage: start, middle and end (Figure 3). If we use the start, our loudspeaker covers the front fully but is too wide for every row beyond. We may drown in reflections as coverage overflows to the side walls. 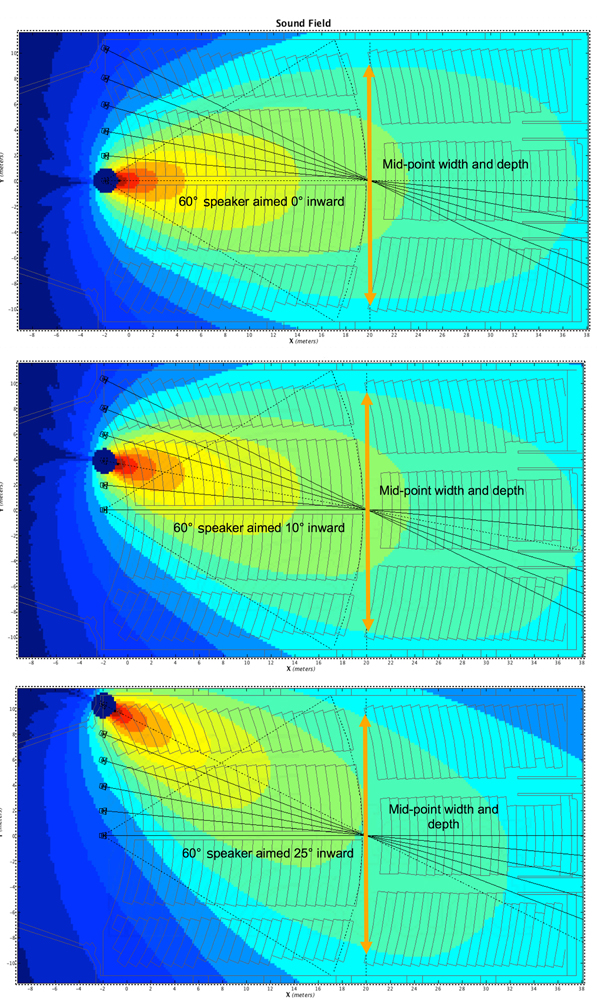 The opposite extreme is the rear width as reference. We have just enough coverage across the back (6 dB variance) and not enough anywhere else. Reflections are minimized, but tell that to the half of the audience that has no coverage.

Using the mid-point width as the reference evens out the errors. The result is 6 dB of level variance across the midpoint depth. If the shape is a simple rectangle then the front half will be under-covered and back half over-covered in equal proportion.

Reflection risk rises in the rear while coverage gap risk rises in front. The gaps in the front corners can be reduced if the loudspeaker is raised in the vertical plane (which expands the effective coverage width).

Alternatively we can beg for fill loudspeakers to plug the gaps. Both the underage and overage errors are reduced if the room has expanding splay walls.

Vertical Coverage Angle
The vertical aim was determined above and we will reuse the 50-degree coverage shape example (Figure 4). The minimum variance coverage angle is found by range ratio multiplication of the target angular spread. 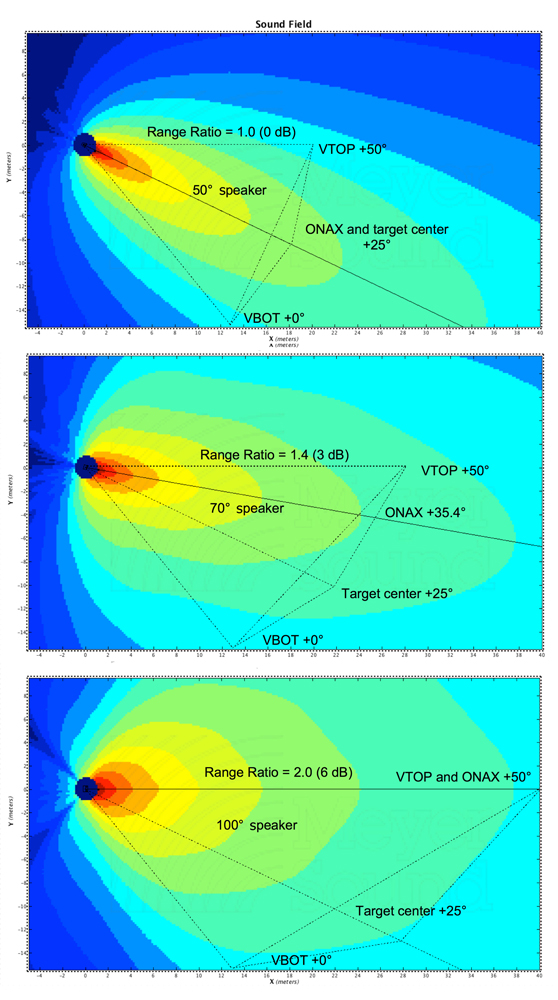 If the ratio is 1:1, then the loudspeaker coverage angle equals the target angle: 50 degrees. The ONAX location will be 0 dB and the VTOP and VBOT locations will each be –6 dB. A wider loudspeaker will reduce the level variance, which can be weighed against the potential for increased reflections.

ONAX is now at VTOP and both are -6 dB. VBOT is also -6 dB. Level variance is minimized while risk of reflections is maximized. If the reflections are too great then a single loudspeaker approach should be abandoned in favor of an array.

Bob McCarthy has been designing and tuning sound systems for over 30 years. His book Sound Systems: Design and Optimization is available at Focal Press (www.focalpress.com). He lives in NYC and is the director of system optimization for Meyer Sound.

Bob has been designing and tuning sound systems for over 30 years. The third edition of his book Sound Systems: Design and Optimization is available from Focal Press. He lives in NYC and is the director of system optimization for Meyer Sound.
All Posts
PrevPreviousCommunity Professional R-Series Loudspeakers Deployed At Three World Cup 2014 Stadiums
NextAKG Debuts DMSTetrad Digital Wireless Microphone System With 128-Bit EncryptionNext
Top Stories
Explore All Study Hall

Understanding the strengths and weaknesses of each type of amplifier and selecting one that makes sense for the application.

In The Studio: A Variety Of Techniques To Analyze A Hit Song

If you really want to understand an audio recording and hear it in a new way, here are a few pointers on what to listen ...read more →