Clark outfits Frisco, Texas worship team with KLANG:fabrik, offering up to 56 input channels via Dante, MADI and ADAT Lightpipe to create up to 16 mixes.

As a general rule, when houses of worship are considering adopting new audio technologies, those decisions are typically driven by outside “experts.” Sure, AVL and praise teams may have personal brand preferences as well as intimate knowledge about the particular needs of their worship spaces, but when it comes to brand new tech, consultants and contractors are often trusted to call all of the shots.

But not always, as is the case of Frisco, Texas’ Hope Fellowship Church and its new KLANG:fabrik 3D in-ear monitor mixing system from KLANG:technologies.

Glenn Setchfield is a design engineer for Georgia-based Clark, an audio, lighting and video provider focused on serving houses of worship and their production needs. When asked about what drove the decision to integrate the KLANG system into the church’s new Frisco East campus—a full install that also included a DiGiCo SD12—he gave 100 percent of the credit to Hope Fellowship Church technical production director Derek Milton and his team.

“They approached us really excited about the product,” Setchfield notes. “They had seen it in the Group One booth at a trade show when they were demo’ing the SD12 and knew they wanted it before we really even got started with the design.” (Group One distributes both DiGiCo and KLANG in the US.) 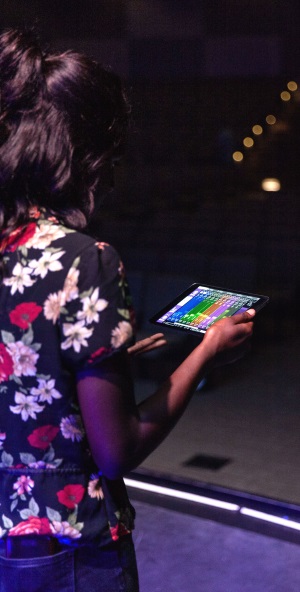 Milton’s initial desire to give the KLANG system a spin was driven, in part, by his previous experience with what is considered the “industry standard” personal monitoring system. “I had used the system that you most often see in churches many times, and I knew that was not what we wanted. Both the stage clutter of a bunch of personal mixers on mic stands and the expense of all that hardware was something that we wanted to avoid. Instead, a powerful system that our worship musicians could easily control via their own mobile devices was attractive right from the start.”

The KLANG:fabrik is a two-rack-space unit that can take up to 56 input channels via Dante, MADI and ADAT Lightpipe—or a combination of them—and create up to 16 individual mixes. It offers flexible routing for mixes as well as all digital inputs to analog XLR outputs or any of the digital formats to connect Dante-enabled KLANG:quelle headphone amps or IEM wireless systems. By using the manufacturer’s KLANG:app—available at no cost for iOS, Android, PC and Mac devices—users can not only create their own mixes, but can also place each sound source in a 3D sound field around their head that includes front and back plus up and down placement in addition to left-right. Of course, it also offers standard stereo mixing as well.

Setchfield was quickly converted as soon as he saw the EQ interface. “The graphical way the EQ is set up is so great for musicians who are not really technical,” he says. “And the system at Hope Fellowship is totally set up around the single front of house console with no separate monitor desk. The KLANG system provides parametric control over each channel, even when there is no dedicated monitor console. And the parametric interface is simple and graphical. Users can touch the screen, adjust the tonality and strength of an EQ curve and immediately hear the difference. It’s a big part of what allows house of worship engineers using the KLANG system to concentrate on the sound coming off the stage and the worship experience of the congregation instead of spending time and attention trying to make a high hat sound ‘right’ for the musicians on the stage. It allows them to put their attention where it belongs.”

At the recent InfoComm show in Las Vegas, KLANG introduced version 3.1 of its OS, which, in addition to bringing actual fader-based physical control for those who want it via the Mackie MCU, brings increased channel count when the EQs are active. The new update expands channel count when using the EQs by over 20 percent. Running at 48 kHz and feeding eight mixes, the system can handle up to 23 inputs, and additional DSP and mixes can be obtained by cascading more KLANG:fabrik or KLANG:vier units.

For the team at Hope Fellowship, the adoption of the KLANG system also ended up saving them money. “When Group One’s Ryan Shelton came out to demo the DiGiCo SD12, he asked if we wanted to check out the KLANG system as well. I did some digging around on their website and was intrigued. When demoing, we were really on the fence about whether we could do this with just one console, but adopting the KLANG:fabrik allowed us to do everything we needed for a typical service with just the single front of house desk, which was a big part of our decision.”

KLANG’s vaunted 3D capability was more of an added bonus, Milton reports, and the real confirmation that Hope Fellowship had made the right decision had little to do with technology, itself.

“We opened this new broadcast campus in March, and at the NAMM show in January, I got to hang out with the KLANG guys a little bit,” he says. “They are just hyper-focused on their user base and invited us to let them know how things were working out so that they could respond to any concerns, no matter how small, via workflow proposals or even updates to the KLANG:app. That focus on the user experience is what really sold us on the system.”

Parking lot at Experience Christian Center in Orlando assumes a “drive-in theater” approach for services with reinforcement via Aero-20A arrays and LX-218 subwoofers.